You are here: Home / Children and Young Adult Books / Suzie Sparkle and the Magic Book by Steve Moran 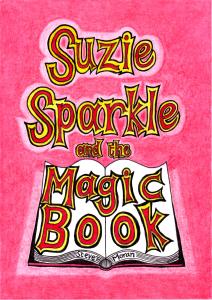 Suzie Sparkle had always loved reading. It wasn’t surprising, since her father owned a bookshop. What she liked best was the feeling of being carried away to another world, a world of make-believe and imagination.
It was a safe way to experience adventure, excitement and danger.
At least, it was until they collected THAT book.
They got it from a woman who looked like a witch, and who lived in the most dangerous part of town.
It was an old book, with an air of mystery about it.
Suzie couldn’t wait to get it home and start deciphering the faded old writing on its stiff and dusty pages.
So when she finally sat down with it, all on her own, she accidentally discovered another, dangerous way to be taken to other worlds – worlds of magic, fantasy and deadly peril……

Come and join Suzie Sparkle as she explores the worlds within the mysterious book, and faces a threat that could mean the end of both herself and her brother….

What Inspired You to Write Your Book?
When I read a book I really like, I feel as though I am actually going into the story it’s telling. This idea fascinated me, so I decided to write a book about a girl to whom that literally did happen – when she read the book, she was physically (and magically!) sucked into it.
This immediately raised lots of questions – was this an accident, or was someone doing it to her on purpose? When she went into a story, how long was she missing from the real world? And was she the only one who could do it? In answering all these (and other) questions, the story unfolded in a quite amazing way. When I finally wrote the end, I hadn’t foreseen it when I was writing the beginning!

How Did You Come up With Your Characters?
Suzie Sparkle was the starting point, and having thought of her, well, she needed parents, and a brother, and a school to go to. And once she had the Magic Book in hand, well, then the story needed a villain, and then the characters she met inside the book were determined by what story she went into, and so it unfolded. One character followed another in an almost logical sequence!

Book Sample
Chapter 1
A Mysterious Journey
Suzie Sparkle sat in the passenger seat of her dad’s car and played with the mice. They were remarkably friendly considering they’d never met her before.
“They’re so sweet, dad,” she said. “Can’t we keep them?”
“No, darling,” he replied, carefully scanning the road ahead. He’d never driven in this part of town before. Deepdark, it was called. He was beginning to understand why. “I’m buying the book with them.”
The three mice were in a plastic container on Suzie’s knee. The lid – with air-holes punched in it so that they could breathe – had been taken off, and they were sniffing her fingers. “This one’s really friendly,” she said, carefully picking up a piebald mouse. He was white with black patches all over his body. He looked particularly cute because his face was white and both of his ears were black. He wiggled his nose at Suzie, and his whiskers twitched. It looked as though he was trying to talk.
“Please dad,” begged Suzie, “can’t we keep just this one?”
She gently placed him back in the box with the other two mice. They were grey.
“No, sweetheart,” said dad firmly. “Now stop talking. I have to find this house.” Outside the light was fading. It was evening, and not many streetlights were working. “I don’t like Deepdark,” he said. “It’s got a bad reputation.” As if in answer there was an ominous roll of thunder from the thick, black clouds overhead. “And it’s going to rain,” he added.
“Then why are we here at all?” asked Suzie. She wasn’t looking at the street but was stroking the black and white mouse. He seemed to like it. “I’m going to call you Nosey,” she said, “because you’ve got a twitchy one.” The mouse twitched his nose in reply. “You see! I think he likes that,” she said, and giggled.
“We’re here for the book,” said dad, replying to her question at last. “And I think we’ve nearly found it,” he added, looking at the scrap of paper in his hand as he turned into World’s End Lane. “Not a nice name for a street,” he murmured, “but an appropriate one.”
He was right. If the district of Deepdark was gloomy, World’s End Lane was positively depressing, if not completely miserable. For the first time Suzie noticed the world outside the car.
“Dad!” she exclaimed, suddenly. The mice jumped. “Are you sure this is the right place? It looks really weird here!”
She had a point. The houses were derelict, with windows that were broken and doors that were hanging off their hinges. They appeared to have no power, either. The only light came from the fires that burned in the gardens and yards, which had crowds of strange looking people huddled around them. On some of the fires she could see cooking pots, and on others pieces of burning furniture. Everywhere the firelight reflected in eyes, eyes of all shapes and sizes, eyes which followed them as they drove down the street.
Dad didn’t seem to notice. He was only looking at the house numbers on the gates.
“Dad?” said Suzie again, but this time in a nervous whisper. “Dad, I think we’re in the wrong place. This one looks pretty dangerous to me.”
The thunder rumbled again, as if to confirm her fears. It was nearer this time.
“Nonsense, Suzie. Anyway, we’ll soon be out of here. This is the house.” He stopped the car outside number thirteen. “Give me the mice.”
Suzie stroked the piebald mouse one last time. “Bye bye Nosey,” she whispered affectionately. “See you again one day, I hope.” He twitched his nose in reply, and then she carefully placed the lid on the box and handed it to dad.
He took it, opened the door and stepped out of the car. For the first time he realized what kind of a neighbourhood they were in. “I think you’d better stay in there, Suzie,” he said, as he looked up and down the street. “Don’t worry, I’ll lock the door.”
“No way,” she replied, crawling across the driver’s seat and jumping out onto the pavement. “I’m not staying in there all by myself!”
“All right then,” he said. “But we’d better hurry. I don’t think we should stay in this place any longer than we have to!”
All along the street, on both sides of the road, eyes were turned towards them. Many reflected the firelight, but some of them had a light of their own. The only sounds were that of the crackling fires and the deep, continuous rumble of thunder.
“Is this it?” Suzie asked, taking hold of dad’s free hand.
“I think so,” he replied. They both stood there beside the car and gazed at number thirteen in silence.
It looked as though it was in the wrong place. All the other houses in the street were dark, gloomy and neglected. They looked as though their inhabitants had long abandoned them to huddle around the fires burning in their gardens.
Number thirteen, however, was completely different. Even in the gloom it seemed to glow with a light of its own. A soft, red glow, giving colour and warmth to its surroundings. It looked homely and comforting, and seemed to be the only civilized place on the whole street.
There was one other feature that distinguished it from all the other houses.
It wasn’t just that it was taller, narrower and in much better condition.
It wasn’t just that it was freshly painted and had curtains in the windows.
It wasn’t just that the garden was well kept, with tidy rows of flowers.
No, the feature which distinguished it most of all from the other houses in the street was the enormous cross of sails fixed onto the front of the towering building.
It was a windmill.

About the Author:
I can remember looking at picture books when I was a very small child. Anything colourful captured my imagination. I also loved to look at Rupert the Bear and Noddy books, although I couldn’t read the text.
Then, one day, I asked my older brother – who already knew how to read – if he would read me a bedtime story. Not surprisingly – knowing older brothers – his reply was a resounding “No,” followed by “Why don’t you learn to read yourself?”
I was only four, so this was quite a challenge! Nevertheless, this was the goal I set myself.
When I finally achieved it – and I couldn’t tell you when it was – I started my own reading journey, which continues to this day.
I can remember when we lived next door to the local public library. In those days we were allowed to take out only two books at a time, so, on a Saturday morning, I would go and take out two books. I would sit down and read them all morning, so that at lunch time I could go back and change them for two more. Then I would sit down and read these all afternoon, so that I could go back and change them for two more just before the library closed at 5.30pm. Then, at least, I would have two new books to keep me occupied on Sunday!
My fascination with books has never faded, and I always have one with me – sometimes two or more! I love the world of imagination they open up to me.
I love it so much that I decided to cross the bridge from reader to author so that I could create my own worlds of imagination, and share them with you!
And so here I am!
The stories I like to live in are ideal for children in the age range of 8 years to 12 years, and for those who love children’s stories, whatever age they may be!
I hope you enjoy reading my books as much as I enjoy writing them!