You are here: Home / Autobiographies, Biographies & Memoirs / Surviving To Twenty-One by Skip Williams 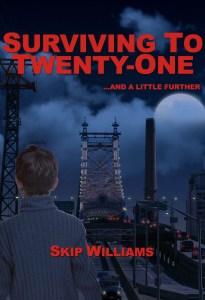 What inspired you to write your memoir?
My paternal grandfather , Alban Williams, was born in the late 1880’s. The West was still the Wild West. Born in Reno, Nevada , he lived in the West all his life. I was able to meet and stay with him for only about a month when I was nine years old. He was a quiet and reserved gentleman who never mentioned his youth. My father Jack had told me that he was a card dealer in Reno, a lumberjack in Northern California, an auto mechanic, a deputy sheriff, and quite a few other things in an effort to survive the Great Depression.
I would have loved to find any memoir, record, notes; anything that described his life, which I’m sure would have been totally fascinating, if just for historical value. He left no written trace of his life when he passed away in 1969 at the age of seventy-nine. That’s what inspired this memoir. Everything written in this autobiography is true and derives from vivid memories of my time growing up in New York City. At my current age I forget what I had for breakfast, but memories of my youth are forever etched in my memory for reasons you will fully understand. Anything I do not remember clearly was omitted intentionally. It would defeat my purpose to fabricate or embellish anything.
We are all born alone and all die alone. Between those two points a myriad of decisions are made by each of us. One hopes that in the long run more good ones are made than bad ones.
It’s a toss-up as to which prevailed in my early life

About your Book:
Surviving To Twenty-One
Synopsis
This is the true memoir of a young boy initially abandoned by his birth mother in New York City in the 1950’s. The story derives from vivid memories the author has of learning survival skills and dealing with many traumatic scenarios which were to unfold during his turbulent youth. My wife has been encouraging to write my story for many years, but it was never the right time and the pressures of daily life interfered. When we retired I sat down and put my story to paper over the course of a year. It was first self-published in 2014 but after many reviews I felt it could be improved upon so a second and final edition was published in 2015.
Raised by my maternal grandmother in a tough section of Queens, NY I encountered many life-threatening experiences and decisions that would alter the course of my adult life. Some of these incidences were to become the source of psychological problems which still haunt me to the current day.
With very little adult guidance I learned to be independent at a formative young age. Most of the content involves teen rebellion, first love, and reflections of the era that was the 1950′ and 1960’s in New York City. Both positive and negative experiences were included in order to present the whole story.
All of the tales related in the text are true since any fabrication would ultimately defeat my purpose.
Thank you for considering my entry. Skip Williams

How did you decide how to publish your book and where is it published through:
I chose a local publisher (OLBbooks.com) for personal contact and coordination.

How do you see writing a Memoir as different from writing other genres of books?
I used my personal, etched memories of traumatic youth experiences. I do not write fiction.

Skip was born in Santa Rosa, California to two show business performers, but was raised by his maternal grandmother in Queens, NYC. After a tumultuous and rough childhood he was drafted into the Army Infantry and served during the Vietnam war. After being discharged he earned his college degree thanks to the GI bill. He was unable to write his childhood story until his retirement in 2012. Luckily he was able to remember details vividly due to the traumatic nature of the experiences.