You are here: Home / Fiction / Surviving Anna by Hazel Buchanan 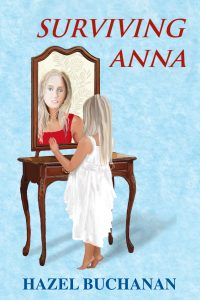 Surviving Anna tells the story of Laura Vine as she embarks on the most important journey of her life. Outwardly, Laura is devoted to her career and embraces her independent Sydney lifestyle. But a childhood tragedy has left its mark and Laura has a secret she has never dared to share. Her grief lies deeply buried, unexplored and unresolved.

Meeting businessman Adam Moretti shakes Laura’s composure and disrupts the status quo, triggering the return of her recurring childhood nightmare. Adam recognizes Laura’s vulnerability, without understanding its cause. Frustrated by her strange inhibitions and, at times, unfathomable behaviour, he persuades her to start facing up to her childhood trauma.

Laura’s quest is charged with anger, grief and confusion, but, having started, she becomes obsessed with unravelling the mysteries of the past. Shocked by the story she uncovers, Laura finds herself confronted with questions about her own capacity to love.

A thought-provoking, suspenseful and, at times, tragic story, Surviving Anna explores both the consequences of betrayal and the critical importance of parental love for a child’s sense of self-worth.

What Inspired You to Write Your Book?
I was only five when I learned of the harrowing event that would later form the basis for my first book. I grew up wondering how such a tragedy could have happened and what the long term consequences would be. As an adult, the story stayed with me. I felt the need for answers but was never able to discover the facts. In the end, I decided to write my own version. Surviving Anna is the result.

How Did You Come up With Your Characters?
Laura appeared to me first as a small child and later as a troubled teenager. It was only when she became a woman herself that her story truly began to crystallize. Adam naturally evolved as the businessman she meets and reluctantly becomes romantically involved with. It is only with Adam’s love, support and persistence that Laura embarks on the journey of a lifetime to discover why the tragedy that blighted her childhood occurred.

On a balmy spring evening in early November, Laura left
her office and spotted Adam’s car parked further down
the street. He jumped out as she approached.
“Do you really want to eat out?” he asked, wrapping her in
his arms and breathing in the scent of her.
She laughed, relieved to have him back. His latest trip to the
States had unexpectedly segued into a visit to Western Australia,
and for Laura, as things had turned out, his week-long sojourn
had not been well-timed.
“Yes! I was lucky to get a booking. Besides, we need to talk.”
Khun Pun Thai, newly-opened in Mosman, was unprepossessing
from the street. But they stepped across the threshold onto
polished tallowwood floorboards which, gleaming golden under
soft concealed lighting, reflected heavy dark timber sideboards
standing out from walls of clotted cream. Against a backdrop of
crisp white linen, glassware and cutlery glinted, vying in
brilliance with jet black lacquered chairs.
“So, what have you been up to in Perth?” asked Laura, once
their orders had been taken.
“Long story,” said Adam. “It’ll keep. How’s your week been?”
“Pretty horrible, actually. I’ve had a bit of an issue at work –
with Martin McDougall.”
“Sorry, that name’s not ringing any bells.”
“He’s the Business Development Manager. He and I have
never seen eye-to-eye, but he’s particularly had it in for me
recently. We had our executive meeting on Friday, while Jack
Shaw, the CEO, was over from the States. It rapidly turned into
a heated discussion about planning for the year ahead. Well, you
know what I think – we’ve got to expand our horizons if we
want to stay competitive. But Martin never wants to try anything
new, especially if the suggestion’s come from me.”
“This is your Business Development Manager?”
Laura grinned ruefully. “Martin’s an idiot. But he managed to
make such a song and dance about how overextended the
company is, he convinced Jack Shaw that we need to consolidate.
There’ll be a few changes, but no real growth until at least halfway
through next year.”
“Frustrating for you.”
“Yes. I was coping with that – until Martin dobbed me in about
you.”
Adam’s forehead wrinkled in confusion. “What do you mean,
dobbed you in?”
“It’s his way of getting back at me.”
“For?”
“For meeting with you initially when he was off sick – amongst
other things. He’s supposed to interview prospective clients. I trod
on his toes.”
“So what did he say at the meeting?”
“Oh, well both of us were pretty fired-up, and he couldn’t
resist making a couple of stage whispered asides about you and
me. Jack put two and two together.”
Adam pulled a face, inhaling audibly. “I bet that went down well.”
“Like a lead balloon,” said Laura, flushing at the memory of
her interview with her boss the afternoon before. “I got my wrist
well and truly slapped. Oh – and Gavin’s your new Project
Manager.”
Setting down his fork, Adam took up Laura’s hand and sought
her eyes with his. Her attempt at lightheartedness had not
deceived him. “I’m sorry I wasn’t here for you,” he told her
gently.
“There wasn’t much you could have done, to be honest. And
maybe, in some ways, what’s happened isn’t such a bad thing.
It’s made me face up to just how much of my life IMTP has
consumed. It’s time for that to change.”
“What are you saying? You’re not going to quit?”
Laura gave a non-committal shrug. “When I think of the years
I’ve given to the company and all the leave I didn’t take… I can’t
believe how casually Jack dismissed my arguments and questioned
my judgement at the meeting, quite aside from the way he carried
on about me having a relationship with you! Anyway, the upshot
is I’ve decided to take all the leave I’ve got owing, and spend
Christmas with my sister in England. She actually suggested it
when I was talking to her the other day. That’s what I wanted to
discuss with you. Jess has invited you too.”
“Has she?” Finished with his meal, Adam was sitting with his
elbows on the table, hands clasped in front of him, one thumb
stroking his lower lip.
“What do you think?” urged Laura. “Will you come?”
“Is that a good idea?” Adam wondered doubtfully. “Are you
even sure you want me to? Before I went away, I got the
impression that…”
“That what?”
“Oh – that you were maybe having doubts.”
“I’m sorry,” said Laura, studying her plate. “I wasn’t expecting
you to bring up all that stuff about commitment and – things.”
“By ‘things’, do you mean children?”
She gave a short vigorous shake of her head. “I don’t want to
go there, Adam. Please.”
“I got that message loud and clear. What I haven’t been able
to figure out is how you see our relationship progressing. If at
all.”
Still avoiding his gaze, Laura ran her fingers through her hair,
gathering it into a twist. “I’m happy the way things are. I don’t
want anything to change.”
“Right.” He nodded calmly, with a smile of resignation. “I see.”
“So what about England? Jess is keen to meet you. And I
would like you to come.”
Adam hesitated only very briefly. “Okay. If you’re sure.”

“Adam?” said Laura. Lying beside him, with her head on his
shoulder and encircled by his arm, she felt relaxed for the first
time in a week.
“Hmm?” He sounded sleepy.
“Why did you go to Perth?”
She was stroking his chest with her fingertips. He stopped
her by closing a hand over hers.
“Tony was in trouble. I went to try and sort it out.” He
pushed himself into a sitting position and rearranged the pillows.
“What kind of trouble? Is he all right?”
Adam shrugged. “I’ve done what I can. The rest is up to
him,” he said skeptically. “Tony managed to get himself
arrested on Saturday night – for pushing drugs in a Freemantle
nightclub.”
Sitting up next to Adam, Laura studied him in silence,
uncertain what to say.
“It seems that Tony ran up a heap of debts at Uni, drinking
and gambling,” said Adam. “He’s a bright boy, more than
capable of completing an engineering degree, but he was only
ever interested in partying. They kicked him off the course.”
“I see. Did he start taking drugs at University?”
“He claims he’s never been a user. Apparently, I’m supposed
to be grateful for that,” Adam said bitterly, recalling Susan’s
hysterical ranting when they had met to discuss what could be
done for their errant son. “Strangely, gratitude is not an emotion
that springs to mind when I think about Tony right now.”
“No.” Scorn and resentment were plain in Adam’s tone.
Laura had not detected gratitude. “So what could you do?”
Closing his eyes, Adam sighed. “There was never any
question of Tony not pleading guilty. He was caught with sixty-odd
ecstasy tablets in his pocket. The only real issue was
whether he could be kept out of prison. I succeeded in that, at
least.” He dropped his head and buried a hand in his hair. “My
God, what a mess! Nonno must be turning in his grave.”