“Supernatural Hero (Action & Adventure) (Comics & Graphic Novels) by Eran Gadot is a story that children can relate to easily. Andy is the typical nerd you will come across in your class. He is in grade six, skinny, wears glasses, and then falls in love with Zoe, the prettiest girl in his class. The twist in the story happens when Andy’s grandfather dies and turns into a ghost. Now Andy has the power of seeing ghosts and communicating with them. He decides to use that power to the fullest. The paranormal activities make Andy a supernatural hero and the book is about the transformation of nerd Andy into a supernatural hero.

It is a very entertaining theme where one can relate to Andy and his nerdy behavior, which sees him being the butt of many jokes in class. The transformation of this nerdy boy is done very well and the change is fluid. It is the type of story that kids will find fascinating. The black and white sketches are beautiful and they give an individuality to the characters and the scenes. The manner in which Andy handles the situations in his life is noteworthy.

The theme covers everything that is part of a child’s life: parents, school, friends, bullies, pretty girl, and much more. It is an entertaining read with a relatable character and exciting adventures that make it a fast paced story. Now from the nerd that he was, will this supernatural hero get the girl?” 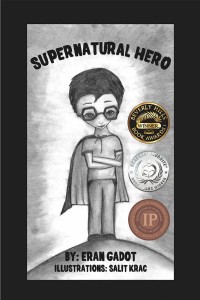 About the Author:
Eran Gadot is an award winning author. Gadot is married and a father to three children and two cats. He is proud to have ADHD and loves the fact that writing is the only way for him to focus on one thing. In his younger years he owned Pet Coffee, the first coffee place for dogs and their owners. He then opened a new coffee place, No Bill, where customers were free to pay as they please. He was the co-founder and CEO of a small high-tech company which was later sold to Playtech.
He is currently one of the owners of an advertising agency, works as the head of the creative department. His love for sports got him to be owner of a sports live scores website and an enthusiastic tennis player. He also has helped producing several independent films.

“I can’t remember a time when I didn’t write. I write about everything. As far as I’m concerned what isn’t written down simply isn’t important. Writing is in my blood. The words inside me are constantly trying to burst out, however much I may try to focus on other things.

My greatest dream was always to write a book for children, whose honesty and innocence constantly overwhelm me. It’s thanks to children that my own inner child is sustained and never ceases to make his presence felt.

When my son started sixth grade and embarked on the journey known as adolescence my urge to write a book for children became impossible to ignore. His experiences granted me inspiration as well as fantastic ideas for my book.

As I began to write, the reactions of my son and his friends totally amazed me and I understood that I was on the right path. I completed my book, which became the first in a series of six. The responses from my readers renew my energy daily and strengthen my deep motivation to continue to write.

For me, writing is not a hobby but a vocation. I simply have to write. And I still feel like a boy, with a tremendous desire to realize my dreams, break new ground and transform the impossible into the possible.”