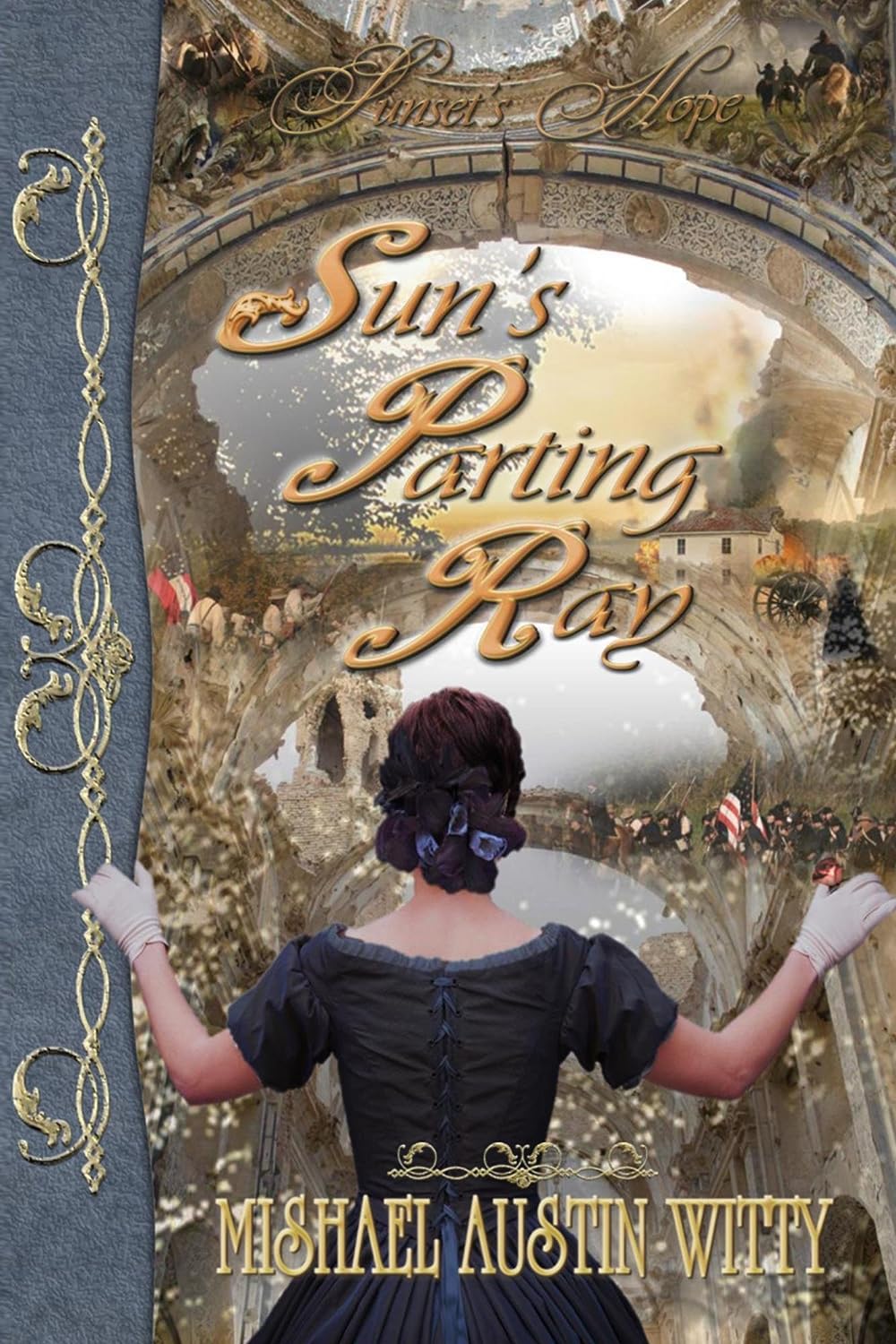 Just follow your heart, and everything will turn out the way it is supposed to…

This is the way Jane Addison has always lived her life, but it doesn’t seem like anything ever turns out according to what her heart truly desires. This is especially true when her husband is gunned down by Confederate soldiers on their eighth wedding anniversary.

Then, when she meets and falls in love with her late husband’s married best friend, things really get confusing for the young widow.

Will she and Cole follow their hearts and give up their homes, their lives, and everything they believe in? Or will they deny their feelings to protect their families? Which will they choose at the SUN’S PARTING RAY?

~And if a house be divided against itself, that house cannot stand.~ (Mark 3:25)

What Inspired You to Write Your Book?
My own genealogy research and the family history details I uncovered through it.

How Did You Come up With Your Characters?
They are based on my great-great-great-grandparents, their family members, and the townspeople who lived around them. Most names have been changed, and most of the details have been completely made up, except for some birthdays and the wedding anniversary of Jane and her husband (and the date of his death).

Book Sample
The thought of Ben coming home reminded her of how she had not started supper yet. She sighed, looking at the pieces of broken glass on the ground next to the forgotten mirror frame. John Wade and Martha had already run off to play some other game in the open field back behind the house. Jane was glad, at least, that they were no longer in danger from the broken glass. Still, it’s best not to leave it to chance. I should deal with this before supper.

As she knelt down, the memory of that ancient superstition danced though her head. Seven years bad luck. She tried to shake the thought away, but it didn’t want to leave. Instead, it led to another memory. That night at Grandma Calvert’s house thirteen years ago, when the big mirror dropped off the wall in the foyer all by itself. Her mother later blamed her for it, but she hadn’t been anywhere near it. Lelia, her grandmother’s old housekeeper, was in the hallway at the time, so she knew Jane had been nowhere near that mirror.

Lelia’s words flowed through her mind now. Someone in this house is gon’ die tonight. And, the next morning, Jane’s mother told her that Grandma Calvert had passed away in her sleep.
She shuddered as she picked up the last broken piece of glass and the hand mirror frame and headed back toward the front of her house. She listened for the sounds of John Wade and Martha playing. She could hear them, playing amiably for once. But then she caught the sound of something else.

Horse hooves, coming at a fast clip down the lane.

Who would come out here on horseback at this time of day? Jane hurried to the front porch and watched for the rider. She recognized the imposing figure on the gray gelding, silver badge gleaming in the sunlight. She gasped, and she almost dropped the glass she still held in her hands. Instead, she tightened her hold, and she could feel the sharp pricks of some of the edges as they made their way into her skin.

Her first thought was to protect her children from any news the county sheriff would bring, for a personal call from that man could only mean something bad had happened. She called to her two oldest children, who were happily oblivious to the impending crisis. “Martha! John! Come get in the house with Bill. Right now.”

Jane knew she sounded harsh, but at that moment, she didn’t care. Within seconds, Martha and John darted around the side of the house together, obeying without question. But they each cast one curious glance in the direction of the big man on horseback before silently scurrying into the house. They didn’t even look up at their agitated mother, who quietly and deliberately closed the maple wood door behind them.

Minutes later, Jane faced the sheriff alone. She tried to stifle the dread sitting like a rock in the pit of her stomach. She smiled and straightened to the most hospitable and welcoming posture she could muster.

“G…good afternoon, sheriff.” Jane’s voice quavered a little as she forced her gaze to meet the sad eyes of the lawman.

The big man dismounted and removed his hat as he approached Jane. “Afternoon, ma’am,” he mumbled. He lowered his head to stare down at his hat, twisting its brim in agitation.

Jane was a little perturbed at the man’s reticence. He had, after all, come out here for some reason. What was the reason? But she was her mother’s daughter, and the great southern matriarch had taught her a thing or two about manners. She waited a moment before deciding to engage the man with some southern hospitality. “Sheriff, may I offer you a drink of water from the well? Or there’s some coffee inside.”

The sheriff started at the offer. His hand never did leave the brim of his hat, though, and Jane feared that he would tear it right off. A shame. It looked to be an expensive hat. The sheriff shifted his bodyweight from his right leg to his left and back again. Jane began to wonder if he’d just headed out here to ask to use the outhouse, when he finally opened his mouth. “Mrs. Addison, this is not a social call.” He paused for a moment, and his top teeth tugged at his bottom lip. “Aw, hell, ma’am. I ain’t no good at this sort of thing, so I’ll just come right out and say it. Your husband is dead.”

About the Author:
Mishael Austin Witty is a professional editor and the internationally bestselling author of SHADOWS OF THINGS TO COME, a Christian thriller/suspense novel, and BELIEVE IN ME, a sweet contemporary romance/women’s fiction novella. In addition to these books, she has newly released a zombie fairy tale, CAMPANULA, which marks a departure from the usual for her, but it was great fun to write, and she already has plans for another.

She has, to date, published two short stories with Helping Hands Press: PROTECTING ZOE (Kathi Macias’s Twelve Days of Christmas, Volume Eleven) and THE SAN FRANCISCO WEDDING PLANNER, VOLUME 1: THE INITIAL CONSULTATION (a story that was written with the series’ five other authors). She is currently hard at work on her next installment of that series, which will be released in either May or June 2014.

She lives in Louisville, KY (where most of the action of CAMPANULA takes place), with her husband, two cats, and two daughters.