You are here: Home / Fiction / Fantasy / Suck it Up by Charissa Dufour 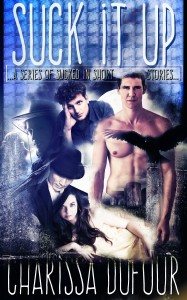 *This is a finished series*
A peasant in a 16th century Russian market.
A lawyer with a scheming wife.
A maiden forced into an arranged marriage.
A noble trapped in a life of duty.
A cowboy with a knack for train heists.
What do these people have in common? Each on is about to die, only to rise again. As vampires they will eventually unit against a common enemy, but for now they must first learn to survive their own transition.

This compilation of five short stories can be read at any point in the “Series That Just Plain Sucks.”

What Inspired You to Write Your Book?
My husband and I were sitting on the porch and he ask: What if Stephanie Meyer became a vampire and realized she knew nothing about being a vampire. As I progressed through the trilogy, some readers expressed interest in knowing how the other characters got turned into vampires.
This series of short stories covering how five characters got turned into vampires.

How Did You Come up With Your Characters?
My characters are a mixture of friends from real life and creations of my demented imagination.

Buy Suck it Up On Amazon