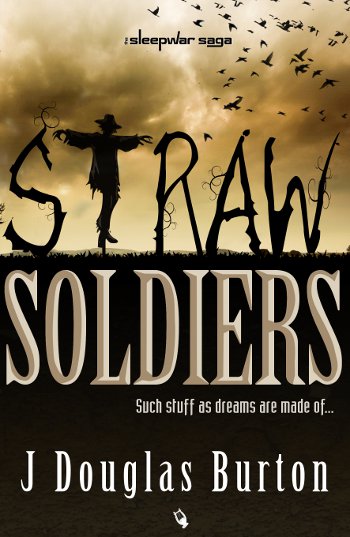 Six teenagers, strangers, from all across America. Nothing to connect any of them to the others.

So why do they find themselves together, in a strange part of the country, every time they sleep?

Kaz Harper has enough to worry about navigating high school and enduring her unhappy home life. The last thing she needs is something like this. But it doesn’t look like she’s getting a choice in the matter.

When living scarecrows start attacking Kaz and her newfound friends, she’ll be forced to learn whether her video game skills can translate into real life combat. And to try to discover the truth that lies behind this endless Sleepwar.

What Inspired You to Write Your Book?
Dreams are a powerful and strange thing. I rarely remember my dreams, but when I do they sometimes seem as real to me as waking life.

So, I thought, what if someone found that their dreams were real? And what if they shared this experience with others in the same boat?

This was the start of the concept for "The Sleepwar Saga", a series of 6 YA novels about a group of 6 teenagers who suddenly find that when they sleep, they appear to be dreaming of one another. And yet perhaps these are not dreams at all…

How Did You Come up With Your Characters?
As usual, my characters are partially inspired by the people around me (in this case, as my leads are teenagers, the cashiers I work with were the main source for this) but also are in large part defined by the needs of the story.

Plot is a malleable thing, but story is concrete. The story demands certain characters to tell itself, and I can hammer out the details once their types are established.

Book Sample
It was a nonsense idea, of course. A living scarecrow? Ridiculous!
But here in front of Kaz, shambling in a floppy, stop-and-go motion toward the group under the light of the moon, the animate scarecrow continued to come nearer.
Surely it was just a person inside a particularly convincing costume, despite the seemingly boneless sag of the arms and legs. Or perhaps this was the final proof that Kaz was only dreaming after all.
“Whoah,” Jason breathed, awe in his gentle whisper.
“Hold up there, pal,” Andy said firmly to the slouching figure, muscles taut in a confrontational stance. “What do you think you’re doing right now?”
The straw-stuffed shape with the blank burlap head said nothing in response, nor did it appear to react to Andy’s words; it merely kept ambling along in that jerky, angular gait.
“Stop right there, just for a second,” he demanded in a reasonable yet authoritative tone, but the scarecrow paid him no heed. Placing his palm gently against the blue plaid shirt of its chest now that the creature was upon him, Andy made to hold it back, but the scarecrow would have none of it.
Not even pausing in its advance, the monster placed both overly flexible arms around the wrist of the hand which was touching it, and effortlessly flipped Andy over onto his bare back against the hard, cold earth of the forest floor.
“Hey!” Jason cried over Andy’s groans of pain, and Kaz clapped her hands over her mouth in instant concern. “Not cool!”
Although Kaz wasn’t a proponent of real violence, she felt Jason’s subsequent punch to the scarecrow’s chest was more than deserved – but found herself very taken aback when the boy’s fist slipped right through the fabric of the creature’s chest and embedded itself deep inside the scarecrow.
Finally its advance halted, and with Jason’s arm emerging from the center of its torso the scarecrow merely tilted its featureless face to the side as though considering what was being done to it. For his part, Jason seemed to register both alarm and disgust simultaneously, and with some effort he withdrew his hand from inside his opponent, dragging with it a torrent of straw from deep within the beast’s body.
Definitely a scarecrow, then.