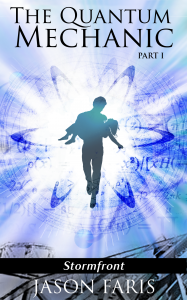 The first of five novellas that comprise book one of The Quantum Mechanic saga.

It’s the near future, and mankind’s long awaited convergence of technologies has faltered. Misguided efforts have created multiple crises across the globe, and spawned unthinkable atrocities. Thousands have died, millions are threatened, and international tensions run high. In an effort to reassure the public, the global community bans all research in these fields. Violations are dealt with harshly, and those responsible are designated as enemies of humanity. But rogue nations persist, and a secret project is launched that results in one of the most heinous acts of terrorism that the world has ever seen.

But on the day of the attacks everything changes… A man acts to rescue the little girl he loves, revealing superhuman abilities so terrifying that the world is left in shock. Now those responsible for the attack are seeking him, and a struggle is coming to define the future of mankind, and the fate of the world.

A series of serialized novels with bi-montly installments over a hundred pages each, the Quantum Mechanic is Faris’ debut effort in thoughtful science fiction.The series tells a complex tale, following the connections between multiple people across the course of troubled times. The power of faith, mankind’s reliance on science, love, and the nature of reality itself are all brought into question as characters are confronted with events that will determine the future of mankind.

Although it is his first literary effort, many readers have expressed having been deeply affected by Faris’ vision of the future. Rich with imagery, he delivers a story that quickly wraps you up, and hurls you into a world that is difficult to leave. It’s all delivered at a carefully measured pace, with a plot awash in explorations of quantum physics, transhumanism, nanotechnology, and theology. This fascinating reality is intricately complimented by a cast of well developed characters that readers have professed to deeply love… and hate.

Overall, The Quantum Mechanic is a fascinating, and rewarding journey for discriminating readers, and is highly recommended for anyone seeking a visionary peek into a world that may come sooner than we expect.

How Did You Come up With Your Characters?
The seemed to arise organically as I wrote, which is interesting to me because my readers speak a lot about the level of character development I do.

About the Author:
Jason is in his early forties and currently lives near the small Kentucky town he grew up in. He shares his home with a very patient wife, several children, and one small and incredibly neurotic dog.

<Links to Purchase eBooks
Link To Buy Stormfront: The Quantum Mechanic Part I On Amazon