You are here: Home / Fiction / Fantasy / Starlight: Book 1 of the Dark Elf War by William Stacey 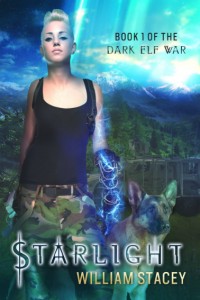 A secret power. The revival of magic. An ancient evil stirs.

Twenty-year-old university dropout Cassie Rogan has returned to her small British Columbia home. Tortured by an accident that killed her parents, she drifts, failing life at every turn. When an impossibly localized lightning storm hits the surrounding forest, Cassie discovers her supernatural side.

After centuries of atrophy, the forces of magic are flowing back into our world, and Cassie can wield arcane powers. Her life seems destined to turn around, until the downside of magic brings everything to a screeching halt. Horrifying mythical beasts now prowl the northern wilderness—including the Basilisk—an enormous eight-legged lizard that can turn its prey to stone.

Recruited by a secretive agency, Cassie must quickly master her powers to protect mankind. As she develops her skills, a dark power secretly watches from the shadows. The Fae Seelie (a.k.a. the Dark Elves)—humanity’s ancient enemy—have returned to settle the score.

What Inspired You to Write Your Book?
I’ve always been in love with cool concepts, like what if everyday people could cast a fireball spell at a group of orcs, and why can’t we do that? I guess we kind of can with video games, but I was looking for more. I wanted to tell a dystopian tale of a war between magic and technology where nothing is black and white and nothing is simple.

How Did You Come up With Your Characters?
Usually I start with a generic concept, then I find a picture that encapsulates that person for me. It’s always helpful to work off a picture, it helps you to get to know the person. Then, I create a bio and fill in all the backstory details I can. The problem is that as I write the story, the character develops and changes and becomes more than what I started with–but that’s all part of the magic.

Book Sample
Breathless with anticipation, her pulse racing, Cassie stood with the others in two tightly packed lines facing the entrance to the Jump Tube. Clyde stood next to her, rubbing himself against her leg, shivering and whining in fear. Paco never used a leash, so only Cassie’s reassuring presence kept the dog in place. If he bolted, this mission was going to be over before it began. Reaching down, she stroked his head, telling him everything was going to be all right—telling herself the same.

All of the remaining members of Task Force Devil were with her, a total of twelve soldiers led by Buck and Alex. Cassie stood just behind Elizabeth, so close she was breathing down her neck, as was Clara behind Cassie. She felt like a sardine—or, dressed in battle armor, like a turtle-sardine. Every time she moved, the bottom of the armor caught the skin of her abdomen and pinched it against her belt. Wearing all this kit sucked; being hot and uncomfortable sucked; having to pee sucked. But it was almost time to move. Their GPNVGs lenses were flipped up, but Dr. Simmons had warned them it would be dark when they arrived. No one knew what to expect on the other side, but the Jump Tube always opened in the exact same spot, and no one, including Dr. Simmons, could say why.

Am I really about to travel to another world? Cassie exhaled heavily and rolled her shoulders. It couldn’t possibly be worse than flying.

From her position, she strained to see what was going on. She could just see over Elizabeth’s shoulder, but she was too short to see past the soldier standing in front of Elizabeth. Something was going on. She could hear it, feel it. Energy arced and crackled in front of them as the technicians activated the Gateway Machine. Ahead of her, the Jump Tube now crackled with bolts of electricity, literally snapping in the air. She could smell the ozone burning. God, it’s hot here.
“Get ready,” Buck yelled from up front. “The field is almost strong enough.”

Clyde whined louder, agitated, rubbing so hard against Cassie she thought he might knock her out of line. Clara put her hands on the back of Cassie’s shoulders and told her to do the same to Elizabeth. All down the line, each soldier reached up and grabbed the shoulders of the person in front of them. When Elizabeth touched the shoulders of the soldier in front of her, Cassie saw she held her rosary beads in one hand. She had been praying.

At that moment, the tube flared up, illuminating the cavern in a rapturous blue glow. Just for a second, Cassie saw past the soldiers in front of her. The end of the tube showed the briefest glimmer of a dark jungle with stars shining down from a night sky—and two moons!

This is real. This is happening.

“Move, move, move!” yelled Buck as he ran forward into the Jump Tube. At the same time, all of the soldiers, like a single entity, surged forward. Alex, in the rear, made sure everyone was moving. Elizabeth, not hesitating at all, rushed forward with the others. Surprising herself, Cassie followed right along, glued to Elizabeth’s back. Clyde ran right beside her.

Oh shit, oh shit! This is way worse than flying.

Moments later, she was within the Jump Tube, feeling both exhilarated and terrified. The air throbbed with electrical current and mana—so much mana. Then she realized Elizabeth and the other soldiers in front of her were gone, and she was at the edge of the tube, an alien world opening up before her. Clyde leaped forward, jumping into the darkness, but Cassie hesitated, suddenly frozen with terror, unable to go through with it. Clara, her hands on Cassie’s shoulders, shoved her. Cassie tumbled forward.

Buy Starlight: Book 1 of the Dark Elf War On Amazon