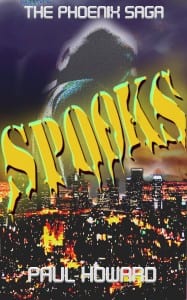 The Phoenix Corporation has a great offer for you; for the same cost as an average funeral, you can be ecto-infused and add years to your time. You won’t need to eat or sleep, you won’t feel pain, and you are impervious to injury. Phoenix calls them ecto-beings, on Earth people refer to them as Spooks.

The year is 2127. The Earth has been trashed, North America is buried under pack ice, and the entire American population is clinging to the only place left that isn’t hostile to human life; the West Coast of the continent. Los Angeles is now the largest city in the Western Hemisphere.

As if this didn’t create enough problems, an executed serial killer has gotten himself infused by Phoenix for seventy-five years, and has returned to wreak havoc and revenge on the city. The LAPD is now confronted by the toughest challenge it has ever faced: How do you stop a murderer you have already killed? The first book in Paul Howard’s “The Phoenix Saga”, “Spooks” is a savage tale of revenge, breakdown, and terror, where police find themselves at the mercy of unseen forces they cannot control.

How is Writing In Your Genre Different from Others?
I think the most unusual thing about my writing is the directness, or brevity of my prose. Not that I don’t enjoy good, literary prose, I do. But I personally have a style that is, as one author described it, austere. I like to cut to the chase and let my stories play in the mind’s eye of the reader. giving them as much direct visual interpretation as I can. In other words, my stage is in your head. I don’t to impress you, I want to entertain you.

What Advice Would You Give Aspiring Writers?
Believe in yourself and your writing. Never write anything that you would not enjoy reading for yourself. Give your characters as much free reign in your stories as you can. If they don’t surprise you during the course of your writing, they may not be alive enough to be involve your readers. Finally, hire an editor. I cannot stress this enough. If your book is good enough to be put in print, it is good enough to be perfected by an expert. Don’t expect a bestseller right out of the box. Publishing is hard, and not for the lazy. You will have to hard long, hard hours to make your work successful.

Author Bio:
I am an author, screenwriter and film maker, my screen credits include the cult classic “Night Terror” (1990) and the soon to be released “Hunt For the Desert Apeman” in collaboration with M.L. Behrman. I published his first novel: “The Galley”(2012) and its’ short story extract: “The Unthinkable (The Great Fire of Rome)”(2012). My newest books are “Timelines: The Beethoven Incident”(2013) and the first installment of “The Palindrome Chronicles”: the short story “We Were Here!(2013)” In September my newest book, “Spooks” will be published.

After spending my early years in the Midwest, I migrated to Southern California where I received most of my education. There is an old saying: “You can take the boy out of the farm, but you can’t take the farm out of the boy.” I think that’s true in my case. Although I’ve lived in L.A. most of my life, the simple ways of Southern Illinois are still close to my heart. I love the opportunities to get away to the quiet of the deserts and countryside. It helps me think. My joys in life are playing the guitar and spending time with my grandchildren, (as well as writing!).

What Inspired You to Write Your Book?
The idea for this book just came into my head for no apparent reason. It just struck me as an idea I thought would make a good book. All of my book ideas take a long time to develop, Spooks was no exception. The original idea came to me sometime around 1995. It was sketched numerous times. These sketches mean very little in the way I work. Once I finally decide to write, I just sit down and take it all from scratch. Spooks was undertaken as a novel in May of this year and completed in first draft by June. The editorial process took until the last week of September. The official publication date is October 6th, 2013.