You are here: Home / Fiction / Science Fiction / Sorry and Morticum by Charles Stoll 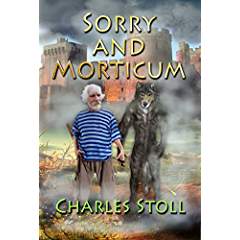 Welcome to Daytona, 3022. Much has changed.
After mankind had made peace between the nations, there still followed the Robotic Wars, the Insect Wars and the Climate Wars. Many of the world’s formally hidden creatures have risen to the surface.
The rivers and oceans have dried up and a conscious fog covers the planet.
Sorry has a plan to restore the world, but to do so, must cooperate with mutants, ocean sprites, Seafog, Freemonkeys and Mutmuts.
They’ve arrived from the future to show us how to save the present.

What Inspired You to Write Your Book?
Imagining how the city I live in would look in a thousand years. I knew mankind would not be the dominant species, so get ready to meet wizards, werewolves, Mutmuts, Sea sprites, Freemonkeys and giant cockroaches.

How Did You Come up With Your Characters?
I imagined creatures that were formally hidden but rose to the surface in a world that replaced its water with a conscious fog…creatures that lived deep in the ocean, lived in caves or remote areas, mutations, some from outer space and insects, also.