You are here: Home / Fiction / Solemn, A Novel by Kalisha Buckhanon 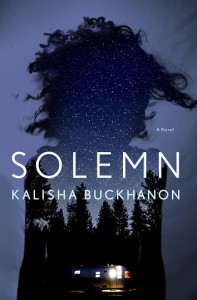 Solemn Redvine is a precocious Mississippi girl who senses a nearby baby may be her half-sibling: the outcome of her father’s mistakes with a married woman who lives in their trailer park. After Solemn witnesses a man throw the baby down a community well, she struggles to understand the event, leaving her forever changed.

As Solemn finds refuge in fantasies of stardom as well as friendships with her brother’s wife and a nearby girl, the ill-fated baby’s doomed mother disappears without a trace. Solemn remains trapped by connections to the missing other woman and an honest cop who suspects more to the story than others on the small local police force want to see. When her father’s next mistake – a robbery – lands Solemn in a group home for troubled girls, she meets a Chicago delinquent who wants to escape. There, Solemn must face the truth of who she really is and what she is really made of.

What Inspired You to Write Your Book?
This novel sprouted from a contractual obligation made by a former agent for me to to write a novel based on a short story I had written, about a woman living in Chicago who had come from Mississippi. I was blocked for several years when that woman and those characters were not speaking to me in any way, and I wrote little to nothing during those years. But in the meantime, a little girl in Mississippi kept knocking at my door, but I paid little attention because she did not fit the short story about grown women living in Chicago.
It was early 2012 when I realized I had no interest in her adult story. I wanted to know who she was as a child, and how she morphed into an adult searching for friends and belonging in Chicago as the original story portrayed her to be. So my current agent and I worked from there until a final draft in 2015. It was particularly poignant for me to think of because much of my family is from Mississippi, and the elders had gotten older. It was a perfect way to explore that part of my life and past, and honor where I come from.

How Did You Come up With Your Characters?
The characters kind of came up to me. At the time I was writing, I would retreat to a camping community right outside my hometown in Illinois. It’s on acres of land filled with woods, a well, a pond, campers, mobile homes, nature, and quieter quiet and darker dark than I’d ever experienced outside the South. In daytime it is peaceful heaven but at night I am very scared to go outside, because my imagination is a bit wild.
Starting with a young girl living in this environment, I created challenges, derailments and odd events transported mentally down South where my family had come from and I visited as a child. I knew I wanted most of the characters to have traditional families, as I was tired of writing about broken homes, so exterior relatives were probably the only characters who appeared out of conscious planning and wish.

Book Sample
Down the steep lived the few trailer park folks nobody ever saw out to barbecue, drink outside, drain their tanks, mow their lawns or pop fireworks on the Fourth. Bledsoe, Mississippi, summers could be spectacularly cruel or gloriously pleasurable. Those ones at that end stayed oblivious either way. Those ones either could not afford to or did not think to erect awnings, post tents, attach patios and decks. Those ones never strung Christmas lights—no snow to punctuate their parts, but still. They didn’t rear tulip trees for the honeybees to flirt with. Those ones didn’t bother to scrub campers to a higher value in their eyes. They kept it spare. All of them, however, peeked out the curtains and saw the treasure, not the trash.
Gilroy and Pearletta Hassle were among the ones who stayed in. Solemn looked for Pearletta—from time to time. She sensed remembrance of a time her father had given the woman, barefoot, a ride home. Solemn remembered the way their car had gone, the direction the woman’s trailer pointed. In her mind, she was a spy. She checked on the woman often. But when she snuck out in dark to go find that woman’s trailer, down the steep and past the well, the all-around trees with their shadows sent her home quick.
Solemn saw Pearletta was very round at a summer’s Solstice, but back slim by the following start to school. Solemn had seen plenty of pregnant ladies, but none with crow’s feet and gray roots. Pearletta was worn. Any new mothers Solemn saw were all fresh from prom formals and yearbook photos. And other pregnant ladies gave parties. They bought home soft, colorful bags. Whether she was round or not, Solemn only saw brown grocery bags and black plastic sacks in Pearletta’s hands. She and the man in her trailer kept the blinds closed all the time—even in the day. The couple gave no shower or announcement or viewing invitations or birthday party for the baby. No one even knew if it was a boy or a girl. No one saw it until a Star-Herald obituary announced it was gone.
But let’s not skip ahead.
Solemn was close to her again, once. Pearletta hung clothes on the line until the end of the pregnancy. Pearletta thought to pass Solemn her line for a jumprope. But when Solemn thought the woman saw her through fluttering sheets, she ran away. Pearletta did see Solemn. And again. More even. Once, she bumped into Solemn on one of the walks she took to manage her hips. The woman smiled at the girl she called ‘pretty.’ She didn’t stop to talk. After the baby came, the man started to drive Pearletta to a town laundromat. Solemn wanted to come back and watch the sheets blow, know the woman saw her, trot away, play it. Before dark, Solemn could hear the baby cry from the trailer windows. She sat on the well to listen until it got too dark. She thought to ask Pearletta to babysit the baby, to hold the child and stare into its eyes. But Solemn was young. And Pearletta had never shaken hands with her mother. It was inappropriate to ask without that.