You are here: Home / Bargains and Freebies / Bargain Books Under $3 / So What! Stories or Whatever! by G J Griffiths @gjgfh_g

So What! Stories or Whatever! is a collection of stories about the people who are found in a contemporary High School in England; tales that will make the reader laugh, cry, think deeply or differently, and maybe even be inspired or impressed. It generally follows the early and subsequent career of Robert Jeffrey, as he attempts to prove to himself that he can motivate the children he teaches to want to learn about Science – and maybe become scientists one day. All through the book we are made aware of the joys and disappointments experienced by pupils and their teachers.

The book tends to concentrate in the latter part on an unpleasant boy Kyle, who is a bully, and his effect on two other boys, Adam and Nigel Shantra. Unknown to Mr Jeffrey he also affects the way his teaching job changes at the exact time that Robert really feels he has become a “good teacher”. The three paths of Nigel, Kyle and Robert Jeffrey converge several years later, in the concluding chapters, to provide an unexpected twist to the tale.

Waterloo Road or Grange Hill meets Gervase Phinn? – well, maybe! Whether you love this book or hate it you will discover that the stories about its individuals will stay in your memory for a long time. With over twenty years teaching experience behind him, G J Griffiths has brought to the reader some of the stories about the children he taught, in this amusing and often poignant book. Parents, teachers, pupils and students will all recognise the characters and their tales. With the ever-present controversy about changing the education system this is a timely illustration of what is to be found in the classrooms of the contemporary High School.

BLURB & REVIEW DETAILS: So What! Stories or Whatever! is the book that lifts the roof to reveal the stories about the characters that are inside the contemporary High School, whether bully or victim, geek or star, Alien or their struggling teachers. If you’ve ever been to school you’ll surely recognise the characters and their tales, but, if you’ve never been to school you must read this book as a rough guide to survival!

The novel continues to attract 5 star reviews on both Amazon USA and UK! See a selection on G J Griffiths’s website – http://gjgriffithswriter.weebly.com/reviews-of-my-books.html 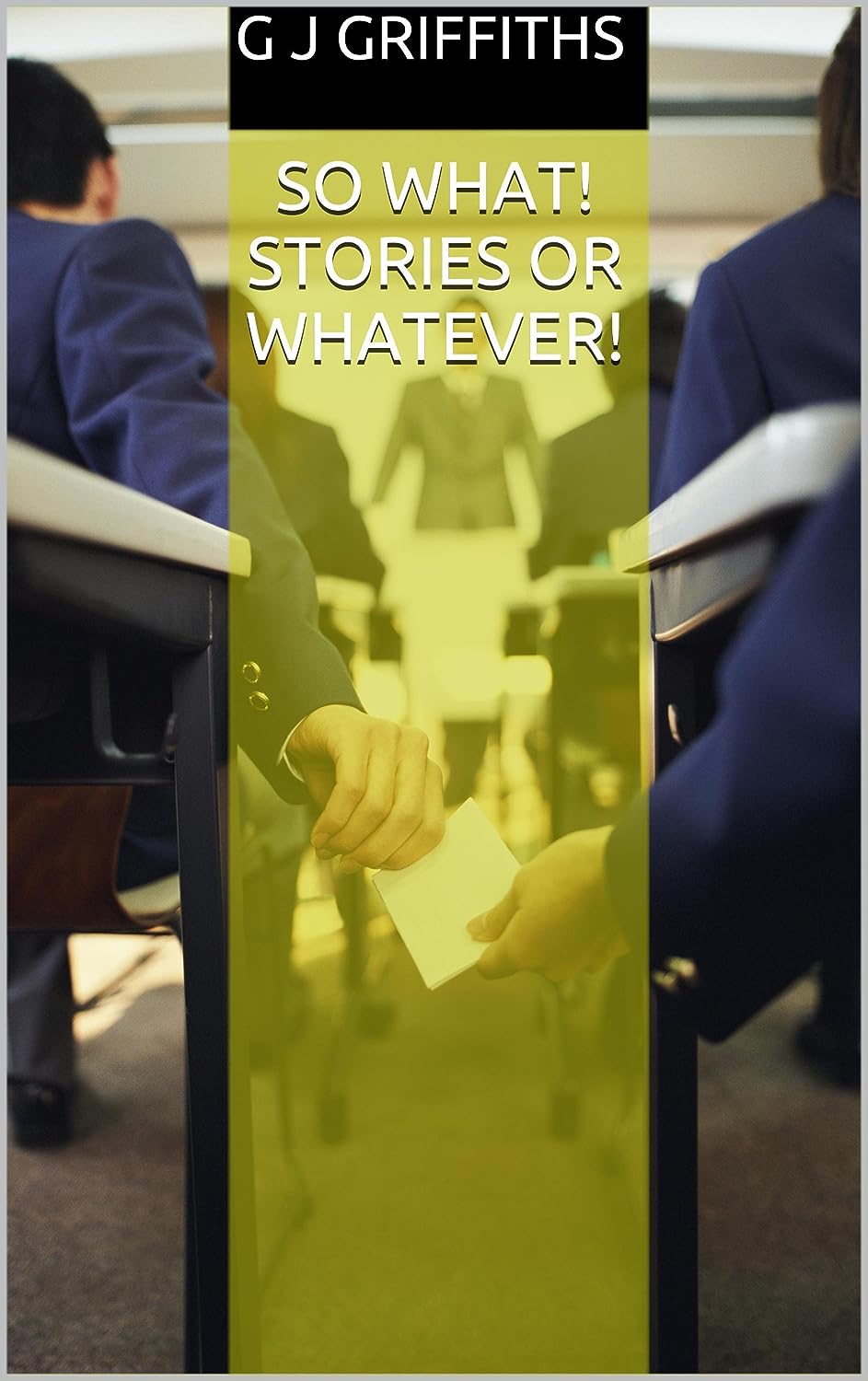 How is Writing In Your Genre Different from Others?
HOW IS WRITING IN THIS GENRE DIFFERENT? The narrative in this kind of contemporary fiction often oscillates between the mundane, day to day events in a school, and surprising, amusing, or even shocking incidents – sometimes all three! While it is possible to include a steady building of the suspense found in a thriller or horror novel, it is not something that the reader always expects.

What I try to do is include as much humour, tragedy and poignancy as the story and the characters will allow; always remembering to remain faithful to the realistic direction of the general plot-line. That is not to say I won’t put in a surprise “Ambush Twist” somewhere in the story in order to keep the reader on their toes!

What Advice Would You Give Aspiring Writers?
MY ADVICE TO ASPIRING WRITERS: Make sure that you read lots of other authors’ books, not necessarily in the genre in which you write. You can often be inspired by other topics or styles that way but always be aware not to copy another author’s way of telling a story. It’s important to find your own “voice” for the tale you have to tell. Keep on writing something every day if possible, even if it seems like rubbish or feels unsatisfactory – you can always brush it up ie. edit it later, a useful exercise in itself.

Author Bio:
G J Griffiths is a UK baby-boomer who worked for quite a while in the Photographic industry. Then he became a Science teacher for about twenty years. He likes reading (lots!) walking in the countryside and birdwatching – Oh! and being a Grandad! Having retired he thought he would like to write a novel. The third book, So What’s Next! is nearing completion and should be published later in 2014.

What Inspired You to Write Your Book?
Originally, after he had retired from teaching GJ just wanted to write and write about many of the kids he had taught and tell his readers about some of their hilarious tales. But after a while he realised that so many of the stories would be tinged with sadness or tragedy or poignant moments, and that it was not going to be just another “book of funny stories”. If he was going to include some of the difficulties that the kids’ teachers also faced, many times a day sometimes, then he had to also write about why they wanted to come into education, and more importantly, why they were determined to stay in it!

So Robert Jeffrey was “born” and his story is gradually unfolded and woven between the collection of students’ stories. Robert’s determination to become what he feels is a “good teacher” became a main theme throughout the book. There was a danger then that the book would become a continuous whinge from yet another cynical, grumbling teacher. Enter Kyle Crabbe, the bully, and some of the tales begin to have a sinister theme to them! With that stage set it meant that G J could lead the reader up a path that would allow a twist to it! Be surprised – be very surprised!

Website(s)
Author Home Page Link
Link To Buy So What! Stories or Whatever!