You are here: Home / Fiction / Mystery/Suspense / So Damn Beautiful: The Lonely One by A.E. Hodge 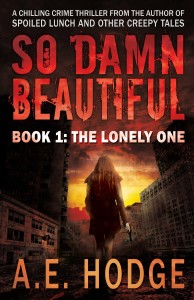 On the night before her son disappears, single mother Meredith gets an unwelcome visitor to her row house in Detroit. Ever since the drunken fling they shared two weeks ago, Christian Morgan—the hypnotically attractive intern from Meredith’s office—can’t seem to stay away from her. Meredith insists it was a one-night stand, thinking Christian’s just a love-struck kid.

But Christian has much bigger plans, and he won’t take no for an answer. He’ll stop at nothing to get what he wants, and what he wants is Meredith—from her body to her soul.

So when Meredith’s son Troy goes missing after school, she’s certain Christian is behind it; but the cops can’t help her without evidence. To find her son and his deranged kidnapper, Meredith sets out alone into the underbelly of Detroit, a surreal nightmare of crime, murder, and worse. The further she steps outside the law and into Christian’s deadly world, the less hope she has of turning back. Now her vigilante quest can only end in two ways: either she tracks down Christian, brings him to justice, and saves her lost son—or she winds up pushing daisies in an unmarked grave.

What Inspired You to Write Your Book?
I was inspired to write the So Damn Beautiful series by the simple question: what happens when you fall in love with a serial killer? You know it’s wrong, you know something doesn’t feel quite right, yet you can’t help it–he’s just so damn beautiful!

This is a gritty, action-packed, hardcore horror-thriller, but at its core, it’s a story about beauty. Beauty can be a coveted treasure or a fatal temptation, a deadly weapon for manipulation, a weakness to be exploited, or a mask to hide the worst of intentions. So Damn Beautiful is an exploration of those themes in the form of a chilling game of seduction and pursuit between a hypnotically handsome serial killer and his prey, set against a backdrop of human trafficking, prostitution, child abuse and corruption.

How Did You Come up With Your Characters?
The characters flowed naturally out of the themes of So Damn Beautiful. Both the protagonist Meredith Banks and the villain Christian Morgan are devastatingly beautiful. Both utilize their charms to manipulate those around them, and their beauty is their primary weapon.

Meredith is a mother, first and foremost, and will do anything to find her son. Naturally, she became a very strong, driven women, who grew stronger and stronger with each book in the trilogy. As her beauty is stripped and beaten away with each trial in her vigilante quest, she’s forced to rely more and more on wits, grit, and sheer strength of will to survive.

Christian Morgan is a charismatic psychopath and the most beautiful man Meredith has ever seen. A natural hypnotist, Christian is able to seduce and brainwash almost anyone to love him and do his bidding. I modeled him after Charles Manson and Ted Bundy, with a dash of Hannibal Lecter.

Book Sample
Across the barrel of the gun he looks at me almost shyly, wearing a small smile. His long hair parts neatly down the center. His hand is hidden in one of the pockets of his black leather jacket.

“Don’t move, motherfucker,” I growl. My back is pressed to the car door and the gun is only inches from his face.

Christian sighs slowly. “Good seeing you again, too. You look like hell. What did they do to you?”

He starts to reach toward me, as if to touch my face. I press the tip of the gun to his forehead to shove him back. “Put your hands up, slowly,” I say. He doesn’t move. “Get your hand out of your pocket! Now!”

His smile is almost sad. “You think I want to hurt you? I don’t want any of this. All I want is to love you.”

“I’ll shoot you, Christian,” I whisper.

“I believe you would,” he whispers back. “But you know what’s funny? I feel closer to you now than ever before. After watching you, seeing how you coped. You’re such a good mother. And you’re just like me! Driven by a primal urge, some evolutionary compulsion. Even willing to kill to get what you want.”

This is like a knife to my belly. Willing to kill? What does he mean by that? I start to sweat in worry for my son. “It was an accident,” I say, shakily. “I didn’t mean to kill them.”

“Shh, it’s okay. I like that you did it. It shows what a good mother you are. You’ll stop at nothing to find Troy. Isn’t that right?”

“Yes. That’s right.” The gun trembles in my hand.

I stare at him, not comprehending. His smile never wavers. He turns slightly, raises his free hand very slowly, and points a finger at his own forehead. I let him do this, too surprised to react.

“Do it,” he says again, in his eerily calm voice. “Shoot me.” His smile widens almost imperceptibly. “And never see your son again.”

About the Author:
A.E. Hodge is a new voice in horror, fantasy, and other fiction. He is the author of “Spoiled Lunch and Other Creepy Tales” and the creator of the Fiction Fugitive blog. Hodge is a graduate of the University of Maryland, Baltimore County, and currently resides outside Baltimore. Follow him on Facebook (A.E. Hodge) and Twitter (@FictionFugitive).

Links to Purchase eBooks
Link To Buy So Damn Beautiful: The Lonely One On Amazon