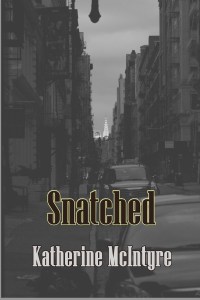 When Kara was ten, the shifters took her parents.

A year ago, they took her best friend Hunter.

And now, the night before her first military strike against those monsters on the surface, the shifters take the only person she has left: her little sister Lizzy.

The snatched don’t come back. That’s what Kara’s believed her entire life, but the first person she finds above ground is the best friend she thought lost forever. Turns out, the higher ups lied. Other colonies are out there, hell even folks who toughed it up above. If anyone knows how to get her sister back, these people would. However, unless she can rally these surfacers into an army, one girl with a shotgun won’t survive long against the very creatures that overturned her world.

What Inspired You to Write Your Book?
Weirdly enough, what triggered the concept for this book was mulling over herbalism and what if the world had to return to that mode for medicine. From there, the shifters were born–genetic mutations caused by man’s dependency on chemical meds. That same dependency becomes their downfall, as the shifters are born with snapped limbic systems and the ability to teleport. I researched a bunch of different mutations beforehand and just expanded on them. Hence why Kara’s society was forced underground, and why they rely on herbalism for medicine–they don’t trust the old stuff.

How Did You Come up With Your Characters?
Kara was an easy character for me since I’m an older sister. I wanted to write a really tough military chick in young adult fiction, so that’s what her character became, even though she ended up having a lot more going on underneath the surface. Dinah’s character was built to be her foil–the complete opposite of her, and a total girly girl. But by the end of the story, I have to say, Dinah’s character shows the most growth out of any of them. Hunter and Jared are opposites too. Hunter represents rebelliousness and adventure, while Jared stands for discipline and order.

Book Sample
After I spent a week up on scouting patrol, drinking in that crisp surface air, the stale underground I grew up in would never be the same. Jagged buildings spread out in every direction outside as I grasped the window ledge. Beetles scurried along the splintered floorboards of the tenement-turned-guard post, and one of the buggers skittered nearby, clicking as it burrowed into a crack in the plaster.

The air I sucked down was bittersweet, like dried fennel. Being up there filled my head with crazy ideas, like skipping duty to explore the decimated city—which would make Lizzy jealous as anything. Maybe we could even find others who had survived the Rift. The fresh breeze must’ve addled my mind. No one approached our entrance down in Subterra, and no folks chanced the surface for long while the shifters roamed. My chest tightened at the thought. Those beasts wouldn’t hesitate to rip us apart.

A click sounded, meaning my dimensional restraint had finished recharging. I slapped the blood-red orb to turn it on again. The brass bracer weighed heavily on my wrist, but was worth the annoyance. When the restraint was on, it emitted a force field that disrupted the ability to teleport, supposedly giving us enough time to run from those monsters. Problem was, though, against mutants who can transport through space? Running falls short.

A dry scrape echoed behind me. I froze.

Slowly, I turned my head in the direction of the noise. The rustling stopped, but seconds later, it picked up again. Rats peered out at me from the vantage point of a loose overhead tile, their eyes glistening against the dark. My hand moved away from my gun and I exhaled, letting my shoulders relax. After I crept through the doorway and into the hall, I gave my makeshift home a final glance, surprised at the slight pang of sadness. Already missing the constant danger? Some light bulb must’ve shattered in my brain.

My head lifted upon exit, instincts sharp. Dim illumination, courtesy of shadow electricity, flickered on and off down the hallway. Metal creaked from the end of the corridor, and I prayed it was another rat. A sticky cobweb tickled the side of my cheek and tangled in my ponytail. I swatted it away, wrinkling my nose at how badly I needed a scrubdown. When I approached the slate door at the end of the hall, I rapped three staccato knocks on the peeling wood.

Jared opened up. His matted blond hair clung to his neck from stale sweat. Even after a week of patrol together, those messy strands angled down as if styled to frame his wide jaw. He’d already armored up, probably faster than me, too. The boy was a super soldier, pride and joy of our class.

“Time to head home.” I forced a grin, even though my nerves were scraped raw.

Jared slung his pack over his shoulder. “I’ve been ready to leave since we started patrol,” he said, gripping the doorframe. “Not all of us acclimate to harsh, quiet environments like you, Kara. I can’t wait to be under a force field again, and not having to twitch at every noise.” He flashed me one of those brief, secretive smiles that made all the girls back home swoon. Good thing I wasn’t your average girl. The guy was sweet, but I had no time for nonsense like losing my edge over some guy.

I rested my hand on my hip. “Consider it an exercise in alertness.”

Jared snorted and shook his head. The trek back had to be quick and quiet, so I gestured forward and took the lead. An aluminum stairwell spanned out before us. My combat boots thudded against the tinny flats, despite my attempt to soften my tread. Red and orange flakes from the rail trickled off under my grip.

Past the door and across the street lay the entrance to the tunnels. The purplish hues of night distorted the span of fifteen feet between the tenement and our destination, the underground. Fifteen feet away from a hot meal and home, where Lizzy would be waiting for me.

A yellowed moon shone overhead and cast a hollow parody of sunlight onto the earth. The wispy rays glinted off several old metal signs, the words eaten away by rust. In the darkness, shadows distorted the broken windows of old shop fronts, and the sky-high tenements glared down like angry sentinels. A sullied green “S” stood out on a graying backdrop that made for a road marker up there. We called it the wasteland.

I glanced back at Jared, whose skin had darkened to a deep olive in the dim light. When I looked back, my muscles tensed. Jared’s breath came out in a low hiss.

A humanoid form wandered the streets, larger than average and packed with muscle. It hunched over and teleported along, like a rock skipping across the surface of a cave pool. With skin so pale and translucent, all of its veins bulged from underneath, creating blue trails throughout its body like fissures. A ragged band of cloth adorned its torso and trailed over the corded muscle of its stomach and jutted hip bones.

Mom used to tell us stories of these bogeymen when we were kids, and Lizzy would crawl into my bed so she could fall asleep. Stories of the monsters who forced us underground, and when the force field faltered, would snatch us from our homes. Fear slithered across my shoulders and down my arms like stray roaches. Shifters. The beasts who took my folks away, leaving Mom’s bowlful of incense scattered on the floor and the sharp scent of camphor in their wake. I choked the stale breeze down my already-dried throat. The shifter’s slate eyes scanned the pavement, and it groped forward, searching through the wreckage of Old New York.

I stepped in front of Jared with my hand on my pistol. If we made a sound or drew its attention, the Great Spirit itself couldn’t save us. I barely dared to breathe. One hint of our location and it’d port in a heartbeat. Tear us limb from limb. Maybe eat us. These were the monsters responsible for the Rift. The ones who bombed every government of every country, sending the world into chaos and the remnants underground.

Beads of sweat trickled down my neck. It crawled closer, hovering over the rubble that cluttered the city street as it blinked with those blank gray slates for pupils. Their severed limbic system meant no tears, no anger, no happiness…just dead inside. The ragged gray fabric it wore blended into its translucent skin. Blue veins pulsed as the creature glided with a preternatural grace, like water down a rock face. Its head flicked back and forth, but those slate eyes didn’t move in the slightest.

It reached down with long, spiderlike arms to scoop up a crumpled can, then a large rock. After examination, it shook its head and dropped each item. What was it looking for?

About the Author:
Katherine McIntyre is the author of a variety of poems, short stories, novellas and novels—truly, anything as long as it involves her primary passion: writing. Her steampunk adventure novel, An Airship Named Desire, was published in 2012 by Hazardous Press. Since then, she has two up and coming novellas, By the Sea, and, Poisoned Apple, picked up by Decadent Publishing. The next novel on the horizon is her young adult science fiction, Snatched, which will be published with Jupiter Gardens Press within the year. For more casual writing, she’s a regular contributor on CaffeineCrew.com, a geek news website. With more imagination than she knows what to do with, writing proved to be the best outlet.