You are here: Home / Fiction / Mystery/Suspense / Slow Curve on the Coquihalla by R.E. Donald 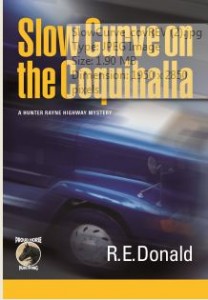 When a well respected truck driver, the owner of a family trucking business, is found dead in his truck down a steep embankment along the Coquihalla highway that winds through the mountains in British Columbia, his distraught daughter wants to know how and why he died. Not long afterwards, while driving the same highway, her husband’s brakes are tampered with, almost creating another fatal accident on a treacherous incline, This compels Hunter Rayne, a fellow trucker and retired RCMP detective, to help her find answers.

As he uncovers signs of illegal cross border activity originating in a Seattle warehouse, Hunter recruits an old friend, an outlaw biker, to infiltrate what appears to be an international smuggling ring. But while Hunter follows up clues and waits for critical information from his old friend, the wily biker starts to play his own angles.

Finally, putting all the pieces together, there in the dark on the same uphill curve on the Coquihalla highway, Hunter risks it all to confront the murderer.

Slow Curve on the Coquihalla is the first in a traditional mystery series featuring “semi-” professional sleuth, Hunter Rayne. After serving over 20 years in the Royal Canadian Mounted Police and becoming a skilled detective, Hunter resigned from the force and took to the road as a long haul trucker. His ex-wife is convinced he is running away from the personal tragedy that made him leave a job he loved. Hunter himself doesn’t know why, he only knows he has to keep following the white lines.

What Inspired You to Write Your Book?
I’ve been a fan of the traditional mystery (or whodunit) for as long as I can remember. When it came time to develop a mystery series of my own, I wanted the series to be original and unique, and set in a world I knew well. I had worked in the transportation industry for many years, plus my husband at the time had begun his career as a truck driver and had also done a little undercover work for the RCMP. What better choice for a protagonist than Hunter Rayne, a former RCMP homicide investigator who had left the police force to become a long haul trucker? I’ve been known to call him my “semi-professional sleuth”.

How Did You Come up With Your Characters?
The main characters are the people my hero knows through his job, either currently as a trucker or at sometime in his law enforcement past. As a truck driver, he needs a dispatcher. Enter Elspeth Watson, aka Big Mother Trucker. She owns and operates a freight company using owner/operators like our hero, Hunter Rayne. She’s big, she’s tough, and she likes having a former detective in her truck fleet. Hunter sometimes has a co-driver on the road. Dan “Sorry” Sorenson is a biker, once arrested by Hunter and now his friend and occasional sidekick. Sorry likes to party and has trouble with impulse control, and struggles with being a good husband and father.

Hunter has two daughters from his failed marriage, a kindly landlord, and numerous old friends and contacts from his years in the RCMP who often play a role in his investigative adventures.

Book Sample
Funny how the last hundred miles always seem like the longest part of a trip home. The nose of Hunter Rayne’s big Freightliner pointed west, into the sunset. He had just come out of the mountains southwest of Hope and was travelling the straight, flat stretch of Highway 1 that runs through Sumas Prairie in the lower Fraser Valley. Somewhere between him and the horizon, beneath the scalloped rows of gilt edged clouds, the port city of Vancouver mushroomed along the shores of Burrard Inlet, her sharp edged buildings sprouted against the looming shadows of the Coast mountains.

Hunter was on the last lap of a four thousand mile trip. He’d hauled a load of baby cribs from Vancouver to L.A., a refrigerated load of cucumbers and tomatoes from L.A. to Edmonton, and now he was returning home with a refrigerated load of Alberta beef. He was impatient to close his own front door behind him so he could exchange the road weary jeans and wrinkled blue shirt, the cleanest he had left after two weeks on the road, for some loose soft sweats. All he wanted to do tonight was to take a long soapy shower, then put up his feet and suck on a beer, maybe do a little channel surfing before he fell asleep at the helm of his remote control.

As he slowed his rig behind a dusty motor home with California plates, boxed in by a Trailways bus and half a dozen cars tailgating each other in the passing lane, Hunter flipped open his cellular phone and punched the ‘1’ to call his dispatcher. Hunter was an owner operator under contract to Watson Transportation, a load broker and freight forwarder in the Lower Mainland of B.C., run by a former driver named Elspeth Watson.

“Watson!” El answered impatiently, as she usually did.

“Yo, El!” He raised his voice towards a small microphone mounted above the windshield. “The Blue Knight’s just your side of Aldergrove. Where do you want me to drop the beef?”

“The yard, Hunter,” El said. There was a brittle edge to her voice, and she hung up before he could acknowledge. Must have caught her at a bad time.

Less than an hour later, Hunter wheeled into an industrial park on Annacis Island, braked the big Freightliner to an easy stop behind a gray cinderblock building, and left his truck idling to cool the engine down. He hadn’t expected El to still be there, but the dispatcher’s Chevy pickup was parked beside the door to Watson Transportation’s office. The building was dark.

With a crooked frown, he climbed the few steps to the office and tried the door. It was unlocked, and he could hear nothing save a brief spit and crackle from the CB radio inside. His chronic suspicion, occupational disease of police officers and former police officers everywhere, told him that something was wrong. He eased open the door and entered the office, planting his steel toed sneakers with care until he could see around the front counter into the alcove where the dispatcher’s desk was located.

Elspeth Watson was slumped forward in her big captain’s chair, her elbows resting on heavy thighs, forehead cradled in her hands. Her broad, rounded back ballooned and deflated with big, slow breaths.

Hunter backed quietly to the other side of the counter and cleared his throat. El raised her head and looked at him blankly, her skin blotched with red, the bangs of her brown hair flopping limply over her forehead like the comb of a rooster.

He offered her a tentative smile, which she didn’t return. Instead, she dropped her gaze to the frayed armrest of her chair, and began to pick at the dirty foam rubber that bulged out of a tear in the black vinyl. Her fingers looked swollen, and were smudged with ink and carbon. Hunter could hear the soft whirr of El’s computer and muted traffic noises from the street.

Without looking up, she said, “Randy Danyluk’s dead,” and closed her eyes.