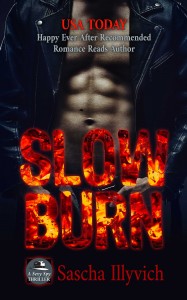 Tempting secrets of an angel
Seductive mysteries of the beast

Derrick, a former spy, has been asked to protect the sultry Sonja, a death metal singer whose magical voice grabs him by the balls and won’t let go. He’ll protect her, all right…with every part of his body tight against hers.

Sonja uses her voice to purge her fans of their darkness, their hate and hopelessness. But evil forces want to use her magic for their own ends. All she wants, at this point, is safety for herself and her band.

When Derrick and Sonja team up, Sonja does her best to resist the lure of safety he represents, until a radical league that wants her dead propels her into his arms. Will his help be enough? Or will she lose her heart to him, only to be killed in the process of saving the world?

What Inspired You to Write Your Book?
I have a fascination with the shifter community and am a diehard Burn Notice fan. I had been watching the series with my ex when it was new and got to thinking about the characters and that whole “what if” game writers tend to play. I thought Michael Westen was a great character with plenty of complexity, but I needed to pull something from my own knowledge base into the novel, hence the death metal singing witch.

How Did You Come up With Your Characters?
I pulled parts of Michael Westen from Burn Notice into Derrick, and combined him with a buddy of mine who makes high end luxury cigars. Then I started letting him tell the story. It turns out, he was nothing like iether one of them.