You are here: Home / Children and Young Adult Books / Sleeping with the Blackbirds by Alex Pearl 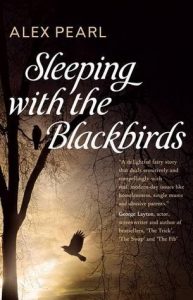 Eleven-year-old schoolboy, Roy Nuttersley has been dealt a pretty raw deal. while hideous parents show him precious little in the way of love and affection, school bullies make his life a misery. So Roy takes comfort in looking after the birds in his garden, and in return the birds hatch a series of ambitious schemes to protect their new friend. As with the best-laid plans, however, these get blown completely off course – and as a result the lives of both Roy and his arch tormentor, Harry Hodges are turned upside down – but in a surprisingly good way.

What Inspired You to Write Your Book?
I wanted to demonstrate to my own kids that not all children in this world have it so easy as they do. But I also wanted to show them that we are all shaped by our environment and upbringing. So that's why I created Roy and Harry, both of whom have had to learn the hard way. I was inspired by writers like Clive King who wrote 'Stig of the Dump', which I loved as a child. You may also detect touches of Roald Dahl and Sue Townsend's Adrian Mole in my story. These are writers I have grown up with, and hugely admire.

How Did You Come up With Your Characters?
My characters are all based on people or combinations of people I have known, or people in the public eye, but obviously with different names. In fact, the old gardener who makes a brief appearance in Roy's own story is based entirely on a real gardener my parents used to employ, and he too was an ARP man during the war. And Max Clivedon the PR guru is deliberately based on the real Max Clifford.

Buy Sleeping with the Blackbirds On Amazon