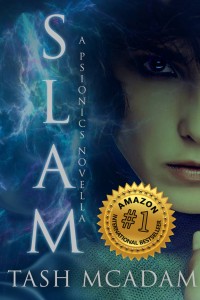 Telepaths, torture, mindwipes … the Institute has it all, and they use each of their brainwashed children as weapons, the way they see fit. To control society, repress its people. To make certain that they stay in power, no matter the cost. Serena’s baby brother Damon is one of those children, and these days he’s so altered that he doesn’t even recognize her.

When it comes to getting Damon away from those who kidnapped him, there’s nothing Serena won’t do. Even if she has to kill him to save him. First, though, she must prove to her father that she has what it takes to be a soldier against the insidious threat of the Institute. Her first mission has to be perfect.

But with inaccurate intelligence, unexpected storms, and Gav Belias, people’s hero of the Watch, on the prowl, will she even survive? If she doesn’t succeed, they’ll never let her go after her brother.

And that would be unthinkable, when it was her fault that he was taken in the first place.

What Inspired You to Write Your Book?
This book is a prequel to my upcoming series, The Psionics. When my publisher approached me to write a novella for a charity program she was heading up, I knew exactly the story I wanted to tell. Serena, the protagonist of SLAM, is one of the main characters in Maelstrom (Psionics 1), at this time she is a competent soldier for the resistance, one of their most powerful and trusted agents. But it wasn’t always that way. Until the Institute broke into the rebel base and stole her younger brother, Serena didn’t really take the rebellion too seriously. After Damon was stolen, however, her sole focus was on getting him out of their clutches, even if she has to kill him to save him. SLAM follows Serena on her testing process to qualify and on her first mission, an attempt to prove she has what it takes to become a fully trained telekinetic weapon for ARC, the Anti Reprogramming Collective and the one thing that stands between the Institute and total, telepathic control of the population. I wanted to tell that story, to explore Serena in more depth and give readers that insight into her background.

How Did You Come up With Your Characters?
They leap into my head fully formed. I never feel as though I create characters, more… find them. They’re combinations of aspects of me, people I know, friends and family and even celebrities. Their personalities and quirks seem to come naturally, as though I know them, but they still surprise me!

Book Sample
All the water and lack of visual information is so disorientating that Serena’s taken completely by surprise when a Watch patrol almost runs into them at the crossroads. Her throat freezes, mouth dropping open. Nuke, we’ve got to get off the road. What do we do? So much for being trained soldiers. Her radar was so jammed that she didn’t even know they were coming. But the patrol doesn’t even hesitate, just runs right past them as they dither in the street. She clears her throat, embarrassed and pathetically grateful that the soldiers were distracted enough by whatever it is they’re hunting to stamp right past. Abial looks like she feels about the same way, awkwardly looking down the street as she asks, “Well, we’ll probably see them again in a minute. Is there a different route we can take, Leaf?” There’s no answer, and Serena glances around, her breath catching. He’s nowhere in sight. “Leaf?” Abial repeats her call a little louder, worry colouring her tone, and he melts out of the gloom in front of them, looking sheepish. Serena releases the breath that had been caught in her throat, strangling her, and tries to quash the panic that had threatened to swamp her.

“Yep. Sorry. Automatic response.” He points at the retreating Watch patrol. “Soldiers make me hide.” He grins lopsidedly and she goes to pat him on the shoulder, surprised by how relieved she is that he’s back. He shifts sideways, avoiding the contact, though, and she drops her hand after a moment and purses her lips, making a mental note that he apparently doesn’t like to be touched. Interesting.

“Yeah, alright. Not a fighter, we got it. Anyway, alternate route?” Her tone is gruffer than she means it to be.

“Hold it!” An authoritative voice suddenly calls from close behind them, and startled, they spin around. Shit, another soldier. Just when she thought they’d gotten away. Worse, there might be more, and they can’t afford to draw attention to themselves. She processes several things at once. Leaf is gone again, as though by magic. There’s no sign of him, though it seems impossible that they wouldn’t have at least heard him splash away. Abial is poised with her hands up, ready to fight. That’s not the reaction of an innocent civilian, and Serena curses internally. Then something else registers. The soldier who’s standing only a couple of metres away from them is, somehow, Gav Belias. He has his zap up and pointing at them. She can barely see him in the torrential downpour, but the way he holds his body is unmistakable after the time she spent looking/not looking at him on the tube. Oh, nuke. We’re screwed. Does he have back up? She squints through the rain, torn between action and inaction. She could put him down now, hard, but if he’s got a team with him and someone radios off that there’re telekinetics in town, the Institute will be on them in minutes. Her mind runs through possibilities, even as she watches him, waiting for a movement, hoping for something to change. It feels like inertia has settled into her muscles, freezing her usually lightning-quick reactions. Fear has its fist around her spine, and she can’t force herself to move.

“What are you doing? All Citizens were cleared from this area. Never mind. Put your hands up, you can answer some questions at the Watchhouse.” His tone is firm, hands steady, and now another soldier is blurrily visible through the rain behind him. Feeling Abial questing out with her power shocks her into doing the same, and she wafts out mental feelers, looking for information and preparing to attack or defend. She knows the soldiers will have zaps. If they get shot from this close, even with the shockvests, their insides will be minced. Thankfully, her scan lets her know that there’re only the two of them in immediate range. Not a full patrol. Either they’re catching up or scouting ahead. If she and Abial can take them down simultaneously, they might not get a chance to warn the rest of their pack. Then more information comes to her: The second man doesn’t have any Talent worth mentioning, but Gav Belias, hero of the City Watch, flinches slightly at her mental touch, implying that he has some reading ability, at least. He’s almost certainly not a telekinetic – he wouldn’t be in the Watch if he was – but if he can read, even at a low level, that might account for some of his brilliant tactical decisions and incredible reaction speed. It’s not hard to react fast when you know something is going to happen before it does … She catches his intention to shoot and reacts automatically; thrusting her hand out in a psionic attack at the same moment he fires his zap. The energy blast from the gun smashes into her surge of power. The noise crashes into her eardrums at the same time the punch of the weapon hits her in the sternum, but her telekinetic push outward, combined with the shock armour, do their jobs. She’s not knocked over, anyway, and there’s no time to catalogue her injuries now. She sends her power toward him and twists his arm up before he realizes what’s happening, freezing his finger on the trigger so he can’t fire again. Even if he doesn’t hit her, the sound will bring others. Out of the corner of her eye she sees Abial physically grappling with the second soldier, and in that moment of distraction Gav Belias pulls a knife with his left hand. Idiot! she screams at herself. Immobilization should have been her first call, but she was flustered and winded, and only grabbed his gun hand. Now he throws so fast that it looks like chain lightening, the knife flying suddenly through the air, and she can’t move quickly enough. She throws more power out, desperate, but it’s too slow, and her telekinetic block misses the spinning blade.