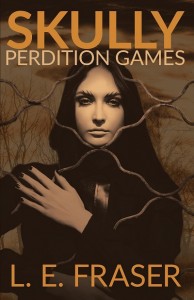 She can’t run fast enough to escape her past.

Authorities find five-year-old Gabriella LeBlanc walking on the ice of Lake Superior six months after an unspeakable crime. Michigan police discover a dead man in a wilderness cabin, but the child has no memory of her abduction or captivity.

Thirty years later, Gabriella disappears from her home after calling 911, and Toronto PI Samantha McNamara and ex-OPP Inspector Reece Hash must unravel the shocking truth behind the woman’s haunted life before a jury convicts her husband of a brutal murder.

But the web of lies Sam is weaving around her past begins to disintegrate when their investigation reveals hidden ties her father had to the murdered woman’s childhood. As Reece’s suspicions mount, Sam struggles to guard her secrets and uncover Gabriella’s disturbing history before time runs out.

A dark thriller with twists that keep readers turning the pages.

What Inspired You to Write Your Book?
Highlander myths have always fascinated me, as do the stories we hear about mothers and their psychic links to their kids. Me? I always know when something’s wrong with one of my sons. I have this strange yet compelling urge to talk to them.
As parents, child abduction is a fear we share. But how often have we imagined what life would look like after we recovered our child. How would our family deal with the crisis? What would our child be like if tragedy followed her into adulthood? Maybe a lot like Gabriella LeBlanc-Martina.

How Did You Come up With Your Characters?
Sam McNamara owes her existence to a conversation I had with my paternal grandmother shortly before her death. We were discussing how I wanted to be a writer, and she told me the qualities she’d like in a female protagonist. I was fourteen and glimpsed hidden depths to my grandmother. Sam is not identical to her vision, but she’s close. Years later, when my son talked about schoolyard games, I had the idea for the Perdition Games mystery-thriller series. Children’s games can be downright traumatizing. So can the games that adults play.