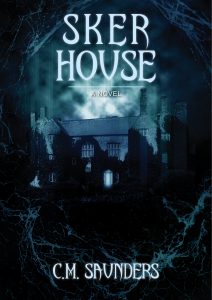 Dale and Lucy are two students with a fascination in the supernatural. One weekend, they travel to Sker House, South Wales, a private residence with a macabre history which has recently been converted into a seaside inn. They plan to write an article for their university magazine about a supposed haunting, but when they arrive, they meet a landlord who seems to have a lot to hide. Soon, it becomes apparent that all is not well at Sker House. An air of oppression hangs over it, while misery, tragedy and ill-fortune are commonplace. Gradually, it becomes clear that the true depth of the mystery goes far beyond a mere historical haunting. This is a place where bad things happen, and evil lurks.

Little by little Dale and Lucy fall under Sker’s dark spell, and as they begin to unravel the mysteries of the past, they realize that nothing stays buried forever.

Welcome to Sker House, a place where past and present collide.

“Sker House is a good, old fashioned ghost story that you’ll enjoy from beginning to end.”

What Inspired You to Write Your Book?
Sker House is an old-fashioned haunted house story, with a contemporary twist and a distinctly Welsh flavour. Though the characters are fictional, many of the events depicted in the book actually happened and Sker House itself is very much real. I visited the place with my parents many times as a child, and vividly remember falling under its macabre spell.

How Did You Come up With Your Characters?
The two main characters, Dale and Beth, are typical students of the paranormal, though one is slightly more sceptical than the other. I didn't realise until after I finished the book that Dale is a lot like me. Probably a little too much like me! The supporting cast are mash-ups of various colourful characters I've met during my life.

Book Sample
“What's the name of this place again?” asked Beth. </p>
<p>“It's called Sker House,” replied Dale, glancing across at her as he drove. He loved the way the breeze ruffled her long, dark hair, causing a few rebellious strands to fall over her eyes. </p>
<p>They took exit 44 off the M4 motorway, and continued toward their destination. The air was slightly chilly but the weather clear and sunny, a perfect spring day. The sound of the car's wheels on the smooth tarmac mixed effortlessly with the muted strains of Kid Rock issuing forth from the speakers of Dale's battered old Astra. The sun streamed through the trees and glinted off the windscreen as they wound their way carefully through a maze-like sequence of narrow country lanes. Dale gripped the steering wheel tightly. He was used to driving in the city. Navigating these lanes carved out of the earth for horses and carts half a millennia ago was a whole different ball game.</p>
<p>“Oh right, how could I forget?” said Beth, rolling her eyes. “ And the place is a guest house now, right?”</p>
<p>“Right,” said Dale, applying a little nervous pressure on the brake as they approached a bend. “I did a little digging around on the Internet. Apparently it was first built as a monastery, then it became a farmhouse for a couple of centuries and after that, you know, shit happens. It fell into disrepair, as the website says. Some new owners bought it a couple of years ago with the intention of turning it into a seaside Inn, and its taken this long to make the place liveable again…”</p>
<p>“But now its open for business, right? I mean, you did check that, didn't you? I don't wanna drive all this way if the place isn't even open yet…”</p>
<p>“Worst case scenario we'll just find another haunted hotel to stay in. Besides, technically you aren't driving. I am,” said Dale. Going back to the Land of his Fathers always stirred a complex set of conflicting emotions within him. Happy childhood memories rushed back and he basked in their glory for a while, but they were inexorably entangled with all the bad stuff that followed and he was powerless to stop his mind returning to that dark place. </p>
<p>“You know what I mean,” Beth protested. “This little jaunt of yours is still taking up my time and energy…”</p>
<p>“Ours. This little jaunt of ours. This is as much for your benefit as mine, remember. But to answer your question: yeah, its open. I talked to the owner just yesterday. He's very excited to have us stay.”</p>
<p>“And why, pray tell, would he be so excited by the prospect of a couple of students coming to stay?”</p>
<p>“Lets just say that I was a little economical with the truth…”</p>
<p>Beth tutted and shook her head. “What did you tell him, moron?”</p>
<p>“Hey, there's no need for the personal abuse. I didn't tell him anything bad. I just implied that we are journalists going there to write a feature for a big national magazine. I didn't specifically say those particular words. I just told him we wanted to do an article about Sker and let the guy's ego do the rest. I convinced him it would be good publicity for the place. In the end he even gave us a discount on the room.”</p>
<p>“Dale! What is wrong with you? We do NOT work for a national magazine! We're journalism students doing a write-up for a pissy campus rag nobody reads!”</p>
<p>“Hey! Solent News is NOT a pissy campus rag. It's kind of a national publication.” Dale reasoned. “We could send copies anywhere if people wanted to read them. That makes it national. Hell, that makes us international. Intergalactic even, we could put a copy on the next space shuttle and be the first magazine in space. How would that be for a PR stunt? If I had a budget, man, I would be awesome. There's a difference between lying and bending the truth, you know. Like I said, I just wasn't entirely honest. It's what journo's do, Beth. It gets results. In this case, it got us a room discount.” </p>
<p>“S'pose so… And the place is supposed to be haunted, yeah?”</p>
<p>“It's about as haunted as haunted gets, baby!” Dale replied with a grin. “Haven't you ever heard about the poor Maid of Sker?”</p>
<p>“Can't say I have. Was she your last girlfriend?” </p>
<p>“Haha, very funny,” Dale said. “No, actually. For your information, the Maid of Sker is the name of the ghost that haunts the place.”