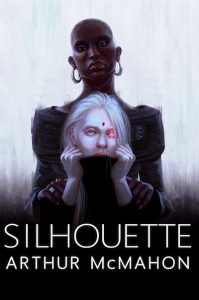 Born a slave to an alien corporation, Susan Singh escaped with the help of a politician who would shape the young girl into a deadly force of human vengeance.

Alien factions are tearing down the walls of human civilization. Men and women struggle to survive in a universe where humankind is considered an inferior species to all other sentient life. Leslie Folami presides over a clandestine council of world leaders bent on establishing the respect humanity deserves, even if it means starting a war that they cannot win. Unknown to her peers, Folami has sent her assassin on a perilous mission that might give them a fighting chance.

Raised as a secret tool for Folami’s political schemes, Susan was trained in the ways of the Enforcers from the past, taught to harness the shadow to her will and live as death incarnate. A decade passed under Folami’s tutelage before Susan was given the assignment she had been waiting for, revenge on the alien menace plaguing her home world and a chance to free her family.

What Inspired You to Write Your Book?
Silhouette was inspired by my need to expand my understanding of the universe I created in my debut novel, Frostarc. Silhouette is not a sequel to Frostarc, but a separate story with unique characters set in the same space-pioneering universe.

How Did You Come up With Your Characters?
I wanted to reach outside of my comfort zone. As a white male I best understood how to create such a character and so did for most of my previous writings. Silhouette is a young woman of Indian descent who happens to be albino, and her teacher is a regal African woman. These characters challenged me in many ways, which made writing for them all the more frightening and fun. The characters fit their roles well and with thorough research I believe I helped build them as they should be.

Book Sample
“We have murdered our leader, slain my friend, and now we must witness it.” The dark-skinned woman in voguish military garb walked away from her council table. She revealed a hidden screen from behind a bookshelf and initiated the recording. The video played for all of the council to see.

The recording began with the perspective of a fly on a wall in a stately office. On one side of an ancient desk sat a man, and on the other a mystery. The man wore a blue suit with a red tie. Sweat dripped from his brow. The strange being across the desk was lanky, yet alluring, and sat perfectly still.

“This agreement will protect Erde from further atrocities and bring culture and new technologies to our world,” said the man. He was Archon Pewts, leader of humanity’s most populated planet. “No nation was ever ruined by trade, they say.”
“Indeed,” said the alien being through an unmoving, vocalizing orifice. The only part of its body which moved were its scanning eyes. “Giving us permission to enter your planetary sphere will allow us to stop others from harassing your world. Granting us access to your DNA library will prevent my people from scavenging for it along all of the human lands. We Pheeb will come to your world, Erde, and share it with you. Your humans will be welcome to visit our worlds once you are capable of reaching them.”

“Our technology isn't there yet, Ambassador,” said the Archon, “but with your help, it soon will be.” The Archon raised a glass of clear liquid to the being from the Pheeb.

“I will toast with you to that,” said the being. It raised its glass but did not drink from it. “Now, let us sign and make our promises official.”

A shadow slithered out from behind the grey, silver-lined draperies and darted around the table, sliding behind the alien being. Arms extended from the darkness and struck hard at the alien’s neck. The Pheeb recoiled, but the shadow jumped high and wrapped its arms around the being’s head, pulling down with its momentum over the back of the chair, breaking the creature’s neck. The Pheeb fell from its seat and collapsed to the floor, still and lifeless.

“No!” bellowed the Archon. The most powerful man alive jumped from his seat and backpedaled, pushing himself up against an immense window which overlooked the night lights of the capital city. The pitch-black figure rose from its kill and walked toward the Archon. “No! What have you done? We would have been protected. Erde would finally have been safe from….” A blade crossed his throat. The Archon slid down the window and sat against it, his hands pressing tight into the gushing wound.

The shadow threw the blade to the ground and walked over to the room’s shelving. It plucked the camera from its hold and ended the recording. The video paused on the final scene: a black silhouette looked into the camera, and over its shoulder the Archon had collapsed into a pool of his own blood.

“Millennium V, a Leviathan class cargo ship was hijacked at 2300 standard yesterday en route to Erde by way of Fujisan. Yarlian gangs, we believe. They wanted nothing with the ship, only its contents. Killed the entire crew. Jettisoned their bodies. Took every last ounce of cargo aboard and left the hollowed out vessel to float through the cosmos. Contractors from Erde were sent to recover the ship.” Ticker stood at a large, wooden dining table as he addressed his peers. Heavy curtains covered the windows. Assorted table lamps supplemented the soft lighting of the homey room. “Erde was furious. Leaders demanded action by the Intergalactic Senate, but their voices went unheard. The people of Fujisan could only mourn their losses without aid from the community. They don't have the resources or technology to go after the attackers.”
“That is why we are here,” said Presider Folami. “Humanity needs representation in the Senate. For too long we have been ignored by the intergalactic community at large. Our individual worlds do not have the necessary resources to defend themselves against alien threats. We need strength, unity.”

“Cooperation,” said the shadow in the doorway. All faces at the table turned toward the apparition. The figure melded seamlessly into the darkness of the room beyond. The shadow stepped forward, revealing its petite frame. Its matte-black suit blended with the shadows, and as it walked into the bright lights of the meeting chamber it still appeared as if it was caught in the shade.

“Yes,” said the Presider. All eyes turned back to the Folami. “Cooperation. We are all here, every one of us, because we strive to rebuild the Cooperation. There are a dozen human worlds, and each one is under constant threat of alien misconduct. Yarlian gangs continue to raid our trade ships, all but uncontested by our own defenses. FF scavenger ships pilfer our unprotected satellites and space stations. Planet Nye is enslaved by a Burmin mining corporation. Secretary Richards, your planet's moon has become an established outpost for an unknown entity without your permission. People, leaders within your homeworlds, the time to act is now.”

“But how we act is important,” said a stocky man in a brown suit which was adorned with golden pins. “This woman in the black outfit, she is an assassin. She murdered Archon Pewts by your orders. She's been the cause of other deaths, havoc, and destruction. We have yet to even see her face, so how can we trust her? You call her an ally; I call her a menace. We cannot continue to be so ruthless. Political negotiations are the path to rebuilding the Cooperation.”

“We must do what is necessary, Minister Rivera.” The Presider’s voice erupted with rage and sorrow. “Victor Pewts was a man I called friend. He was a good man, a man with a family, but he was leading Erde down a path that would only worsen humanity's standing in the galaxy, one that would divide us even further. He acted as he thought was right for his people, but he failed to see the larger picture. His beliefs could not be swayed.”

“And at the upcoming Erdian Delegation Meetings you seek to replace him,” said Rivera. “You killed a world leader so that you could succeed him.”

“We are at war, Minister.” The Presider struck the table with her fist. “Humans are politically insignificant. One of our planets is enslaved and no other entity cares to take note of it. Our people—not Erdian, not Nyian, not any one planet—but all of our people, humans, we are being mistreated and murdered by numerous alien factions without the intergalactic community even batting an eye for us. We must act now before humanity is reduced to nothing more than a scattering of tribes as the alien factions take over our worlds, one by one.

“Our operative Silhouette is a vital key to our success. She does what needs to be done by the Presider's command, my command, like the Enforcers of the past.”

“The Enforcers were more than assassins,” said Rivera. “They were diplomats as well. One would have the sense to enter a discussion at the very least before killing someone in the name of the Presider.”

“We do not have the benefit of the power the Cooperation once held long ago where we could spend time on political discussions,” said the Presider. “No one outside of this table fully knows who we are and what we are striving to achieve. You, the other leaders here at this meeting, and I deal with the politics. Silhouette handles everything else. I will say no more on this topic. We have more reports and planning to get through.”

The Presider looked around the table and met the eyes of each individual. Once satisfied that none would voice anymore concerns, she turned her attention to the shadow in the room. “Silhouette, you may leave. I will speak with you later.”

Folami waited for Silhouette to exit, holding on to the silence and tension in the room until all of the world leaders at the table returned their gaze to her. “Ticker, thank you for your report. President Dawkins, how went your talks with the Ethnarch of Revel?”

“As expected, Presider. He sees no benefit in joining our cause.”

Silhouette left the safe house, sneaking through the city’s dark alleys and then crawling through a window into an abandoned building’s basement. She stripped off her shadowsuit, which was similar to peeling the darkened skin from a ripe banana, and pulled out a pair of flats and a periwinkle dress from the purse she had stashed in a rusting file cabinet. She rolled up her shadowsuit, tucked it inside the purse, and carried it over her shoulder as she exited through the back doorway. “Guess I'll head home for a bit.”