You are here: Home / Fiction / Shred (Cuts of Flesh) 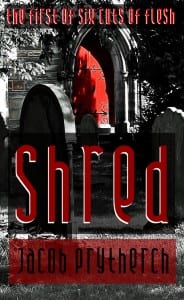 When Aleister Ward left the Wyldston police force to become a private investigator he hoped that the horrors that he had seen in his past would remain solely in his nightmares, however his newest case threatens to open up old wounds and create vicious new ones. As he is trying to be the father that his daughter deserves in the absence of his wife, he is pulled into a multiple murder investigation where he must try to clear his name whilst simultaneously finding the root of the sinister killings.

Jacob Prytherch was born in 1980, leaving the splendour of Derbyshire for the Midlands at the age of five. He started writing when he was seven due to a love of Tolkien and has been writing ever since, studying English at university and thoroughly enjoying every moment. The Binary Man is his first novel. He lives in Birmingham with his wife and two daughters. His second novel Heal The Sick, Raise The Dead will be released in autumn 2012.