“Someone’s killing shifters in prison, and Patricia needs help catching the culprit. The cougar enlists the help of Stu and Ricky, a techno geek and a reformed criminal, a mismatched pair, who turn out to also be her mates. But Patricia’s already loved and lost one man. Does she dare allow herself to care again?

Older isn’t just wiser, it’s sexier, or at least that’s what a socially challenged wolf and a bad boy panther think. Forced to work together to catch a killer, Stu and Ricky soon find out they’ll have to learn to do more than tolerate each other when they realize a hot, almost forty cougar is their mate. Can they find a way to work together and make their cougar purr?” 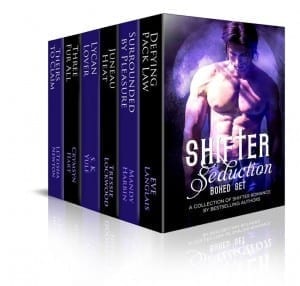 Author Bio:
Defying Pack Law, by Eve Langlais, is book one in her bestselling ‘Pack’ series. It’s followed by Betraying the Pack and Seeking Pack Redemption. Book four is currently in progress.

Juneau Heat by Tressie Lockwood is book one in her bestselling “Urban Heat” series. Book two is Venice Heat, available on Amazon, and book three, Miami Heat, is coming in March.

Three Fur All, by Crymsyn Hart, is the first in her Fur World series. Passion Fur Three is the next in the series. She is currently working on the third book in this series.

Theirs to Claim, by LeTeisha Newton, is the first of the bestselling Claimed Series. The story continued in The Fire of His Claim, and ended with the recently released Accepting Their Claim. She is currently working on book two of her Taken Series and the start of a new shifter series.