You are here: Home / Children and Young Adult Books / She Dreamed of Dragons by Elizabeth J. M. Walker 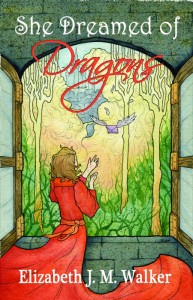 Trina is a fifteen-year-old dragon mage in a kingdom ruled by witches and wizards – the same people who have brought dragons and other magical creatures near extinction. Trina can barely control her fire powers and is desperate for an apprenticeship, but finding a fellow dragon mage to be her teacher is proving more difficult than coming across an actual dragon.

Then there’s the Royal Tourney – a competition presented by the Queen to find a successor to the throne. Trina heads to the competition in the hopes of sparking some interest in the mage society and earning herself an apprenticeship.

She never intended to be a frontrunner in the competition.

She never meant to catch the attention of the evil witch trying to take over the throne.

She never expected to fall for a wizard.

Now Trina must face tough decisions about who she is and who she could become. Trina must ask herself: Can she really win the Royal Tourney?

What Inspired You to Write Your Book?
When I was in high school I remember watching the very first season of American Idol, when “reality TV” was first becoming popular. I thought it’d be fun to write a fantasy story about young people attending a competition to find a new prince/princess.

How Did You Come up With Your Characters?
My main character, Trina, is a dragon mage – which in this world means she has the powers of a dragon, such as being able to create fire. However, I also wanted her to be a very normal, down-to-earth character.

Book Sample
When Trina returned to school, she was expecting to find the students meandering on their way to the meal hall for dinner, but instead there was a buzz of excitement in the school.

“Trina!” she heard her roommate, Oriella, call. Trina’s small friend seemed quite disturbed as she pushed through the crowded entrance hall toward her. Following closely behind her was Trina’s pixie mage cousin, Eddy.

“What’s going on?” Trina asked them.

“Only the most amazing thing ever,” Eddy said as he caught up to Oriella and Trina. He was two years older than Trina but not much taller. He had perfect curls of brown hair and sky blue eyes. Oriella was the same age as Trina but much smaller, since she was an elf mage. She had lightly tanned skin, a freckled nose and long waves of dark blond hair which hid her telltale pointed ears.

Oriella elbowed Eddy aside. “More like the dumbest thing ever,” she said as she cocked her head to the side and looked concerned. “The apprentice thing didn’t work out again?”

“No…but at least this one was nice. He gave me this,” Trina said and pulled the red dragon out of her pocket to show her friends.

“You girls can catch up later,” Eddy said, dragging Trina away from Oriella and toward the main clump of chattering students in the entrance hall. “Being turned away from another stupid apprenticeship couldn’t have happened at a better time. Ta-da!”

Eddy gestured toward a large poster hanging on the wall. Trina rubbed her eyes and looked at the overly decorated poster that was covered in fancy violet writing and bordered with intricate silver curlicues.

“Royal Tourney?” Trina read off the poster. “What is this?”

“Her majesty, Queen Valicity, is holding a competition to name a new successor!” a nearby pixie mage gushed, curling a piece of pink hair around her finger.

Trina pushed her way through the crowd to get a closer look at the rest of the poster, Eddy and Oriella close at her side. The poster was for a competition to find the next successor to the Dorlith throne. The king had been transformed into a spider by an evil mage over fifty years ago—a powerful spell which no one was able to reverse. Apparently, since King Frederick had been spinning webs as a spider for the past fifty years, their majesties hadn’t had a chance to have a child of their own to be prince or princess and the royal line had run thin.

“They’re having some sort of silly competition to name the next ruler of the country?” Trina asked incredulously.

“Aha!” Oriella said triumphantly. “I knew you would say that! I knew someone would have some sense around here!”

“Exactly, that’s—” Oriella began, but was interrupted by Eddy.

“Look!” he said, pointing to a part of the poster Trina hadn’t had a chance to read yet. “It says right here anyone in the Dorlith Kingdom, aged twelve to eighteen, is allowed to compete in this tourney. Trina, it means mages can go too, and do you know what that means?”

She gave him a skeptical look.

“It means I can be king!” Eddy said triumphantly.

Oriella looked disgusted. “I’d sooner remove my own eye and eat it than live in a country where you are king.”

“Eeewwww,” the pink-haired pixie mage and her friends said and backed away from Oriella.

Trina smiled. She had been away from school a lot during the past month, searching out apprenticeships. It was nice to be back, even if her two best friends never seemed to agree on anything.

“Eddy, are you forgetting why the king is a spider, the reason for this stupid competition in the first place?” Trina asked.

“Well, yeah, some evil mage tried to kill the king fifty years ago, but he messed up, and the king ended up a spider instead. You really can’t think witches and wizards still hold a grudge on all mages just because one crazy person happened to be a mage…” he trailed off as he noticed all eyes were on him.

“What rock have you been living under, pixie boy?” a boisterous troll mage bellowed, and everyone laughed.

“They haven’t forgotten, Eddy,” Oriella told him, “and they never will. It will always be their excuse for hating us, even if we had nothing to do with it.”