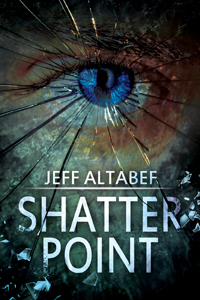 When her 19-year-old son Jack miraculously recovers from a serious head trauma, Maggie is sure her luck has changed. But when she’s abducted by a shadow from her past – a phantom with dangerous sapphire eyes – it’s up to Jack and his younger brother Tom to unravel the mystery and save their mom from a deadly psychological battle.

The brothers seek help from their colorful great aunt, who exposes them to a world of nefarious family secrets, explosive government conspiracies, and a series of horrific murders. Together they must navigate a dark underworld full of political subterfuge and class warfare.

Yet as they search for their mother, Jack changes—he’s raked by skull splitting headaches and weird visions. How exactly did he recover from his coma, and how does this tie into the psychopath who’s abducted their mother?

Will Jack and Tom save Maggie before Cooper reaches his shatter point? Does Jack have enough time left?

“The book combines my favorite aspects of my favorite authors into one. James Patterson – the master of the psycho killer who kidnaps girls, Patricia Cornwell – scientific thriller, and Dean Koontz – really spooky plots.” – Kat Biggie, No Holding Back

“Shatter Point is an exciting novel of suspense, action, drama and even a little bit of horror…. It’s definitely one of the best novels out there right now.” Next Page Reviews

“When I reached the last 100 pages no one was going to be able to stop me reading until I knew the ending!” Olivia’s Catastrophe

What Inspired You to Write Your Book?
The characters inspired me and the relationships I could create among them. Two of the main protagonists are brothers (aged 17 and 19) and I really wanted to explore their relationship as they try to unravel the mystery of their mom’s abduction.

How Did You Come up With Your Characters?
I always start with characters when I begin a project. I’m never quite sure where they come from, but they get very detailed and nuanced. Two unusual characters in the book are Aunt Jackie and Cooper. Aunt Jackie is a seventy year old cantankorus woman who doesn’t mind getting her hands dirty. Cooper is the main antagonist who really jumps off the page.

About the Author:
Jeff Altabef lives in New York with his wife, two daughters, and Charlie the dog. He spends time volunteering at the writing center in the local community college. After years of being accused of “telling stories,” he thought he would make it official. He writes in both the thriller and young adult genres. Fourteenth Colony, a political thriller from Tate Publishing, was his debut novel. Evolved Publishing published his second novel, Shatter Point, a thriller.
Jeff has a column on The Examiner focused on writing, and a blog designed to encourage writing by those that like telling stories. You can find his blog, The Accidental Writers’ Workshop, on The Chappaqua-MountKisco Patch.