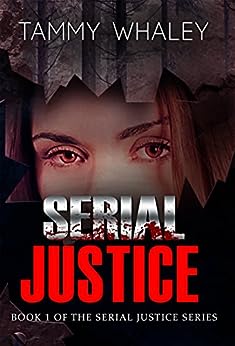 Agent Miriam ‘Mac’ Mackenzie is called to listen to the deathbed confession of a serial killer. The accused killer spent twenty years hunting and killing the most horrific criminals . The case is even more bizarre in that the killer took her daughter, Dana, with her on her mission to destroy evil. After two FBI agents are killed Mac finds herself in the center of an internal investigation. As the clock ticks down to the final showdown, Mac realizes nothing is as it seems.

What Inspired You to Write Your Book?
There had been a series of news stories regarding large Internet pedophile groups. These groups had gone from being isolated individuals to large, billion dollar industries thanks to the ease of file sharing. I asked myself, what would happen if one woman went on a crusade to destroy pedophiles? The idea evolved into Serial Justice.

How Did You Come up With Your Characters?
Carson Davidson is an amalgamation of several strong women I have known throughout my life. I mixed in a dash of psychosis and added a pinch of mother lion. Agent Mackenzie is based on a few of the police cadets I met when I got my degree in Law Enforcement/Corrections.

Under the harsh reality of the hospital lights the woman appeared slight and pale. If she had to guess, Mac would put her age near forty. A balloon bouquet floated up from its anchoring weight on the windowsill. IV lines snaked out from under the sheet, stretching up the pole to bags containing mysterious liquids. A heart monitor beeped rhythmically. An overpowering antiseptic smell almost covered the odor of dying flesh. The patient sipped from a cup of ice water, watching her two visitors enter the room.
Both wore dark business suits that met the FBI’s dress code requirements, though the woman’s had a more feminine cut. The man looked to be an ex-marine who still hadn’t realized he was allowed to grow out his buzz cut. At six two and two hundred pounds he probably felt invincible. The woman in the bed had killed many invincible men just like him. The female FBI agent was medium height, with short blond hair and brilliant green eyes. Both had a 9mm Glock strapped to their right hips.
Taking the agents off guard, the woman in the bed spoke first, “You must be the FBI Agents I requested. Please come in, have seat.” She indicated the recliner and hard backed visitor’s chair next to it. Both agents remained standing.
“Ms. Davidson, I’m special Agent Mackenzie and this is special Agent Ford.” the female Agent nodded toward her partner. “We’re here because of a telephone call you made to our Boulder office.”
“Yes, I called four days ago, what took you so long?” The patient asked.
“Well ma’am, as compelling as your story is, we had to check a few facts before coming here.” Agent Ford replied.
“So tell me Agent Ford, was it the death of Santos or Jimmy “The Geek” Delany that caught your attention? Because I know damn well you don’t give a shit about any of the other scum I’ve scrubbed away.” The last sentence was said between bouts of coughing into a tissue covered with specs of blood.
“Of course we at the FBI are concerned with any suspicious deaths of all US citizens.” Agent Ford began.
“Honestly Ms. Davidson, it was the details of the Delany case that caught our attention.” Agent Mackenzie cut in before Ford could hand out more of the company line.
“I thought so. When I killed that little bastard I knew the FBI was conducting surveillance from the top floor of the bakery across the street. Word on the street was that you’d had him in your sights for two years prior to his death. He used to brag about running you around in circles.” the woman laughed.
Before Ford, who was beet red and stuttering by this time, could speak, Agent Mackenzie asked, “So what can you tell us about the murder of Jimmy Delany?”
“I’m going to give you all the answers you want and then some, but I just want to be clear on a few rules. One, I’m going to tell this my way, in my time. Two, this is a death bed confession; I’m never walking out of this hospital. The only concession I’ve given is that I’ve temporarily lifted my Do Not Resuscitate order until I have finished this confession. That means that the doctors can keep me alive by any means possible until you eek out every fucking detail. Three, my daughter is an innocent; she may or may not choose to talk to you. Four, I will get my pain medications and have frequent rest breaks. Do you understand?”
“Now listen, you can’t just..,” before Agent Ford could finish the patient stated,
“Yes, I can, and you will. The paperwork is on my bedside table. You’ve got enough damn lawyers working for the FBI that between my lawyer and yours, this should be set by tomorrow. One other condition, I don’t like you, Agent Ford, so I will only talk to Agent Mackenzie. Now I have a couple of questions. Do you want the details of only the Delany murder or all of the one hundred and seventeen murders I’ve done? Do you want only US citizens? Only US citizens in the US? Or every murder I’ve committed around the world?”
After a stunned pause, Agent Mackenzie replied, “We’ll have to get back to you on that ma’am.”
A nurse in navy blue scrubs entered the room pushing a cart loaded down with supplies. “You have to leave now, she needs her rest.” She stated as she began scanning the IV bags on the cart.
The Agents nodded to one another, “We’ll see you tomorrow Ms. Davidson.” Agent Mackenzie said as she walked out the door.
As they turned to walk toward the elevators, Agent Mackenzie heard the nurse asked, “Are you having any pain Ms. Davidson?
“Every day dear.” The woman replied.

“What do you think?” Mackenzie asked.
“She is definitely a woman who is used to being in control. If she has killed as much she says she has, she would have had to maintain strict self discipline to keep from decompensating. She hates men. I was surprised when she immediately cut off my line of communication. This lays a big burden on you Mac. I’m sorry. I was trying to provoke her just not to that level.” Ford stated. Anyone looking at Ford would be surprised by his articulated speech. Then again, who could guess that the ex marine also had a Master’s in Psychology and Criminal Justice?
“As long as I have you and the rest of the team backing me up I think I can handle this interview. With an ear bud and microphone you can guide me. Honestly Tom, I’m having a hard time believing this woman killed over one hundred people.” Mackenzie said.
“Don’t let looks fool you Mac. I served with nineteen year old girls in Iraq who killed insurgents with just as much, if not more, gusto than some of the guys.”, Ford said as he pulled out of the hospital parking lot.
Neither Agent noticed the dark haired girl standing just inside the hospital entrance. Taking what looked like a Bluetooth ear bud out of her left ear she turned and headed toward the elevators. On the Oncology floor she stood outside her mother’s room watching her sleep.
“She had two visitors today. She refused to let me give her pain medicine until they had left. I finally talked her into a shot of Dilaudid with her Phenergan. She should rest comfortably for at least two hours.” The day shift nurse said as she walked up to the open door.
“Then I’ll come back later when she is awake.” Dana said, turning away from the room. This is good, she would be able to run her errands and still not miss any of mother’s waking hours. Dana thought this all out confession was a bad idea, but this was her mother’s wish, so she would see it through.