You are here: Home / Fiction / Romance - Erotica / SECRETS IN BETHLEHEM by Kate Porter 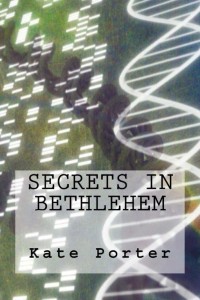 There are laws banning human cloning for a reason.
Travis Brody is a man with a tortured past who has built a wall of arrogance, antagonism and animosity between himself and the world.
Janey Carmichael is a young woman living a life besieged with disappointment and poverty, but has never lost hope for the happy ever after ending with the man she fell in love with at first sight.
Jess Messenger is a terrified little boy, alone, far from home and witness to the vicious murder of Joseph, his guardian. As the center of a conspiracy he’s too young to understand, Jess holds the secret that can bring down The Committee: a covert society that has been in power for over one hundred and fifty years.
Now it is up to Travis and Janey to protect Jesse from the assassins the chairman of The Committee has set on the trail of this very special little boy, putting themselves in the crosshairs of an assassin’s rifle scope.
The first surviving human clone is not the secret they’re trying to keep hidden . . .where the DNA came from to clone him, is.

What Inspired You to Write Your Book?
There were several things that contributed to the inspiration to write Secrets in Bethlehem. The main thing I supose is that after the loss of my husband several years before, I couldn’t put my dream of becoming a published author off any longer. I realized that if I kept putting it off as a future happening, it may never become a reality. You are not promised tomorrow, or even the rest of today. If you don’t reach for the stars, the stars will not reach for you.

How Did You Come up With Your Characters?
My characters tend to introduce themselves to me during the preliminary brainstorming stage of building character biographies. Travis Brody and Janey Carmichael remind me a lot of myself at their age with the self-doubt and seemingly unsurmountable obstacles that befall them. Though I didn’t have hired assassins chasing me, I could empathize with Travis and Janey with the emotional issues and traumas from which they’d both suffered.