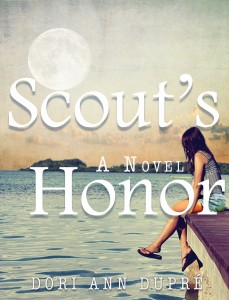 In Haddleboro, North Carolina, Scout Webb is a 14 year old kind and spirited small town southern girl and a tomboy much like her namesake, the young narrator from her mother’s favorite book. With both her name and her Christian faith deeply woven into the fabric of her identity, Scout always felt like she had a lot to live up to and was the kind of girl who made her parents proud.

It’s August 1983, and Scout is playing on a summer baseball team with Charlie Porter, her best friend since Kindergarten. More than anything, she is looking forward to her last few weeks at Camp Judah, a Christian camp near the Catawba River. She can’t wait to see her big crush “Brother Doug,” the thirty-two year old camp lifeguard who has watched her grow up each summer since she was seven years old. But after a fateful few days and one catastrophic event during her last day at the camp, Scout was changed forever.

Written through multiple narrators over the course of twenty years, this story follows Scout’s personal struggles as a freshman away at college in Raleigh and later as an overworked single mother approaching middle age, where she is forced to confront the causes of her own quiet suffering, the consequences of her actions and why even the eternal love and devotion of just one true friend can’t save her.

A story of a self, lost…a self, loathed…and a self, rediscovered…it examines the harsh and cruel ways in which otherwise well-intentioned and decent people treat each other…even those they claim to love, but even more so…ultimately, how we treat our own selves.

What Inspired You to Write Your Book?
I wrote this story for all the young girls out there who have been taken advantage of by an older man in a trusted position of authority, either sexually or emotionally or both. I wrote it for those who still need to reclaim their honor, to encourage them that their honor is already within them. Oftentimes, because their situation was “consensual,” these girls do not know what really happened to them until much later in life. At the time, they were simply too young to process the entire manipulation and eventual trauma correctly. This kind of damage changes a girl for the rest of her life in ways that cannot be necessarily quantified. So many girls never deal with the emotional suffering related to having their innocence taken because of the shame associated with it; therefore, these stories go untold. They live with it and it affects their later relationships, their judgment and decision making and how they deal with other difficulties in their lives. Scout Webb’s story is just one kind of journey that an untreated traumatized girl takes toward eventual healing.

How Did You Come up With Your Characters?
First, I wanted an all American southern girl and boy. So I created Scout and Charlie. Scout is supposed to be every girl, every woman. Charlie is supposed to be the epitome of a man, in my opinion. He is a true friend in every way. I wanted Doug to be an average husband and father who is struggling in his life and marriage with the typical challenges, who is otherwise likeable, but finds himself going down a dark road where there is really no return. This sometimes happens to otherwise good people who are not dealing properly with their own internal issues. I wanted him to have a regular exhausted wife of a toddler in Cammy. I created Rob to be like so many good and decent men who always do the right thing – until they don’t, lose their way for a short time for one reason or another, and then have to spend the rest of their lives trying to get back to being the man they once were. Oftentimes, a man who strays in his marriage is defined by that one wrong thing rather than the millions of wonderful things he has otherwise done in his life. I created Rita to be a very well grounded and emotionally secure woman who is able to separate her emotions from rational thought, who loves and is strong enough to forgive as well – to see past the bad act and instead a human with flaws, worthy of forgiveness. I created Jemma to be the kind of girl that Scout was supposed to have been had she not suffered at the hands of Doug as a fourteen year old. Thom Robinson was created to represent that kind of man who everyone loves on the surface until he reveals what he truly is. And he only does this after he has sunk his hooks into his emotionally damaged prey – otherwise know as the narcissist. It was easy to come with him because they litter the airwaves and movies and magazines and political scene: powerful, manipulative and larger than life personalities, putting on a big show.

One part of writing this book that was a lot of fun for me was being sure to include all of my relatives’ names in the story somewhere. For example, my brother’s name is Jon, so I made Scout’s brother’s name be Jonny. Micaela is Scout’s college roommate. That is my niece’s name. There’s a Chase and a Samantha, also my niece and nephew. My family’s names are littered throughout the story as camp counselors and side people. Lee (Leigh) and Raelene are my girls’ middle names.