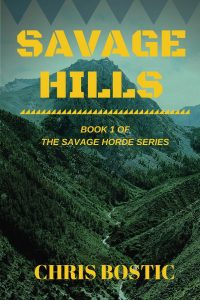 The Republic’s kids were soft. Technology had made them weak. Pushbutton war was a great concept, and indeed had let them steamroll many a weaker nation. But the Regulators weren’t made for this kind of war. The kind that required an iron will and a reservoir of endurance. Legions of troops would have been helpful too, but the Republic had been too decimated from years of empire-building to offer more than teens like Joe to the fight.

And then the savages attacked with a fury never imagined.

What Inspired You to Write Your Book?
The events in this book are very loosely based on China’s entry into the Korean War, and is meant to relive the valiant retreat from the Chosin Reservoir under the unexpected onslaught. Of course, this is a mildly futuristic work of science fiction with unusual creatures and a dystopian backdrop, so any ties to the Korean War are far more inspirational than in any way realistic/historic.

How Did You Come up With Your Characters?
As with my other books, I like to put teens in challenging situations. In this case, I liked the idea of having female soldiers serving alongside men in a very difficult situtation, and explored that scenario with a grizzly male sergeant who feels like the women have no place in combat.

Book Sample
Joe could spit again and again and never rid himself of the stench of death. Nothing could take back what he’d seen. Too many friends and so many savages had lost their pathetic lives in those forsaken canyons behind enemy lines.