You are here: Home / Fiction / Action & Adventure / Samson:War of The Judges by Walter James Lovett II 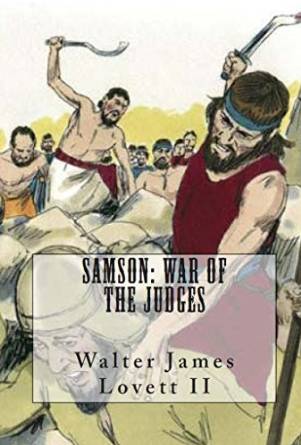 An elite group of ancient Israeli military leaders are tasked with securing the freedom of their clansman from a series of ruthless oppressors. Known as Judges these select men and women fight decades for their homeland as well as their freedom from a group of savage Imperialists known as the Philistines. The Mighty Samson is the last in the line of the Judges.Endowed with supernatural strength and abilities,Samson battles his clansman’s tormentors for years leaving casualties on both sides of the Gaza strip.It’s an all out war and the fate of Israel rest in the balance.

What Inspired You to Write Your Book?
I have been interested in Samson and his dynamic story since I was a kid. I loved watching the animated Hanna Barbara Biblical cartoons they showed on TV and even owned the series on VHS tape. It is important to me to let the people know who Jesus really is. However I wanted to be able to capture not only a child’s imagination but also the child in all of us. Samson’s story should definitely not be overlooked nor any of the other Old Testament patriarchs, these men where truly incredible. They fought in wars for the freedom of their clansmen and also fought for the one true God. I have done extensive research on Samson. .Looking at his life in I can say that addition to warfare, judicial duties and religious obligations He would’ve been used for farm work. I don’t think it’s farfetched to say that carrying a ton a day would’ve been easy work for him. Because The Holy Spirit is intelligent and is part of the Trinity of God; The Holy Spirit knows of man’s inabilities to handle certain feats due to human frailties. So it’s not too farfetched to say that the Holy Spirit would’ve genetically engineered his body, his muscles, his bones and his body composition to with stand what his body was going to go through. After his daily tasks and even battle chores Samson would’ve had more than an extra pep in his step. This is also supported by Samson strict diet. Why else he had to abstain from foods that are forbidden? I have always believed that it is because they had no nutrients to fuel his body.
Even though Judges is a book rooted in the study of human weakness when ensnared with the ugliness of sin it is also about The Holy Spirit and a testament to his majestic power manifested throughout the life of Samson as well as the other Judges. With each read, I feel as though the story is dedicated to the Holy Spirit and provides some insight into a tiny bit of his glorious power. The Holy Spirit is an unstoppable testament to the supernatural story of Samson. This is why I truly love the story of Samson. It is 4 Chapters of The Holy Spirit greatest display of power and might.

How Did You Come up With Your Characters?
Most of the Characters are directly lifted from the text, which comes from The Bible and Hebrew lore. The specific book this is adapted from is Judges. I did some research on the main villains who are actually mentioned elsewhere in the bible. Although it is Christian Fiction, most of the book can be described as non fiction.