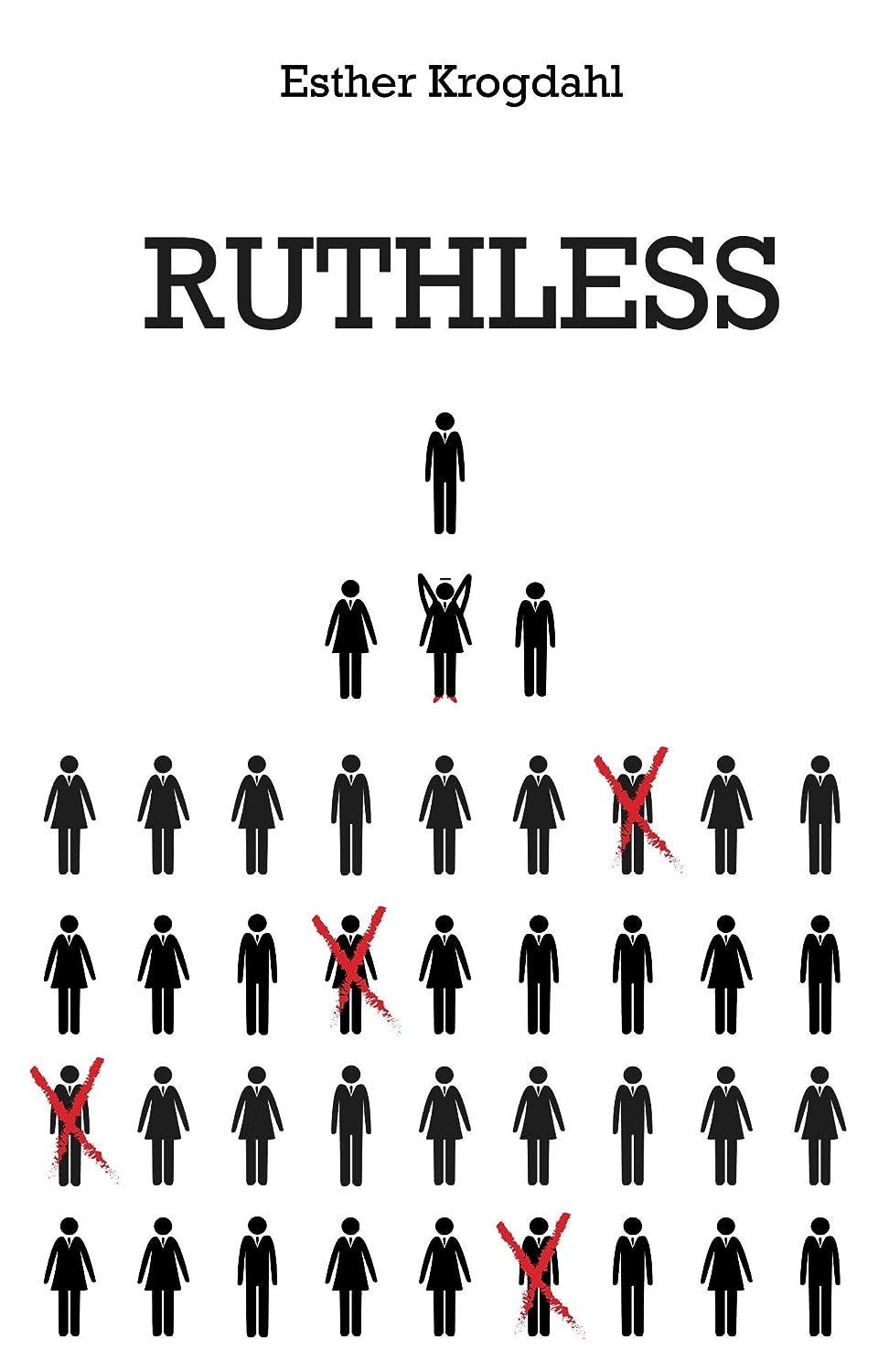 When career-driven Ruth lands a seemingly perfect job at GlobalCore- a chic yet mysterious global corporation, she prepares to dish out her cold and merciless brand of Human Resource Management. But there is something different about this company…
Ruth soon finds herself climbing the corporate ladder but this time as a matter of life or death. She must compete with industrious angels, hell-bent on success, as she struggles with her new eternal occupation that redefines “employee termination”.

Follow Ruth as she delivers damning employee evaluations to the most wicked souls that California has to offer. These aren’t the mild-mannered office workers Ruth is used to firing, these employees are rotten to the core, and they won’t be leaving without a fight.

What Inspired You to Write Your Book?
I was inspired to start writing Ruthless in 2010 after a vivid dream gave birth to the unique story. My overactive imagination has fed into my passion, resulting in a unpredictable and action-packed plot line.

How Did You Come up With Your Characters?
I suppose the main character Ruth is loosely based on on me – at least the way she thinks. Ultimately though, all of the characters are just born from my crazy imagination. I’ve borrowed names and some characteristics from friends and acquaintances but that is all.

Book Sample
It was clear now that the only help Ruth was going to get was from her new friend adrenaline. It felt as though it was pumping through her body like water through a fire hose. Ruth ran to the door and locked it. She wasn’t going to escape that way. She spotted a filing cabinet in the corner and ran over to it. It took all of her new fear-fuelled strength to push it in front of the door. It was only a second later that the thugs outside were rattling on the door handle and throwing their weight against it. Ruth raced over to the small window, collecting her compendium and sliding it into her bag on the way. She wasn’t going to leave any evidence behind. She peered down the two-storey drop and now saw the car below. She had to get down there somehow, and fast.

There was no obvious way down that Ruth could see. She certainly couldn’t jump. Then Ruth noticed the drainpipe that ran from the roof all the way to the ground. If she leaned out the window far enough, she could reach it and climb down. Ruth considered her limited options. Maybe she could call the police and hide in the office until they arrived. The filing cabinet seemed to be doing a pretty good job of keeping the men out.

Bang! A bullet pierced through the door and the cabinet.

Ruth opened the window as wide as it would go and swung a leg over the sill. Her Jimmy Choo stiletto pumps were starting to feel less glamorous and more like a liability. She kicked one off and watched it hurtle downwards and land roughly on the gravel road below. The other she pulled off and threw over the edge. She looped her handbag over her right shoulder and swung her other leg over so that she was sitting flat on the sill. Shuffling to the edge closest to the drainpipe, she strained to reach for it. Ruth almost slid off the sill but grabbed the window frame as her left buttock came loose. Fear was pounding in her head and chest. She had just seen the outcome of O’Malley falling from exactly this height so she didn’t want to follow suit. Ruth gathered herself and made another attempt to reach the pipe. As she did she heard the sound of the office door splinter behind her. They were almost in.

Ruth let out an almighty scream, clenched her thighs and pushed herself off the sill towards the pipe. After she fell a few feet, she managed to grab hold of it with both hands and pull herself against the warehouse wall. She couldn’t wrap her legs completely around the drainpipe because it was too close to the wall so she would have to rely almost solely on her arm strength, which was already beginning to falter. Ruth looked up at the small window. There was no way she could get back there now. The only way out was down.

Ruth began shuffling down the drainpipe, using her legs to grip the tube as best she could. The rusty parts caught on her skin but Ruth kept shuffling as fast as she could go.

After what seemed like several metres of progress, but was actually merely several feet, Ruth heard shouting from the room above. The warehouse thugs were in the office and they were looking for her. It wouldn’t be long until they checked the window and discovered her. She had to get down quicker, but jumping from this height would be suicide. Ruth was starting to feel hopeless. She couldn’t do this. Her arms were like jelly and despite the situation, she was starting to run low on precious adrenaline.
Tears formed in her eyes and she hugged the pipe harder for comfort. She couldn’t go any further. She was going to die here and it wasn’t fair. As Ruth blinked a tear from her eye, she slowly focussed on the piece of pipe in front of her. The pipe, brace and bolts here were almost completely rusted through. The pipe had come away from the wall a few inches so Ruth might actually be able to jimmy her legs between it and the wall.

Ruth suddenly had a brilliant and extremely dangerous idea. With renewed energy and strength, she shuffled down another foot so that she was holding on just below the rusty bolts. Then she started pushing against the wall with her feet. The bolts released and the rusted section of pipe broke away from the upper pipe but the lower part only bent very slightly away from the wall. Ruth held the broken pipe as tightly as she could and moved into a crouching position with her feet against the wall. She made one last push with every ounce of strength she had left and finally the drainpipe broke free of its support and began to slowly peel further and further away from the warehouse wall.

Ruth hung on desperately, her legs dangling precariously over the remaining drop. She was being lowered to the ground as the pipe bent under her weight. As long as it doesn’t snap, I might actually make it out of here alive.

Ruth looked up to see her earlier chaperone pointing a gun at her from the window above. She could hear cheering and shouting behind him. “Let me get the bitch! You couldn’t shoot a fish in a barrel. Move over.”

A bullet whizzed past Ruth’s head. This guy was getting his eye in and she bet that he wouldn’t miss the next shot. She looked down and saw that she now hung about three metres from the ground. She let herself drop and felt a sharp pang race up through her ankle into her knee as she hit the ground. She grabbed at her leg in pain. She was an easy victim lying there but she didn’t think she had the strength to pull herself up and run. She rested the side of her face on the cold sharp gravel, exhausted. Only two feet from her face lay one of her scuffed heels. In a moment of sheer bewilderment and shock-induced insanity, she reached out and grabbed it and then rolled onto her belly in order to better locate the other. It was three feet to her left so she stretched out her shaking hand to grasp it. For some reason, she wanted to die with her Jimmy Choos. Just as she hooked her index finger inside the heel, strong hands lifted Ruth into the air and she found herself being thrown over Vince’s shoulder.

Ruth saw the explosion of blood pop out of Vince’s back, just inches from her face. Vince didn’t seem to notice as he continued towards the car undeterred, each hasty stride causing the sharp pain in Ruth’s ankle to shoot up her leg. The next thing Ruth knew, she was being flipped forward and thrown head first into the car. The door was slammed behind her and Vince got in the driver’s seat. He jammed his foot on the accelerator, causing the car to jolt into action and fishtail down the empty road. Bullets ricocheted off the car as Ruth crouched in the back, shivering from the fear and pain.

About the Author:
I am a brand new action-fantasy author. I’ve recently published my first book Ruthless and I am currently working on the sequel- Heartless.

Writing is my new passion and I hope to one day turn all the crazy, adventurous ideas in my head into books that I can share with the world.

I currently juggle writing with a full time job as a Software Architect. I love to travel when I have the funds but when I’m at home I “make do” by playing Ultimate (frisbee) and video games.

I’ve learned so much about writing and publishing in the last few years; I try to help other new authors by providing information, tips and advice on my author blog. I’d love nothing more than for you to drop by and say hi at anytime – http://estherkrogdahl.me

Links to Purchase eBooks
Link To Buy Ruthless On Amazon