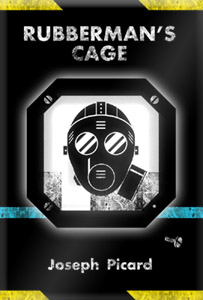 Lenth grew up in a lie.
Apparently there’s more than five people in the world.
Savage Citizens, orderly Providers, keepers of ignorance, and a damaged killer stand in the way of the world’s simple truths.

Four Brothers live their lives in an enclosed habitat as directed by the silent Rubberman above them. When they disobey, they get shocked. This is normal. It always has been.
When a Brother dies, they learn of death. When he is replaced by someone new, they learn they are replaceable.
When the ceiling above the ceiling cracks open, Lenth plans a journey beyond the known universe:

What Inspired You to Write Your Book?
My daughter’s hamster had an enclosed environment, with food, exercise and sleep being the main parts of his life. Over and over. He sometimes broke out to explore a little, and still understood so little of the worldly knowledge we humans take of granted. Then I looked at humans, who often trap themselves in routine, to eat, sleep, work, repeat. I took that notion a few steps further, and ended up with the environment that Rubberman’s Cage starts in, complete with a metal grating ceiling, and nourishment from funny little dispensers… then escape….

How Did You Come up With Your Characters?
Lenth is kind of an everyman type, except that he has very little knowledge besides his little environment. He was shaped by his situation, and an overall kind intent. Now that I think of it, all of the characters were forms by similar methods, including the badguy. Poor guy…

Book Sample
Diane squirmed through the crawlspace, doing a regular inspection of the various conduits that kept things running in the Provider areas. The darkness was cut by Diane’s headlamp, a boxy little thing strapped to her head. The light, as much as it moved around, was enough for Lenth to follow her. Diane didn’t show any interest in sitting for a chat, but begrudgingly allowed Lenth to follow her as she worked.

Piping, vents, and electrical cords. Diane inspected every inch, paying extra attention to joints and connectors. Lenth couldn’t help but wonder if this kind of diligence would have saved Slim. Should Diane have caught that leak? If that particular little tube had been her duty, he couldn’t bring himself to blame her. She seemed to be doing her job with fine attention to detail.

“How often do you do this?” Lenth asked.

“A lot. These things go everywhere. By the time we’re done, it’s time to start over.”
“How far do you go?”
“Me? Provider levels only. Others go higher up or farther down.” She sounded tired. Not in the way that a lot of work can make you tired, but in the way that a lot of life can make you tired. Before they had crawled into the darkness, Lenth had seen that her eyes matched that feeling.
“Have you ever been—”
“I know why you’re here,” she snapped. “I know what you want, and you’re a fool.”
“What was so bad about it?” Lenth asked.

Diane turned around to face Lenth, which was no simple task in the crawlspace. Her headlamp shone almost directly in Lenth’s eyes, so she adjusted it a little. She took his hands in hers and squeezed hard enough that her knuckles cracked. “Don’t go,” she said quietly. Her eyes were a mix of anger and fear, and her breathing had become rougher.
Lenth stared into her eyes for a while, then asked what she’d likely been asked a hundred times. “What happened?”
Her eyes broke the stare and she looked away. For a moment, Lenth thought she was going to answer, but then abruptly, she turned back around and resumed working. Lenth followed silently for some time, hoping she’d have a change of heart.

Diane stopped. After a moment of shuffling, her light went out.
“What’s wrong?” Lenth asked.
“Shh!” was the answer. As Lenth’s eyes adjusted to the miniscule ambient light being supplied by an undefined source somewhere, he saw Diane reach to a pocket on her thigh and pull out a knife. Still facing away, she laid there silently. Lenth heard only her breathing, but Diane apparently heard something else. Her body shifted suddenly.

“Six, maybe,” she whispered. “Go,” she said, crawling backwards, forcing Lenth to do the same. Seconds later, Lenth heard what Diane had been hearing. Someone else was here, and they were now moving fast.
“He’s coming. Hustle!” Diane said. There he was, a dark shape coming from the right, yanking on a pipe to help him move faster.
“Monster!” came a male voice, harsh and furious. Diane’s body shifted to defend herself as the attacker reached them. Lenth tried to maneuver to go help, but Diane’s foot slammed in his path as she tried to find leverage. She screamed as the attacker’s voice came again, “Die! Die! Get out of our way and die!”
Diane yelped. Maybe as she attacked, maybe as she was cut. In the near darkness, and cramped space, Lenth couldn’t make out much more than a struggle.
The sound of a fierce thrust came once, twice. Diane stopped moving after the second, but the sound came once more.

Stunned, Lenth froze. Quiet quickly returned, leaving only the attacker’s heavy breathing, laced with hint of laughter with every exhale. Sounds of a little more movement, and then the voice came, now much calmer. “Ooh, handy!”
Diane’s headlamp, now being held in a hand, was turned back on. It flickered past the attacker’s face before being pointed right at Lenth.

“Hey! It’s you!” The attacker said. “Were you after this one? Sorry if I spoiled your fun. How many have you gotten? I’m now up to six. If I want to kill any more, maybe I need to grow more toes! Get it?”

“You’re beating me, then! Knives sure make it easier than smashing their heads. Like this female, here? It would have been a real pain to find a good spot to bash her head against in this cramped space, or get a good angle.”
“No. I mean you’ve killed seven, I think, not six.” Lenth spoke quietly, but tried to not let his voice betray his fear. Or was it hate? Either way, his nerves were trying their best to make him tremble. “I heard someone say you’d killed six. I can’t remember if that was before or after Eyes was found.”

Six was quiet for a moment. “Oh yeah. Eyes. But he doesn’t count; he wasn’t a Provider.” Six reached forward to smack Diane’s rear end. “Well, her problems are just as over as Eyes’. I’m going to go grab a bite. I’d ask you to come with, but I’ve taken a liking to travelling alone, you understand.” He took a moment to give Diane’s rump a little squeeze before he turned to leave. “See ya, Lenth.”

Lenth stared as Six crawled away, his looted light waving around in front of him. Six’s movements were making enough sound that Lenth barely heard a soft gasp. He turned to look at Diane. In the dark, he couldn’t make out a lot, but he saw movement, most importantly, breathing.