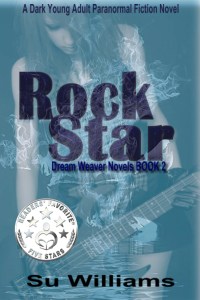 Have you ever dreamed of being a rock star? Emari Sweet has – and now she’s living the dream – the life of a rock star in an elaborate memory weave constructed by Dream Weaver, Sabre James. But her rock star world crashes around her and she returns to reality and the memories of Nick and his betrayal. Now, Nick seems to be hiding something dark and painful that torments his soul.

Thomas, the Nightmare Wraith, returns to haunt their minds and twist their dreams. Even Eddyson, Em’s trusty teddy-beagle pup can sense the Wraith’s presence. And Thomas is not alone. He’s brought a friend with him this time. Emari faces her own mortality at the hands of Sabre’s longtime nemesis bent on vengeance for the death of his beloved sister.

Immortality and magic unearth treasures and secrets that some would rather keep buried. And the biggest secret of all could destroy everything.

Dream Weaver is a dark paranormal fiction novel of mind-benders & mind-jackers for young adult, new adult and adult lovers of science fiction and fantasy romance. It’s a story of survival through the darkest of times, and just won its first award, the bronze medal in the Readers’ Favorite International Book Awards.

Rock Star, the second book in the Dream Weaver trilogy, is a paranormal fiction novel of 17 year old Emari Sweet, and Dream Weavers Nickolas Benedetti and Sabre James. They are ancient, arcane and almost immortal supernaturals, with the power to command memories and dreams. And Sabre’s got a jammin’ memory weave for Emari this time!

What Inspired You to Write Your Book?
Dream Weaver is a story inspired by authors of great books for girls and women like Richelle Mead, Stephenie Meyer, Lisa McMann and Maggie Stiefvater. I always wished I could be in a band and perform in front of a huge crowd and Rock Star gave me the opportunity to live vicariously through Emari Sweet. Research was grueling! It required that I attend multiple rock concerts, interview band members of Hell’s Belles (an all girl AC/DC cover band that totally rocks it!) and go out for drinks in a local dive bar that featured local slam poets on the mike that night. As you can see, it completely sucked. No, really I had a blast and the Belles were amazing to answer all my questions, most of which made their way into the Rock Star story.

How Did You Come up With Your Characters?
Emari’s name came about from a brainstorm session at work one day. I knew I wanted her last name to be Sweet – I had customers that had that last name and I loved it. So on break one day, I started doodling names of my main character and out of the mix came Emari (pronounced emery like the nail file). It wasn’t until later that I realized her name was simple my middle name, Marie, with the E placed at the beginning.

Book Sample
“Cuimhnigh! Cuimhnigh!” the crowd chanted. The 8150 arena was already sultry with fan sweat, and pyro and hazer smoke from the warm-up band; they were heavy into the flash and bang, shock and awe. My eyes already burned from the glycol smoke; which was actually cool, because the extra blood flow or something amped up the green of my eyes; made them more intense.
My eyes were my prominent trademark—trademark for the band; they appeared on every CD cover from the first. Rarely had I found a person with eyes as green as mine, at least not without some serious lenses. They’re emerald green, a gift from my mother, sparkling semiprecious gems. My eyes were enchanted, a magnetic spell cast on fanboys—and some girls, too—that magicked their hearts to mine.
But the eyes weren’t my only magic. Funny how being a musician has that affect on people; how they just want to be with you, to touch you, to talk to you. The charm heightens their awareness, charges every neuron in their brain and body until they do things they wouldn’t normally do, say things, give you things, give you themselves. But, I don’t generally like to take things. I’m a giver. I tried to be, mostly. You kind of have to be, to be any kind of artist. You have to give. Like giving your soul. It’s personal, intimate. You reach deep down inside and pluck out who you are and present your ‘self’, palms open. “Here I am. My heart and my soul. Take it.” And you blindly trust that they will cherish your gift, treat it tenderly and hand it back to you in one piece.
“Cuimhnigh! Cuimhnigh!” the chant thundered through the wings. In American, it sounds like ‘Come nigh’. Probably most Americans think that’s how it’s spelled too; probably think it means ‘come near.’ But in its native language, Irish, ‘cuimhnigh’ means ‘remember.’ Our subliminal plea to be held in the hearts of the masses, forever.
The roar of the crowd brought me out of my reverie and back to reality and Vail, Colorado’s 8150 Club. Show time. Kylen locked wrists with me and hauled me off the green room couch. “Time to rock, Sweets.”
“Yup. All right guys. All in.” I extended my arm in front me, palm up. Palm up to catch the blessings that rained down on us. We were a secular rock band, but we still believed we were blessed. If not, our fans surely did, and those adorations were gratefully received. Kylen placed his upturned hand on mine. Jack added his next, Drey came next and Yvy topped off the stack, palm down—to hold the blessings in. We joined the chant of the crowd, pumping our stack of hands in the midst of our circle. “Cuimhnigh! Cuimhnigh! Cuimhnigh! Let’s Rock!!!” We broke apart, revving ourselves up for the show. This was our pep rally. We’d done this before every show since the first. We were superstitious that if we didn’t, the show would be a flop. Granted, we’d definitely played a few stinkers over the last couple of years or so, but none that were complete disasters.
Jack left the green room first. He would warm up the crowd—as if they needed it; the club was virtually effervescent with this hot mob tonight; but, rumor had it, the 8150 always was. The rest of us haunted the wings on either side of the stage, absorbing the vibe that rushed the stage in raw waves. Nerves gave way to passion as Jack’s drum solo swelled with the fervor of the crowd. The throb of his bass drum thrummed in the rhythm of my heart. Lights and lasers flashed across the stage, never fully illuminating any one place, turning the venue into a surreal other world. I sucked in one last calming breath, stepped out onto the stage, and followed the glow in the dark arrows to my mike.
“Ladies and gentleman,” a light flashed on behind me, defining my silhouette at the front of the stage. “On drums, Mr. Jack Leonhardt.” A group of spot lights converged on him. The crowd cheered riotously and Jack thundered a fill. “On lead guitar, Mr. Kylen Toth.” The lights raced to the guitarist. The crazed crowd erupted as Kylen added his smooth, seductive guitar to the drums. “On rhythm guitar, Mrs. Yvy Iusi.” The roar continued as Yvy’s anointed fingers stroked the strings of her guitar. “On bass guitar, Mr. Drey Iusi.” The crowd stomped to the thump of Drey’s bass. “And I’m Emari Sweet,” the spotlight flooded me, “and we are,” I paused for dramatic effect, but the crowd beat me to it. “Cuimhnigh!”
The energy was raucous and deafening, and totally alive and thrilling. Energy so sated with devotion that there were no words to describe it, as it filled the arena, gorging every corner and spilling into the night beyond the walls. I closed my eyes and spread my arms to absorb the waves that passed over me. They were hot and sweet and violent and passionate. It was a tangible energy that washed through the room like the ocean. Like standing on the beach of some alien planet, where the waters were electric and celestial. Like nowhere else in this world or any other. And this was home. Nothing else mattered at this moment. This was my drug of choice.

About the Author:
Su Williams lives in the sometimes white/sometimes green Pacific Northwest with her husband Ben, and two of her four children, Aundraic, Jack, Josiah and Sarah. Her home is an ever changing menagerie of critters that now includes 1 cranky cat and a fuzzy kitten that her family is sure is a demon spawn from Hell, an adorable crested gecko, and a loving rescue beagle who doesn’t understand the concept of personal space, named Kooper (the Poophead). Su has been writing most of her life but only tried her hand at a novel in the last few years. Her debut novel Dream Weaver is garnering 4 & 5 star reviews on Amazon and Goodreads, and topping lists on several Listopia lists. And Dream Weaver recently won the bronze medal in the Readers’ Favorite International Book Awards. Her second novel, Rock Star was released in January 2014 and holds a 5 Star rating on Amazon and Readers’ Favorite, and also holds top spots on several Listopia lists. The final book in the series, Breaking Normal was released in August of 2014. Upcoming work from Miss Williams include Devo: A Devolution Zombie Story (due out in early 2015), and a dark paranormal/sci-fi/fantasy anthology with writers from around the world currently available on Amazon and CreateSpace.