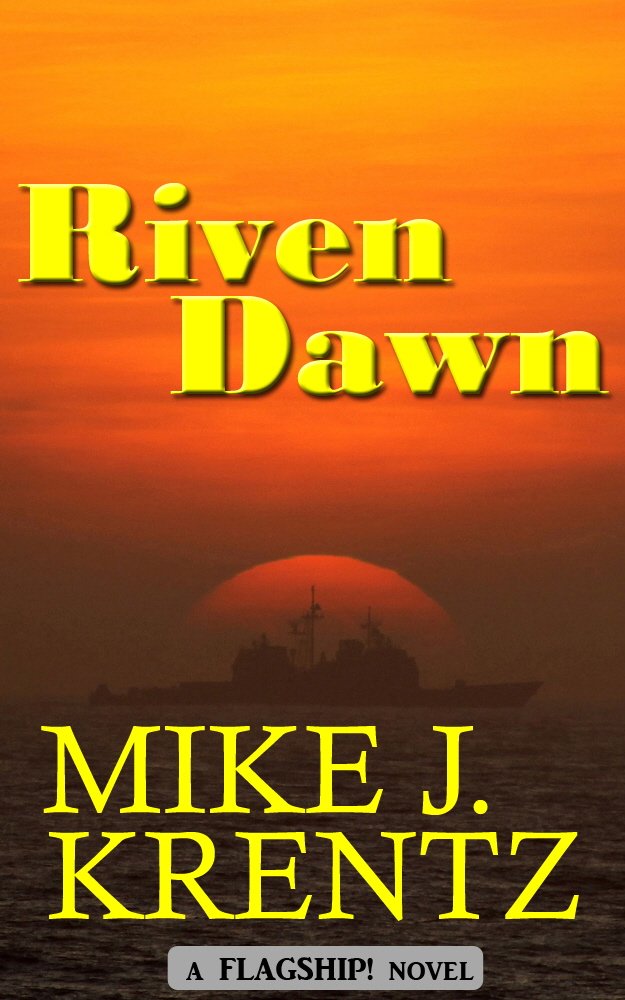 A senior naval aviator/single mother at the pinnacle of her career deploys in a Navy flagship as director of operations for the U.S. 7th Fleet, where she confronts a cross-fire of military and personal challenges. A conniving superior seeks to discredit her, while an enigmatic yet alluring colleague cycles between nemesis and confidante.

As she struggles to defuse escalating military tension in the western Pacific, her rebellious teenage son — beguiled by a mysterious Internet predator — acts out and forces her to re-evaluate life choices and to face down personal demons from her past. As her self-assurance crumbles, she confronts and overcomes her own history of an abusive childhood and toxic marriage. When the unexpected specter of her destroyed marriage threatens to take her son, she brings to bear her aviator instincts and combat-honed courage in a desperate battle far more dangerous than a shooting war.

What Inspired You to Write Your Book?
During the course of my career as a Navy physician, I met many courageous men and women whose stories I wanted to portray.

Behind the scenes of any international military confrontation, a dedicated team of warfighters labors around the clock to support the operational commander’s mission. These men and women come from all walks of life and professions — career warriors, logisticians, engineers, information systems experts, doctors, lawyers, chaplains, public affairs officers; brand new sailors, mid-career hopefuls, and seasoned veterans. Their stories seldom appear in national media. They don’t carry weapons. They don’t sail the ships, fly the airplanes, drop the bombs, or storm the beaches. Look for them behind desks and computers aboard the most sophisticated floating command and control platform in the world, the fleet flagship. Armed with a myriad of complex and redundant technologies, these modern warriors bring to bear their collective training, knowledge, and expertise to inform the fleet commander’s critical decisions — high stakes judgments that must either avert war altogether, or guarantee victory if the shooting does start.

The committed men and women on a fleet commander’s staff work in a harsh and stressful environment, separated from families, loved ones, and comforts of home. Like all who travel the road of the human condition, each one has a unique story — of joy and pain, love and disappointed love, hopes and fears, triumph and tragedy. Amid the realities of war and threat of war, their human stories become all the more provocative and inspirational. The fictional FLAGSHIP! series is about those stories.

How Did You Come up With Your Characters?
I chose strong women for the protagonists in my FLAGSHIP! Series because I have met and admired a number of outstanding female Navy officers in my career, many of whom have faced additional challenges in their road to success. Their honor, courage and commitment are true inspirations.

Get the damned knife!

Kate burst into the kitchen and yanked out the drawer. The contents clattered onto the floor. Her right cheek throbbed in pain with each hammering heartbeat. One eye had swollen shut; the other spotted a carving knife.

Patrick screamed from upstairs, a frightened keen she’d never heard in his one year of life. From the baby’s bedroom, Dean’s slurred voice shouted. “Shut the fuck up!” Patrick’s terrified shrieks pierced her mind and heart.

Kate clenched the knife and sprinted up the stairs.

Sprawled across the threadbare carpet runner on the hallway floor, Major Dean Winslow, USMC, revived to the stench of his vomit. His groin ached where Kate had planted her knee. A painful lump blossomed on his left temple. He lifted his face from the stinking goo; blistering pressure steamed inside his head. He tried to get up, but a sudden catch in his chest seized his breath and forced him back to the floor.

After a few minutes, the pain eased. Dean struggled into a sitting position. Cradling his throbbing head between his hands, he looked around, his vision a blurry fog. The door to Patrick’s bedroom was ajar.

Fighting the agony, he stood himself up. He braced against the wall and made three faltering steps to the door. Breathing became easier if he pressed his left arm against his chest, but the blurred vision and the pressure cooker inside his head worsened by the second. He wanted to rush through the door in full attack, but he could not move that fast. His numb hand swatted the wood, making no sound. Then he leaned against the frame and kicked at the door.

“Come out of there, bitch.” Silence. He kicked again. “You got no right.” He panted for breath between each word. “You got no fucking right.” No sound from within. He forced himself up and stumbled into the room. No Patrick. No Kate.

Pressing both hands to his head against the ballooning pressure, he slumped to the floor into a fetal position. Then he spotted the knife under the crib. He reached for it, but a sharp crack in his chest stopped him short. His vision narrowed, as if seeing a fading light through a long tunnel.
“You got no right,” he moaned as all went gray.

About the Author:
Drawing on a 20-year career as a Navy physician, Mike J. Krentz writes military thrillers with a distinct human flavor. From real-life immersion with courageous yet sometimes flawed warriors in ships, air wings, and fleets deployed around the world, he portrays the personal and professional dramas that challenge military men and women — conflicts often more provocative than combat action. His last assignment as 7th Fleet Surgeon on board the flagship, USS BLUE RIDGE, became the inspiration for the FLAGSHIP! Series. The trilogy includes RIVEN DAWN, SOUTH CHINA SUNDOWN, and RISING SUN…MORNING STORM.

Mike holds a classical degree in English from the University of San Francisco, a Doctor of Medicine degree from the Medical College of Wisconsin, and a Master of Public Health Degree from Johns Hopkins University.

Mike lives in Norfolk, VA with his wife and son. When not writing, he works as a public health consultant. He enjoys fine cuisine, wine and single malt scotch, and actively participates in running and bicycling.