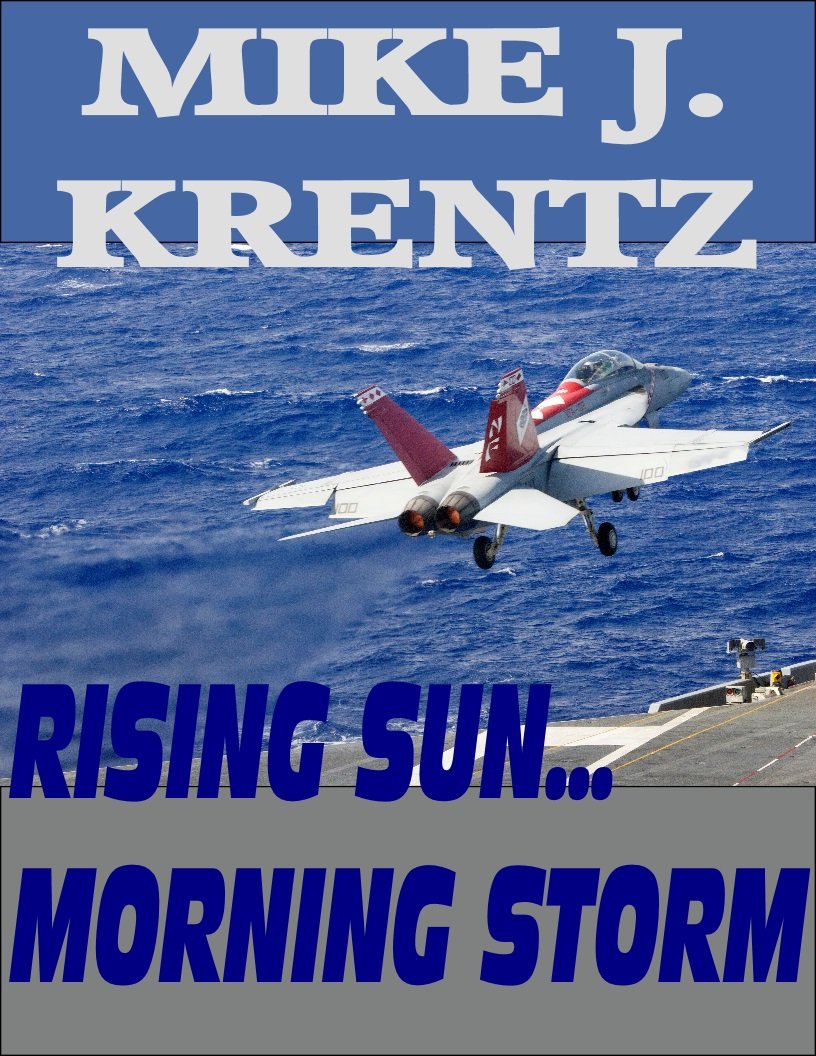 In the third book of the FLAGSHIP! Series, the fleet staff hurries from Japan (“Land of the Rising Sun), to Korea (“Land of Morning Calm”) to face down dual threats from the vicious North Korean regime. Terrorist action against the South deters Captain Kate Mahoney’s efforts to locate and rescue Lieutenant Commander Cricket Squire after her aircraft was shot down over hostile seas. At the same time, Kate faces renewed threats to her life and career over a past relationship that continues to haunt her. Armed with the personal courage and endurance that came to fore in the prior novels, and drawing on assistance from unexpected quarters, the intrepid fleet warriors fly into the very faces of danger — risking all in a series of daring combat and personal sorties that will remake their lives in one way or another.

What Inspired You to Write Your Book?
Drawing on my 20-year career as a Navy physician, I write military thrillers with a distinct human flavor. From real-life immersion with courageous yet sometimes flawed warriors in ships, air wings, and fleets deployed around the world, I portray the personal and professional dramas that challenge military men and women — conflicts often more provocative than combat action. My last assignment as 7th Fleet Surgeon on board the flagship, USS BLUE RIDGE, became the inspiration for the FLAGSHIP! Series. The trilogy includes RIVEN DAWN, SOUTH CHINA SUNDOWN, and RISING SUN…MORNING STORM.

How Did You Come up With Your Characters?
I chose strong women for the protagonists in my FLAGSHIP! Series because I have met and admired a number of outstanding female Navy officers in my career, many of whom have faced additional challenges in their road to success. Their honor, courage and commitment are true inspirations.
In this book I also introduced Lieutenant Troy Pearson, a young, highly competent Navy doctor who will play larger roles in future books in the series.

Dr. Troy Pearson, Lieutenant, Medical Corps, United States Navy, swaggered through the front doors of his clinic. His skin glistened from a vigorous morning workout, even though he’d cooled down and showered before strolling up the short hill from the naval base gym. His muscles tingled from heavy iron lifts, and he looked forward to his usual breakfast of fruit, microwavable oatmeal and yogurt before the first appointment of the day. Troy relished his job, medical officer in charge at a sleepy U.S. Navy base adjoining the vast Republic of Korea (ROK) Navy base just outside the quaint town of Chinhae, a suburb of Busan, South Korea. Where else in the Navy could a lieutenant fresh from family practice residency run his own medical practice? He pitied his former residency classmates now working as peons at their stateside Navy hospitals, answering to the beck and call of senior physicians, and – worse – Navy nurses. There were no nurses at the branch health clinic in Chinhae, just Troy and a handful of cherished hospital corpsmen, and Mrs. Moon, the South Korean clinic manager and confidante to the succession of young Navy doctors who took one-year orders to this “remote” post. Just six months into his own tour, Lieutenant Pearson had requested a one-year extension on his orders. He wanted another year in charge of this low volume, low acuity medical practice that also offered unfettered access to the robust South Korean night life — one fabulous playground for a handsome single American doctor.

Just inside the clinic door, Mrs. Moon intercepted him. Fear distorted her usually placid face. “You are needed right away in main treatment room,” she said in a tense voice. Without waiting for his reaction, she turned and led him down the short hallway.

Troy dumped his gym bag at the door and entered the treatment room. A distraught mother, whom Troy recognized as one of the Navy spouses on base, clutched the hand of a child who appeared about six years old, lying very still on a stretcher. Two hospital corpsmen fretted over the patient. Dr. Pearson did not need a wealth of medical training to see that the child was very ill. He spoke to the senior corpsman. “What?”

The mother looked up, recognized him, and answered. “He’s so weak, Doctor. He choked on a glass of orange juice. Now he can’t even sit up in bed.” Troy glanced at the corpsmen. Their worried expressions mirrored that of Mrs. Moon and the mother. An aura of fear permeated the room, and Troy had to steel himself not to succumb. He thought about his emergency department rotation while a resident at the Camp Pendleton Naval Hospital. “Take your own pulse first,” the ED attending had told him. He took a breath and moved to the boy, tried to engage him with a smile. He got a weak grimace in return, in which he noted that both eyelids drooped at half-mast. Using both hands, he raised the lids to full open. The child’s pupils pointed in different directions. “Diplopia,” Troy said.

Troy placed a wooden tongue blade in the young boy’s mouth, and the child did not resist. The tongue and mucus membranes appeared dry. He touched the soft palate with the tip of the blade, stimulating only a weak gag in return. He looked at the mother. “Does he talk okay?”
“No, sir,” she said. “He sounds drunk.”

When he tried to get the child to squeeze his hand, the boy could not grip, just flex his fingers a little. Troy moved each of the child’s arms and legs through normal range of motion, but it felt like trying to make a well-used rope stiff again. “Flaccid paralysis,” he muttered.
The mother gasped. “Paralyzed? Is he paralyzed? It can’t be polio. He’s had all his shots.”

Troy wished he could remember the woman’s name. He touched her shoulder. “He’s not completely paralyzed, and it’s not polio. Could be a number of things. We can’t do much here, so we need to transfer him to a Korean hospital in Busan.” He worked at keeping his voice calm as he turned to Mrs. Moon. “Call St. Mary’s Medical Center now and tell them we’re transferring a child with bulbar palsy of undetermined etiology. I’ll want to talk to their ER doc myself.” As Mrs. Moon scurried off, Troy addressed the younger of the two corpsmen, a female on her first tour in the Navy. “Get the ambo warmed up. I will ride along with the patient.” As the young corpsman started to hurry out, he called to her. “First bring in the crash cart, just in case.” The young lady stopped at the door, her face ashen. “Now, please,” Troy said.

Noting the tension, the mother moved closer to hug her son. Troy touched her arm to get her attention. “I need to ask you some questions, Mrs.—”
“Mattox. My husband is Lieutenant Commander George Mattox. This is Georgie.”

“I know George,” Troy said. Most permanent personnel on the small base did know each other. They resided in an American enclave in suburban South Korea, much like living in a small rural town in America.

Troy kept one eye on Georgie while he talked to the mother. “When did this start?”

“I think a few days ago. He said he felt weak and tired. This morning he couldn’t get out of bed.”

“Have you been anywhere unusual around Korea or elsewhere?”

“No, sir. We went into town for dinner a few nights ago.”

“That Korean barbecue place on the main drag. We’ve been there many times.” Troy recognized the restaurant as a frequent haunt of Americans from the Chinhae base.

“Anyone else sick at home?”

The female corpsman appeared at the door, without the crash cart. Her face had turned from ashen gray to pallid white. “Sir, we just got another patient, a girl with the same symptoms.”

“Put her in the next room. I’ll be right there.”

As the new patient and her mother passed the main treatment room, the women recognized each other. The new arrival spoke first. “June? What are you doing here?”

Troy intervened and addressed the newly arrived mom. “How old is Melissa?”

“Six. She and Georgie attend first grade together.”

The alarms in Troy’s head burst into full cacophony. He grabbed the senior corpsman. “Get Melissa into a bed right away so I can examine her.” He addressed the female corpsman. “Keep an eye on Georgie. Call me if anything changes.”

It took him only a minute to confirm his suspicions. Melissa also had signs of brain stem dysfunction and advanced flaccid paralysis. He issued similar orders on her, and asked Mrs. Moon to tell the Busan hospital to expect two transfer patients. Returning to the main treatment room, he heard the front door open. He turned to see another distraught young mother, carrying a young boy in her arms. “First grader?” Troy asked.
The mother nodded, confusion overtaking distress. “He can’t walk.”

Troy had no more treatment rooms, so he pointed to a chair in the waiting area. “I’ll be right with you.”

He went to the front desk and spoke to Mrs. Moon in a quiet yet firm voice. “Call the base commander. Tell him I can’t get away from my patients right now, but I need him to trust me. He must close the base school. Now. No students or teachers should enter that place until I figure out what’s happening.” Troy started back to the mother and child in the waiting area.

About the Author:
Mike J. Krentz draws on a 20-year career as a Navy physician to write military thrillers. From real-life immersion with courageous yet sometimes flawed warriors in ships, air wings, and fleets deployed around the world, he portrays the human dramas that challenge military men and women — conflicts often more provocative than combat action. His last assignment as 7th Fleet Surgeon on board the flagship, USS BLUE RIDGE, became the inspiration for the FLAGSHIP! Series. The trilogy includes RIVEN DAWN, SOUTH CHINA SUNDOWN, and RISING SUN…MORNING STORM.
Mike holds a classical degree in English from the University of San Francisco, a Doctor of Medicine degree from the Medical College of Wisconsin, and a Master of Public Health Degree from Johns Hopkins University.