You are here: Home / Bargains and Freebies / Bargain Books Under $3 / Revision 7: DNA by Terry Persun @tpersun 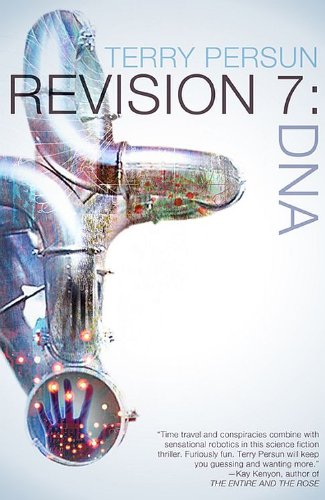 Time traveling robots, a walking medical experiment turned detective genius, and a kidnapped psychic combine in a story that will tear at your heart and get your adrenaline pumping.

When it comes to investigating missing objects, Neil Altman stands out. After all, his parents severed the two halves of his brain when he was a child and then trained him to use each half independently. The problem is that he doesn’t believe in time machines, so Dr. Eric Steffenbraun’s project, stolen or not, already sounds far-fetched.

Video is hard to deny, but Neil isn’t sure if the beings coming through the time machine are humans with masks or illegal humanoid robots. Besides, Dr. Steffenbraun could have faked the video if he feared the project was about to be cancelled.

Neil’s wife, Mavra, is a well-known psychic in the area, and believes that Neil could be in danger. Knowing how she can get involved even when asked not to, he includes her in on the investigation. His plan is to keep her out of harm’s way. That is until she’s kidnapped.

Miles away from Neil and the time machine, Fenny is trained to think on his own. He’s a utility robot with little understanding of what’s going on around him except what Dr. Smedley Klein has taught him-for now. Things are about to change for Fenny once Revision 7 is installed.

About the Author:
Terry Persun is a Five-Time Award-Winning novelist, an Amazon bestseller, and a Pushcart nominee. His science fiction short stories have been widely published, and his dystopian novel, “Cathedral of Dreams” was a ForeWord magazine Book of the Year finalist.
After working as an engineer, Terry shifted into editing for high-tech journals, and continues to use technology as the basis of some of his science fiction. He writes in many genres including mainstream fiction, historical fiction, science fiction, fantasy, and poetry. For videos, short stories, and other information go to: TerryPersun.com