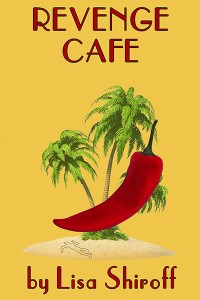 Mandy Breen is a recently unemployed crime reporter with a refined palate and an addiction to therapy. After losing her job and totaling her car (again) she feels she has nothing left to lose when her old friend Chance offers her part-ownership of his restaurant on St. Thomas in the U.S. Virgin Islands. She accepts the offer, intent on moving to paradise and starting a new chapter in her life.

Shortly after landing on island, she finds Chance’s murdered body in the restaurant’s freezer and worries that his death was her fault. Topping the list of suspects are an old boyfriend and a former VI-PD police lieutenant who attained that “former” status due to Mandy’s reporter handiwork. However, as she sorts through the few leads she can find, she discovers Chance had been dabbling in a variety of activities that may or may not have been legal, and that may or may not have put her at the top of the list as the next victim.

While compelled to find the murderer, Mandy must also juggle the responsibilities of running the restaurant and planning a memorial, both of which she is ill-equipped to do, particularly while lacking the couch of a good shrink. However, she is surrounded by people who seem like they can help: a transplanted restaurant general manager, an Islander who is possibly an attorney, a sexy detective with the VI-PD, and a housemaid and witch doctor (or so they say). With them by her side and sometimes stumbling at her feet, she struggles to follow through on her responsibilities all the while wondering if she’ll live long enough to see their completion.

What Inspired You to Write Your Book?
This is almost embarrassing — back in 2000, I had received a gift in the mail that was wrapped in newspaper. It was a holiday ornament. In subsequent years, each time I pulled out that ornament to hang on a Christmas tree, I’d unwrap it and re-wrap it form that same newspaper. Keep that in mind and let me fast-forward a decade or so . . .

Many years later, while researching and planning a trip to St. Thomas, I was inspired by the culture (and the driving there) to write a book. Anyone who has ever commanded a motor vehicle on that island knows the craziness I describe in the book is pretty accurate. I cannot drive there. I suffer a mild form of amaxophobia (fear of being in a car), so my husband does most of the driving and he did ALL of it on St. Thomas. I couldn’t help but laugh at myself and several times, while on island, I joked with him that he should be grateful he’s driving because the right side of my car at home as many “mysterious” scratches and small dents so could he imagine what it would look like if we lived there? The idea brought the character Mandy to me while was relaxing on the beach with a drink in my hand while I was still on island.

Back at home, while mulling over Mandy’s story, I couldn’t quite figure out what the perfect murder weapon would be that would fit the quirkiness of the book. Until the day came when pulled out our holiday ornaments. I smoothed out that newspaper and for some reason, for the very first time, I actually looked at what was printed on it. There was a Garfield cartoon (by Jim Davis) where Garfield and his owner Jon are having a pepper eating contest. Jon wins after Garfield eats a Peruvian Death Pepper.

How Did You Come up With Your Characters?
My characters just “come” to me. I’m not sure how but I often know why, or at least what triggered them. I love to people watch and eavesdrop on conversations when I’m in a public place. Yes, I’m aware that that could be considered nosy, but I’m not intrusive nor am I judgmental. I just like to see how people behave and I often wonder what makes them tick.

Sometimes my mind will kind of get stuck on something I see and I’ll start asking questions about it. Why did they think they needed to carry an umbrella that day when there as no chance of rain? What would cause a person to risk life and limb to change lanes on the highway so quickly to take an exit off? Does that other person think magenta is a neutral color? Those kinds of questions will just pop into my head.

Eventually, when I’m doing something that take a little mindfulness but not much (cleaning, cooking, drinking on the beach) those questions will make a character come to me with their own answers and even more information about them.

Mandy was inspired, as I mentioned in the previous question, by my own fear of driving and also by a very pretty blond woman I met on a different island who was a TV reporter and joked that her dream job was being a bar owner in the tropics. Ginger, another character in Revenge Café, was inspired after overhearing a woman in an airport tell someone that the best thing about being divorced with grown children was that she could finally live just for herself and live wherever she wanted. I wondered what that would feel like and where would someone want to go?