You are here: Home / Faith and Religion / Christian Fiction / Remembering Will by Jim Yackel 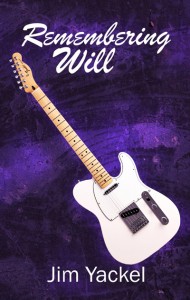 Memory is pain, but there are some things he’ll never forget…

At thirty-nine years of age, Will Gailey is an “over the hill” singer-songwriter who leads a rock band that the music business doesn’t consider to have the “now” sound. A trauma has rocked his world, and as a result his memory of events has been severely affected. Will can remember the lyrics and chord changes to his songs, but there are other things that seemingly he’s forgotten. Will has always enjoyed fishing, but even that relaxing activity has become a source of frustration. He’s become angry and disassociated, and has turned from the one thing that could bring him peace and healing. And where that one thing is concerned, that’s where his anger and the blame for his physical and spiritual pain are errantly directed. In his mind, that one thing is the cause for his loss and his suffering.

Months after the trauma, Will continues to suffer crushing headaches. He decides to take matters into his own hands as what is supposed to heal his anguish is only exacerbating it. He’s become weakened, vulnerable, and open to spiritual torment. He’s alone and in need of help, but when people come into his life that can be of assistance he’s apt to reject them. Vivid dreams, visions, and hallucinations occur, and in them are both the help he needs and likewise persecution. Will was a strong man, but now there’s a strong man that’s found a breach and is creating havoc in his life. Will remembers how to defeat the strong man, but it seems that he’s chosen to forget.

Will has changed, but band mates and friends remember how he “used to be.” Can he be the way he used to be again?

What Inspired You to Write Your Book?
I have to admit that the inspiration for Remembering Will came out of the blue. My previous works have all been related to the biblical end of days, but as I was driving on snow-covered roads in the record-breaking cold of February 2015, I thought of warm weather and fishing. Then, as a musician myself, I began to think about struggling musicians that would be considered over the hill by music business standards. The two themes of music and fishing merged together in my mind. From that, I thought of a character named Will who is a musician that enjoys fishing. His troubles and torments grew out of that as I drove, and the ideas of trauma and memory loss came from there. I thought about pain and medication and likewise the loss of faith and hope. This poor guy Will, what would happen to him? What would cause his physical pain and spiritual and mental torments? I had to get home and start writing! I have to admit that the story ripped me up as I began to put it together.

How Did You Come up With Your Characters?
Will Gailey is an amalgam of people that I’ve known; I don’t know how else to describe him. As I indicated above, he hit me out of the blue as I was driving. For me, he is one hundred percent relate-able. I can feel his distress, his frustration, and his torment. He enjoys the same things that I do. Mr. Jones is a character that is multi-dimensional so to speak. He’s real in this dimension, and likewise he’s a supernatural manifestation of deep-rooted fear and craving. He’s basic and transparent, and at the same time an absolute mystery. Yvette is again an amalgam and somebody that popped into my head. I don’t want to mention anything else here for concern of spoilers!

Book Sample
A loud crack echoed inside the walls of his skull. “Ugh…Babe Ruth just hit the ‘called shot’” he moaned as his head felt like the curveball lobbed by pitcher Charlie Root. Reflexively, his hands went to his head and the rear treble hook of the Jitterbug became impaled in the flap of his right ear. He didn’t feel the sting of the hook as the Sultan of Swat jogged toward first base while Chicago Cubs fans heckled from the stands, shouting “pain pill Will – pain pill Will – pain pill Will!”

As Ruth rounded first, the Jumbotron above the centerfield stands flashed a headshot of a baggy-eyed Will sporting a bloodstained white baseball cap bearing the False Walrus logo – which was the empty black suit associated with the hacktivist group Anonymous. But, what differentiated the band’s logo from that of the hackers was that the suit was worn by a grey cartoonish walrus. Below Will’s image was the band’s logo again, and to the right of that was PAIN PILL WILL where a player’s name would normally be. On the top left of the Jumbotron was listed 5 GAILEY Rx for his jersey number, name, and position. Below that, where the stats would be listed, was a series of zeros. In the Player Notes section was the message “#5 got so messed up without his 325 mg/5 mg that he missed Friday’s gig and blew a major opportunity.” Below the Jumbotron was the scoreboard, and through eight innings it showed Headaches 181, Will 0.

He was about to tell the chanting bench jockeys to shut up, but before he could rasp the words vomit spilled onto his shirt. Undaunted and yet desperate, he sat down on the muddy bank and with dexterity that would belie his condition he untied his work boots and pulled them off with his socks following in rapid succession. “I’ve gotta get my meds back because there were no Jumbotrons back then” he slurred as he waded into the canal and his feet settled into the ooze on the bottom.

Buy Remembering Will On Amazon