You are here: Home / Fiction / Science Fiction / Reason for Existence by Richard Botelho 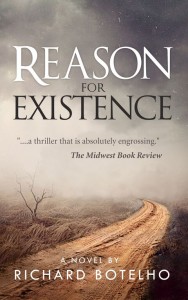 When David Jordan, an extraterrestrial human in appearance, agrees to help U.N. Secretary General Nicholas Straka resolve an escalating nuclear crisis, he also learns he must defuse a horrifying plot to exterminate humanity by a hostile race of beings who despise human culture. Somehow, he must thwart both crises before a worldwide intervention is launched by his superiors, destroying human innocence in the process. In Reason for Existence, David learns the origins of human conflict, the nature of secret societies, the true meaning of friendship, and the enduring qualities of love.

What Inspired You to Write Your Book?
Reason for Existence is a genre bender combining elements of science fiction, philosophy, thriller, and romance. I wrote the novel in contradistinction to typical genre fiction because such works can often seem formulaic. I like innovative and original fiction. This novel is also a book that makes you think. I believe that the purpose of a novel is to inspire thinking, not merely to be a form of entertainment.

How Did You Come up With Your Characters?
Most of the characters are composites based on people I have known, except for the protagonist, who is an extraterrestrial. He was completely from my imagination. The secondary characters are thus perhaps more common and familiar. Since some of the subject matter of the book examines human duality, many of the characters have good and bad aspects of their personalities.

Book Sample
Truth is found in the hills. Mine are in California, in the coast ridges of Oakland, towering high above San Francisco Bay, yielding golden secrets in the sunlight like a peek into my eyes. Neither of us is what we seem. Like these hills I am a mystery. Still, there are lessons to be learned among the shadow breaks and drooping mists, for I feel it in my soul. Locals tell stories of finding passion and even love in these majestic wooded rises, but that seems as elusive to me as the occasional coyote seen yipping in my yard. Even the forest trails here are a riddle; many of the footpaths meander aimlessly and I have yet to find a satisfactory explanation for their bewildering arrangement and excursive convolution and seldom is there any reason for what happens here or why the grandest answers always come with pain.
I have sought meaning all my life. No, not for me, rather to understand the people of this Earth, the mothers and fathers and sons and daughters who have proceeded from generation to generation in search of their destiny, who have surmounted so much and who surmount so much to this very day. It is impossible to live among the people and not feel some affinity for their struggles. But it is equally impossible to ignore contempt for their darkest hours. I have seen their hearts break while burying their precious ones in the ground, yet I have seen them make war on each other and drop fire from the sky. I have seen babies burned and women raped and families slaughtered to no avail, yet I have seen the tender times of lovers and the charity of the poor. I have seen the sallow, disbelieving faces of an ethnic cleansing stumble forth from camps of living hell and I have seen courts of justice hold the wicked to account. I have seen men and women of supposed reason deny their hands across the aisle while the innocents they serve pray their gods to grant wisdom to the wise. I have seen folly. I have seen lies. I have most certainly seen evil. But I have also seen humanitarians sacrifice their lives for a principle truest to their soul or politicians dedicate themselves in service for an ideal they admire. I have seen hope lost and hope gained and I have witnessed the tearful pleas for higher natures and the will to start again anew. The people of this land are a strange people, yet they possess a perseverance all their own, a perseverance like the hills themselves, unflagging and contrary to the evidence clearly in plain view. Humans disappoint as much as they inspire and they fail as much as they succeed. Still, something propels them forward, something I’ve never quite understood about the people living here. So in lockstep with the hills that are my home, my curiosity grows through the years as I observe the world below in nightly glow and daily ponder the human way.