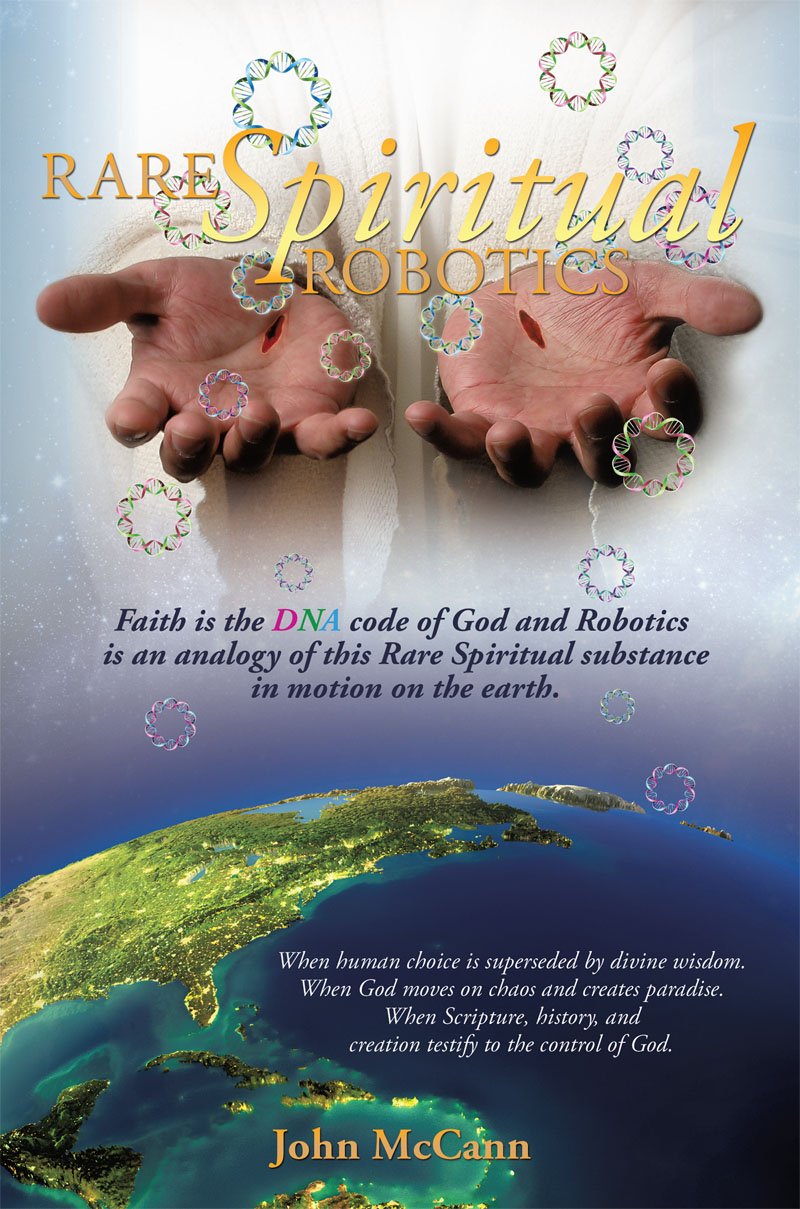 What Inspired You to Write Your Book?
In 2011 I completed a theological study program and was planning on continuing at another school. Meanwhile, I started writing. First came the fictional anecdote “The Brazilian Church” in Chapter eight. Next, I wrote my personal testimony in Chapter nine for family and friends. Then, I jotted down my theological views to a pastor of a church I was visiting. If the pastor said, “John, you would not be happy here, we believe differently,” I was ahead of the curve. I am a five-point Calvinist. Also, I believe in conditional immortality (annihilation of the unsaved) and the administration of all the gifts of Holy Spirit for the church today. I am sensitive to the consciences of others who believe differently, while making a sincere attempt to interpret Scripture.

A statement that bothered me was, “God does not make robots.” This statement placed limitations on the creative ability and the sovereign control of the Lord (see Ps. 115:3). My disagreement was to be short, but I discovered a mark that I could aim at. The mark was “Christian perfection” as John Wesley taught.

The book took about two and a half years to write. I feel comfortable and content that I completed the task the Lord gave me in writing this book.

How Did You Come up With Your Characters?
Characters are from the Bible and personal encounters. Some story illustrations use fictitious names as characters.

Book Sample
An analogy is an object used to represent another object for the purpose of illustration, contrast and teaching. It is not an exact representation. Contemporary analogies are used in sermons and writings to help people understand Scripture. A robot is a contemporary analogy. Similar to the Potter and clay analogy, a robot illustrates the control of God over His creation. Would man make a robot he could not control? Would God make a man He could not control? Some say, “Yes.” I say “No” based upon Scripture (see Rom. 9:21; Heb. 10:14-17). If man can control a robot, truly God can do the same with man.

The reasons for the robot analogy are:
1) The Designer knows how every part of the robot works.
2) The robot analogy isolates the importance of doing the will of the Lord.
3) The robot analogy illustrates control from a separate Power.
4) A robot is totally obedient, similar to a perfect Christian.
5) A robot must be programmed, similar to infused faith and a renewed mind.
6) A robot does commands. A Christian does commandments.
7) A robot does not expect praise for his actions because he does what is expected.
8) A robot does not compare itself to other robots because that would be unwise.
9) A robot must be controlled in order to accomplish meaningful tasks.
10) A robot is a creation. A Christian is a new creation.

The primary reason against the robot analogy is based upon man using his intellect and will or choosing what to do. However, this is limited to the borders of the natural world. And man is more complex than a robot. Man has a soul where decisions can be made. This can be sin when the mark is missed (see Jam. 5:17). When Holy Spirit is leading, man does not sin (see Rom. 8:2; Gal 5:16-18). The robot analogy is about the nature of God controlling the heart of man.

The robot analogy illustrates a vessel unable to do anything without a connection. There is a long list of connections in the Spiritual and physical realm that are beyond man’s control (see Ps. 2:3). Only the Designer knows where all fit and how they operate. The Bible identifies the connections. There is a connection that allows the Spirit to come upon a person in the Old Testament and the Spirit to be within a person in the New Testament that empowers the person to do the will of the Lord. Holy Spirit will glorify Jesus and the individual will have issues with recognition when he knows that Jesus did it. The flesh is about works of self-gratification, while the world operates from the consciousness of man, which can do both good and evil in the natural realm, but is not connected to the Spiritual.

Meanwhile, the Devil deceives on one end and destroys on the other. Jesus is superior to these and has come to give life and life more abundantly. There are two categories, unsaved and saved, that virtually all people fall within. Within these two categories are subcategories. The percentages are speculation based upon Scripture and observation.

These people have a conscience and act according to reason. They have the capacity to do good in the natural realm. They can repent and sustain an earthly culture. They create various religions to satisfy their consciences and sustain order. However, they do not understand Spiritual principles. The god of this world may also deceive them, but not totally control them. Natural people will be judged according to their words and deeds.
Robots of the Flesh (1%)

Robots of the flesh are without self-control (see II Tim. 3:3). Their behavior is dictated by the five senses of sight, hearing, touch, smell and taste. Natural people can become robots of the flesh due to a lack of intervention from God for an extended amount of time. Sodom and Gomorrah had no remembrance of the judgment of God and became totally corrupt (see Gen. 19; Jude 1:7). When the entire culture becomes robots of the flesh, the culture is unsustainable within the design of creation and ceases to exist.

These people are totally controlled by the god of this world. Judas Iscariot and the anti-Christ fall into this subcategory. Consider the past ruler of Tyre and the fall of Satan as describing the same person (see Ezek. 28). It is interesting how some Christians believe that a person can be totally controlled by Satan2, but not totally controlled by Jesus. Christians acknowledge the sovereignty of God to destroy man, but question the sovereignty of God to fix man. Robots of Satan can have a short life (see Matt. 27:5; John 10:10). Schizophrenia, diagnosed as a splitting of mental functions, could be a period of control by Satan. At judgment day, the robots of Satan would have been better to never been born.

Christians are a work in process. A Christian can vacillate to and from a robot of Jesus through discipleship (putting to death the flesh and putting on the Lord Jesus Christ). When you put on the Lord Jesus Christ, you are in a position to hear and obey a command from the Lord, similar to a robot (see Rom. 10:14). Christians can choose to be a disciple, but Christians cannot choose to be a robot of Jesus because Jesus controls the Spiritual realm and He must issue a command (see Acts 8:29, 9:10-16). Meanwhile, the Scriptures testify to being perfect and mature, which is the goal. Perfect and mature Christians act in total obedience to God, but proper interpretation is necessary for Spiritual mindedness. Christians will be rewarded in heaven based upon their obedience and sacrifice.

Having a Creator who is not involved in time is like having a Creator not involved in creation. During the course of time, the Spirit of God has controlled from heaven a few individuals in order to accomplish His purpose. This is rare, perhaps for just a second of time. The Lord took total control in order to avoid any human failure. This is not seen in Adam and Eve, however Noah was later activated to build an ark (see Gen. 6:22). Still later, Jesus activated some fishermen to follow Him. Activation is not contingent upon any type of human yielding, choosing, cooperation, surrendering, repentance, humbling, worship, praise, virtue or any other human initiative or condition. In heaven, these people will cast their crowns back to Jesus because they realize He did it (see Rev. 4:10). Activation is the ability of the Creator to issue a command to His creation, whether to stop a storm, to speak through a donkey, to feed a prophet using a raven or to stand a man on his feet (see Acts 14:10). Looking at the acts of Adam and Eve (and later Cain and Abel) a case could be made for freedom of will. This is where a broad stroke of freedom can be incorrectly painted that God has given man free will and God will not interfere with man’s right to choose. However, God took the acts of Adam, Eve and Cain into account and pronounced judgment. This pattern repeats throughout history. At other times God intervened, such as the tower of Babel, where He confused the tongues (see Gen. 11:9). This is an act by God upon His creation to obtain His purpose without any ability of man to stop, resist, change or avoid. It is like a signal from heaven to do a command, such as speak a different language, similar to a programmer loading new software into a robot. Although the confusion of tongues at the tower of Babel was an act on the consciousness of man, not the Spirit, the principle of activation still applies. The results are absolute. The most familiar act is Spiritual salvation when God installs faith and seals the individual’s heart with Holy Spirit.
The glory of God is a realization that a marvelous work has occurred that only God was able to accomplish (see Dan. 3:25-28). The Lord actively took control. The activation may be immediate or delayed based upon the discretion of the Lord. This is observed in Enoch, when “God took him” and when the disciples left their fishing nets and immediately followed Jesus (see Gen. 5:24; Matt. 5:20). Meanwhile, a brief delay is seen in the call of Moses to return to Egypt (see Exod. 4). A longer delay is seen in the call of the prophet Jonah to preach to the Gentile nation of Assyria (see Jonah). The Lord activates as He wills, sometimes immediately, sometimes with delays. The timing is always perfect to match His nature and the targeted human personality. Therefore, we do not have a death certificate for Enoch. The disciples became fishers of men. Moses went to Egypt and Jonah preached in Assyria. The Lord controls people without force to accomplish His will, even Spiritual salvation (see Eph. 1).

About the Author:
John McCann was born in Augusta, Georgia. When he was nine years old, he chipped his front teeth. The teeth became an awful overbite that prevented a social life. His first kiss nearly cut the young lady’s lip. When John would speak, people would hold their hand over their mouth. His father died at an early age and his mother was financially unable to have John’s overbite corrected. John escaped his embarrassment with alcohol until he realized that God had a plan for his life. John worked as a computer programmer while dedicating his life to studying the Word. He earned a Th.D. from Christian Life School of Theology. His book, Rare Spiritual Robotics, is a compilation of his studies that reveal the sovereignty of God and the misapplications within contemporary Christianity.