You are here: Home / Fiction / Mystery/Suspense / Radioactive by Lloyd Vancil 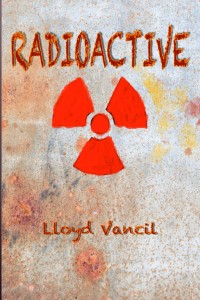 Disaster strikes when LAPD Detective Sergeant Mitchell Foster’s orders lead to fatal consequences for his family. Foster is haunted by his past and nearly destroyed by this new grief but he must pull himself together when a terrorist raid on a nuclear storage facility puts law enforcement officials across the country on alert, Detective Foster is drawn into the investigation of a home grown terrorist plot aimed at turning a most of the Los Angeles basin and half of Nevada into a radioactive wasteland.
As Foster struggles to keep his guilt, anger, and frustration from boiling over, deal with his family’s grief and anger, an even bigger threat looms. Conspiracies mount as the Department of Homeland Security and FBI investigations merge and land in Mitchell’s lap. With time running down, Detective Foster must set aside the past and stop the home grown terrorists who want to kill millions of innocent Americans. The murder of a Department of Homeland Security officer and an attack on his partner complicate the picture. He refuses to step back from the case even when his partner is wounded and his supervisor orders him to. In the middle of that pressure, DHS and the FBI ask Mitchell to find missing Russian atom bomb and the ultimate suicide bomber before it is too late.
Nearly lost in grief over his loss, Foster finds himself falling in love with a strong woman who is drawn to the wounded warrior and his determination to survive. Just when he thinks the worst is over, he finds the joint Department of Homeland Security, FBI investigation is depending on him and a police department wrapped up in a major nuclear spill.
Mitchell is trying to cope with a city wide panic, find a revolutionaries a murderer , stop a bank robbery, and find a dirty bomb that could make a large part of California and Nevada uninhabitable. Tomorrow’s headlines will read, “Terror plot averted,” or “LA Radioactive.” The difference is down to one grieving, angry cop, his woman, a physics professor, and Mitchell’s stone cold determination to win a race to save tomorrow.

What Inspired You to Write Your Book?
The idea for this story began more than twenty years ago when I asked a simple question: “How does an atom bomb work?” This was before much of the technical information appeared on the Internet, so I went to my local small-town library. (Libraries are municipal buildings full of paper books.)Mine wasn’t very large, perhaps ten thousand volumes of fiction, nonfiction, and reference materials. I set out to discover the answer to my question and was astounded to find the answer in one afternoon.
I learned the history around the design, construction, and use of the two atomic bombs that were dropped on Japan at the end of World War II. I learned the basic design elements of the bombs, and within just a few hours, I discovered how much plutonium or uranium is needed to construct each of the designs used at the end of WWII.
I was amazed. I was astounded that I could find this information in an afternoon. I didn’t have to break into a government facility or steal some classified document or even have a library card. You only need a library card if you want to borrow a book.
Some years later I began hearing about something called a dirty bomb; it was a new term in the nuclear lexicon. Originally, a dirty bomb was an atom bomb with a casing of some metal that would become highly radioactive when the weapon was detonated. This material would rain down on the surrounding countryside and render it uninhabitable for tens of thousands of years. Over time, people came to realize that radioactive materials do not have to go boom to cause a lot of trouble. Nuclear waste, spent fuel rods, and even the contaminated trash from a nuclear power plant could be used to contaminate large areas by the simple act of burning them. A few so-called spent fuel rods in the attic of a burning house in suburbia would kill many people downwind from the fire and probably several of the emergency responders. So the term dirty bomb came to mean a conventional explosive with nuclear material mixed in. You don’t get the incredible destruction of a nuclear blast, just the devastation of the fallout, radiation sickness, and death.

How Did You Come up With Your Characters?
Mitchell is a mixture of people I have known and features from my own past. I’ve know some people who were as damaged by war as Mitchell. Like Mitch, the people who survive are people with Iron hard will. Anna, Mitchell’s woman, is a strong woman who knows what she wants and how to get it. I’ve had the privilege of knowing women like that. A couple of characters in the book came right off the front page.. Some of the villains are named for actual people.

Book Sample
Alexi Mendelevich stubbed out his cigarette in an ashtray next to the door he had just walked through. The room was rectangular, with doors in the center of the short sides and small platforms for speaker’s podiums. It had been divided into two almost-square rooms by pulling out a divider from the wall on Alexi’s left to a point between the two double doors in the wall on Alexi’s right. The two rooms had been booked separately in a vain attempt to fool the feds. The Sheik’s men had insisted on that much deniability. The divider was pulled back to make an opening about six feet across.
Through the opening, Alexi saw a cadaverous man sitting in a black chair in front of the speaker’s platform at the far end of the other room. The Sheik was rumored to be suffering from cancer. Alexi could see from where he stood that the Sheik’s color was very poor. His dusky complexion reminded Alexi of ashes. Alexi walked to the four chairs arranged facing the black chair. The man rose to his feet, leaning heavily on an ornate cane, and held out a hand that all but swallowed Alexi’s beefy mitt. The giant he faced towered over his own six-foot-three-inch frame by perhaps another foot. A third man turned to Alexi and began the introductions.
“Brigadier Mendelevich, may I introduce Sheik Abu Sayyaf, leader and imam for the Independent Islamic Brotherhood of Boston. Imam Abu Sayyaf, this is Brigadier Alexi Mendelevich.” The two men looked each other over carefully and then sat down. The Sheik saw a middle-aged man dressed in a very well-tailored navy pinstripe. His hair was well groomed and his hands newly manicured. Alexi wore an expensive gold watch and several gold rings. The Sheik knew that the Russian was as dangerous and as unpredictable as a desert storm. He smiled warmly. “As-Salaam-Alaikum,” he said.
“Wa-Alaikum-Salaam,” Mendelevich replied as he watched the Sheik resume his seat and knew the man was at least as ill as the reports said he was. His people believed that the illness had affected the man’s mind and made him unpredictable. Alexi knew the man insisted on being referred to as “the Sheik,” as if he were the only one in the world.
The Sheik wore a diaphanous, gold-cloth bisht cloak over a fine, white silk thobe—the long robe worn by Muslim men. The bisht made it look like he was floating in a gold cloud. The Sheik was barefoot. The clothes hung on his frame. His clothing did little to conceal his skeletal condition and the ravages of cancer treatment. The chair was larger than any chair Alexi had ever seen in day-to-day use. It was filled with pillows and fit the Sheik’s large frame. When the Sheik sat down, a servant placed a small pillow at his feet and then covered his lower body with a cloth of gold coverlet. On the other side of the small platform, a young man in dark glasses stood like a statue. He held an ugly but efficient AK-47 diagonally across his chest. Two other servants stood near the bodyguard. Behind the trio, a set of curtains had been pulled aside, revealing the door Alexi knew was there and demonstrating there was nothing concealed there.
“Brigadier Mendelevich, may I offer you some tea or coffee?” the Sheik offered.
“Coffee would be most welcome, Imam. Please, call me Alexi,” Alexi replied with a smile.
The Sheik waved his hand. A male servant in a white shirt and black pants placed a small folding table to Alexi’s right. Another servant, a woman covered from head to toe by an abaya so deep blue it was nearly black, poured the coffee into a delicate cup. Alexi was startled to realize that the woman was tall and that the thin strip of her face he could see was ivory white with a few freckles and a pair of very green eyes. Her hands also showed her Northern European heritage. When she noticed Alexi’s attention, he got the impression she was smiling at him.