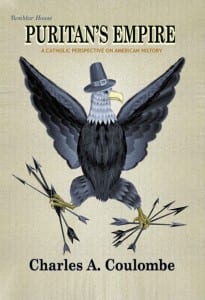 A Catholic Perspective on American History.
History is the key to understanding men-whether as nations, families, or individuals. For Catholics, history has an even higher purpose beside. For them, history is the unfolding of God’s Will in time, and the attempts of men either to conform themselves to or to resist that Will. But American Catholic historians have generally refrained from exploring their own national history with these principles, preferring instead to adopt the analysis of their non-Catholic colleagues, save when looking at purely Catholic topics (and sometimes not then). It is vital then, for Catholics, especially young Catholics, to have a good and proper understanding of their country’s history. To exercise their patriotism, they must work for the conversion of the United States; to do this effectively, they must understand the forces and events which brought forth not only the religion of Americanism and the country itself, but also the sort of Catholicism which, in 300 years, failed so dismally to bring this conversion about. This book attempts to reinterpret the better known episodes of our history in accordance with the Faith, and to point up lesser-known details which will give factual proof of the truth of this reinterpretation.

What Advice Would You Give Aspiring Writers?
Never give up.

Author Bio:
Charles A. Coulombe was born in New York on November 8, 1960. At an early age, his parents took him to Hollywood, California, where they lived in an aparment building owned by famed televesion psychic, Criswell. Coulombe has lectured on a wide variety of historical, religious, and political topics on three continents, and did commentary for ABC News on the death of John Paul II and the election and installation of his successor. He is the author of numerous articles in many journals, and of nine books, most recently The Pope’s Legion, on the 19th century volunteers for the Papal army, from Palgrave Macmillan. Puritan’s Empire represents the culmination of over 30 years research and thought on the real meaning of American history today.