You are here: Home / Fiction / Historical / Prophecy by Coreena McBurnie 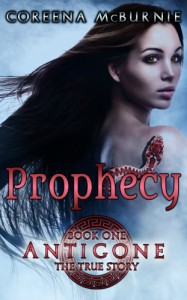 A hidden prophecy. A chosen princess who speaks with snakes. A family duty.

Sixteen year old Princess Antigone, daughter of the infamous ancient Greek King Oedipus, wants to lead a normal life and fulfill her duty to the gods, her city, and her family, but fate has other plans. The Olympian gods bless her, the snakes talk to her, her parents want her to marry a foreign prince, her embroidery looks like burial shrouds for dogs, and she has fallen in love with the wrong boy.

When the mysterious and devastating prophecies surrounding her family are revealed, Antigone must choose where her allegiance lies: With the gods who have betrayed her family but who she is obliged to serve? With her plague ridden city? With her family which lay in ruins? Or even with herself?

In Prophecy, Book One of the Antigone: The True Story series, Antigone steps out of the shadows of the past to tell her own story, a story where truth of history is stranger than the fiction of myth.

What Inspired You to Write Your Book?
I have a passion for Greek myth and love reading modern retellings of old stories. I thought Antigone would be fun to write about, so decided to sit down and see what she had to say. Turns out, there was a lot.

How Did You Come up With Your Characters?
I have always loved the character of Antigone. She’s the daughter of Oedipus, famous in Greek myth for killing his father and marrying his mother, then blinding himself when he found out. Antigone is a wonderfully strong character and I wanted to bring her to life for a modern audience.