You are here: Home / Fiction / Private Lines by Emma Gates 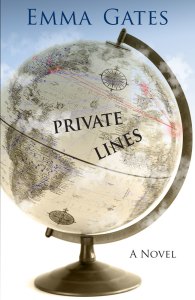 It’s tough to compete in the global marketplace when you’re an American stuck in Paris during the biggest anti-U.S. protests in European history. No wonder Tyler Harding is tired! He just wants to strike an agreement for his telecom company and get some sleep. But the intriguing Frenchwoman in charge of his deal intends to wake him up – in more ways than one.
Meanwhile, in the company’s Milwaukee branch, account exec Carly Emerald is juggling the demands of her defense-contract client and its government promoter; her increasingly obsessive lover; her cancer-stricken mother; and the office security monitor handing out duct tape to secure the windows.
Tyler and Carly cannot seem to catch a break, but when they catch sight of each other during a videoconference set up by Carly to enlist Tyler’s help with her awful London client, sparks fly … until a their company’s international accounting scandal threatens not only their fledgling friendship but their entire careers.
Private Lines begins during the same events as Ian McEwan’s “Saturday”, but its point of view is uniquely – and poignantly – American.

What Inspired You to Write Your Book?
I was opposed to the war the U.S. launched against Iraq in 2003. I worked in an industry I loved – global telecom – where new initiatives were interchanged with and benefitted directly from ‘the war effort’; yet many of my colleagues were as conflicted as I: both about the war itself and about our government customers. I actually joined demonstrations against that war and was outnumbered by police. Those of us who didn’t support Shock and Awe were made out to be unpatriotic.

Around that time, during a gathering of women friends, one pal asked us all as whom we’d rather be reincarnated: a woman or a man? Most of us, including me, said of course we’d rather be women since ‘we’re so much more flexible, more able to multi-task, more in touch with our emotions,’ et cetera (we were mostly career-driven working mothers and feeling pretty self-important about our do-it-all stellar abilities in those days). However, one friend said she’d come back as a man – but only as a young, good-looking, healthy, successful ‘mainstream’ American – because she’d like to know how it felt to be a ‘master of the universe.’ This was said somewhat tongue-in-cheek since we’d also been discussing the nature of America’s newly revived warrior status.

As soon as I envisioned my ‘master of the universe’, as a novelist, he was beset by problems, and I got a kick out of him, and followed his and his cohorts’ adventures with keen interest. I enjoyed every sentence in writing this book!

How Did You Come up With Your Characters?
Tyler and Carly came up with me to invigorate their story into language.

About the Author:
Award-winning writer Emma Gates was born in New York and spent her childhood in England. She earned a BA in Spanish/Latin American Studies from Indiana University Bloomington, and an MBA with concentration in Arabic/Middle East Studies from Thunderbird. She worked for three years in Mexico and five in Saudi Arabia. She is an international trade and telecoms specialist currently living near Chicago with her family and two inscrutable cats.