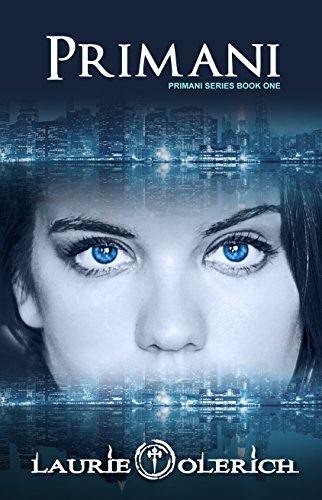 Budding psychic Mica is a walking miracle. After surviving a brutal attack, she vows to live each day to the fullest. Little does she know her life is no longer hers to control. When Tall, Dark, and Annoying shows up to shadow her, she’s intrigued…

Powerful and ruthless, Sean’s assigned to guard more than Mica’s body. Her future is at stake, and it’s his job to keep her on the right path. There are plans for her. Plans that’ll change everything she believes if she lives long enough to learn the truth. Guarding one human shouldn’t be this complicated, but Mica makes it anything but easy.

As the clock ticks, Sean pulls Mica deeper into the Primani world until there’s no way out, and she doesn’t want to leave.

What Inspired You to Write Your Book?
I wanted to write my life story, but realized after chapter one that my life was way too boring for a book. Sure, there were cool moments here and there, but overall…not too exciting. So I decided to create the life I wish I’d had. Primani is all about action, secrets, supernatural powers…and sizzling heros with bad attitudes but cool toys. Yeah, this is totally the life I wanted!

How Did You Come up With Your Characters?
The idea had been tickling the back of my mind so I sat down and dove in head first. Where to set the story? New York, of course! One of my absolutely favorite places, upstate New York became the setting. Male characters? Well, they had to be hot…dangerous…supernatural powers to keep things interesting…bingo! Primani! Not quite angels, but created from the archangels to keep chaos in check and demons under control. Super soldiers in their own time, once they were made by the archangels they gained immortality and very unique powers.

There had to be a woman, so I could live out my own daydreams! Mica and Sean came to me immediately–they just wanted their story to see the light of day. What’s not to like about an impossible attraction? Young love and passion? Oh, and kick ass snow sports set in the high mountains of New York and Vermont? These two characters were almost too easy. But then Killian and Declan came along. These two Primani completed the circle of family that I wanted to create. Killian’s character started out in a support role, but very quickly took over as one of the strongest of the group. By the time I’d gotten to Call the Lightning, Killian was shoving his way into every scene and demanding to be center of attention. It’s funny how characters do that!

Stone Angels brings Mica’s story to an end. Her transformation from simple human to an immortal with a direct link to Armageddon is paced across all three books. She cannot get to the end without the help and love of Killian, Sean and Declan. The four are forever connected by blood and saol.

Because real life is about more than finding true love and having great sex, my characters face devastating losses, painful truths, and choices that tear them apart. Exploring what makes us human is what I enjoy about writing. I love to put my favorite characters into painful situations and then watch how they handle it. Sure, I’m mean to them, but they like it!

Book Sample
Awkward doesn’t begin to describe the atmosphere in the foyer. We’d gotten dressed for the mission and were in the foyer getting ready to leave. Sean was adjusting my body armor for the second time when Dec came in. Regardless of what he did or didn’t know, I turned purple with embarrassment. Dec didn’t say anything to me but I saw the questions in his eyes. He looked from me to Sean and back again. He knew something was different but didn’t ask. His eyes settled on my mouth. My lips were puffy and slightly red from Sean’s kisses. He knew! I stared at the floor in embarrassment. Sean ignored him while he adjusted my mic with a professional attitude. When he accidently grazed my neck with his knuckles, I felt the effects of it down to my toes and Dec snorted with amusement.

“What?” I whispered to Sean.

He looked down at me and shook his head with some humor. Dec snorted again just as Killian walked into the room. His expression was colder than I had seen it in years. His disapproval cut like a knife.

He looked from me to Sean and asked, “Why is she glowing? What did you do to her?”

I nearly burst into flames right then and there. Mortified, I turned my back on them and buried my face in my hands. This time, I intentionally sent a plea to him. Please, Killian, don’t be disappointed in us. There’s no more time! Please…don’t cut me out! My emotions were already on edge and I caught a sob before it formed.

And this is what you want from Sean? Killian asked me silently, his voice rough inside my head.

No, I want everything from him. But this is a start.

Still playing with fire? His tone was softer now.

Sean put an arm around me and turned me around again. He whispered to me, “It’ll be okay. Trust me.”

He faced the others and made an unequivocal statement that left me stunned.

About the Author:
I write dark urban fantasy romance that blends the fast action and world building of urban fantasy with steamy sex, deep emotional connection, and strongly bonded characters. In my Primani series, the men lean toward alpha without the chest thumping and peeing on the doorposts. Powerful, ruthless, immortal, they’ve been known to take charge and show a woman a good time…sometimes for eternity! Between their wicked weapons and supernatural powers, they’ve got the demon problem under control–mostly.

When I’m not writing, I’m hanging out with friends, reading, or catching up on my Supernatural fix. I’ll be the first to admit to a fan girl obsession with Dean Winchester. There’s no way to deny it. It’s sad really. He’s my guilty pleasure…maybe with a glass of Jim Beam…and my spotted muse, Dalmatian Princess Domino.