You are here: Home / Fiction / Horror / Pray for Darkness by James Michael Rice 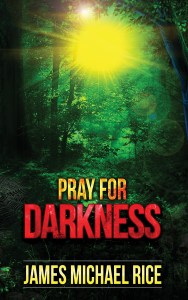 Pray for Darkness is the story of three twenty-something year old friends—Ben, Auggie, and Cooper—who head to the Amazon in the hope of creating some lasting memories before they are completely saddled by the drudgery of everyday life. Once there, they arrive at a rustic jungle lodge, populated by tourists hailing from around the world, and are immediately entranced by the fragile beauty of the forest and its creatures. However, it does not take long for their wanderlust to kick in, and they decide to up the stakes by venturing even deeper into the jungle to spend a few days at a remote campsite.

Under the watchful eye of their native guide, Ernesto, they abandon the relative safety of the tourist lodge and head to the remote camp in search of a “true” adventure. But when their riverboat captain is murdered and their boat disappears, their dream vacation quickly becomes a real life nightmare. Now they must brave the dangers of the wild as they make their way back to civilization.

And they are not alone.

A tribe of hungry corpses has detected the presence of the human intruders, stalking them under cover of darkness. Now Ben and his friends must use every resource at their disposal in order to survive the journey back to safety.

What Inspired You to Write Your Book?
In my new novel, Pray for Darkness, I drew from a wealth of personal experience while writing about an ill-fated adventure trip into the Amazon.

While developing ideas for the novel, I journeyed deep into the Amazon not once, but twice, in order to experience the jungle and all of its glorious (and potentially lethal) flora and fauna firsthand.

How Did You Come up With Your Characters?
The characters are about 95% fiction; the other 5% comes from various people I’ve met during my travels to some of the more far-flung places of the world. I try to create realistic characters that the reader will care about, despite any flaws (and sometimes because of these flaws.) Although I write mostly in the horror genre, my stories tend to have a few tender moments. I want my readers to care about the characters long before the danger comes.

About the Author:
James Michael Rice is the author of Rebel Angels, A Tough Act to Follow, The Still, and Pray for Darkness. He lives in Southeastern Massachusetts, and recently appeared in “The Bridgewater Triangle Documentary”, the first full-length documentary on New England’s own paranormal hotspot.