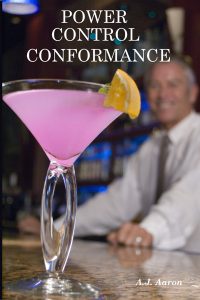 When Roland Vandergrift, a psychopath with a PhD in Neuro-physiology and Psychiatry wants something, he always gets it. Or does he. Will Sedric Jace, a high degree empath with a PhD in Physics, become like his psychopathic boss and mentor, Roland Vandergrift? Will Sedric be lured into the world of power, control, and conformance and help Roland achieve world domination?

Enter a world of big business where Lean Transformations have enabled massive reductions in work forces and closing of manufacturing plants. A world where the women are turned into stepford wives through the use of pharmaceuticals that affect their DNA to keep them subservient and devoted to men. A world where secrets are shared amongst a few privileged elite, in a special club where secrecy violations are met with the penalty of death.

If a high degree empath can hear others’ thoughts, experience their feelings, and heal others, can a cold and calculating psychopath be the other end of the scale and capable of causing death purely through intention?

It is known that one in every 25 people is a psychopath. That doesn’t mean they are killers and many make excellent CEO’s, commanders, and leaders. They learn to fit in well and present some of the emotions of normal people without becoming emotionally involved with decisions. However, to them, other people are still no more than objects moving through space.

Empaths are less well known since they never cause harm and fit well into society as caring and empathetic persons. Some intuit others’ feelings, while high degree empaths can even read minds and heal.

Can empaths be turned into psychopaths and use their powers for killing instead of healing?

What could possibly replace power, control, and conformance in this world? Can these three methods, used for centuries by governments, the military, and religions to amass wealth, create empires, and shape society, be replaced, or should they simply be accepted since that is how the world works.

Join Doctor Sedric Jace in his quest for answers.

What Inspired You to Write Your Book?
I’ve always been intrigued by the way some people can have so much empathy for others. Some so much so that they claim to feel what others feel, even their thoughts, and some may even heal others. On the opposite side of the spectrum is the psychopath who feels nothing for others and is cold and calculating. Can these two ends of the spectrum be turned one into the other?

If a high degree empath can hear others’ thoughts, experience their feelings, and heal others, can a cold and calculating psychopath be the other end of the scale and capable of causing death purely through intention?

It is known that one in every 25 people is a psychopath. That doesn’t mean they are killers and many make excellent CEO’s, commanders, and leaders. They learn to fit in well and present some of the emotions of normal people without becoming emotionally involved with decisions. However, to them, other people are still no more than objects moving through space.

Empaths are less well known since they never cause harm and fit well into society as caring and empathetic persons. Some intuit others’ feelings, while high degree empaths can even read minds and heal.

My intention with this book was to explore these possibilities.

How Did You Come up With Your Characters?
The characters were ones that in one way or another, I have met in life, and I’m sure others have as well. The unfeeling boss, the helpful and concerned friend, the borderline psychopath and the magical empath.

Book Sample
“Ours not to reason why, ours but to do and die.”
Alfred Lord Tennyson

“Peter, it’s all well and good the Lean teams and TPS were able to increase efficiency and gain us four more percentage points on profits. But that’s not the end of it.” Roland Vandergrift, the owner and CEO, was pushing Peter, the president, to increase profits across the organization.

Peter wiped his palm sweat on his custom-tailored, wool blend pants. His eyes pleaded as he looked at me then back at Roland. I reported to Peter as the vice president.

Peter leaned forward across the desk toward Roland. “But Roland, there isn’t much more to squeeze from our workers. Yes, there will always be more, but the numbers you’re looking for won’t come about for a few more years.”

Roland leaned back in the ergonomic chair behind his high tech, gloss black, spaceship of a desk—something you’d expect to see Darth Vader behind as he controlled the Death Star. His cheekbones were as high as the tech of his desk. His eyes looked unemotionally at Peter and his full lips were squeezed together slightly as he thought of his response.

Roland stared unblinkingly into Peter’s eyes and let him sweat some more. He changed his focus to one of the touch screens on his desk and paged through it with a fingertip. “Looking at the efficiency improvements by plant and extrapolating the reduced labor, due to your excellent work we now need, well, we should toss about two thousand heads.” He turned his gaze back to Peter. “Why shouldn’t we do that now?”

Peter nodded in agreement. “Of course, we’ve saved that much labor already, but when we went into this program we agreed we wouldn’t lay anyone off unless we were losing business. We’ve gained business and improved profits and if we cut those heads now, the remaining people will lose all motivation to work on any other improvements.
“Besides, they’ve reduced overtime because of it and that’s further impacted profits. The process will stall if we lay them off now and we won’t obtain the gains to be had year after year.” He sat back with slumped shoulders.

Roland nodded as if he knew what he needed to do. “How old are you Pete? Fifty-five or so?”

“Yeah, fifty-five next month. Why?”

“Well, maybe we can make a deal. You obviously aren’t marching to the drum anymore. You’ve gotten off the bus. I need someone in your position to do what they need to do. Why don’t you let me draw up a nice golden handshake for you? Something so you’ll never need to worry about anything financially. Full medical coverage and a king’s salary.” Roland flashed a condescending smile. “You’ve served us well and deserve to be rewarded.”

Peter looked at me and back to Roland. “I’m too young to retire. Besides, I love my job. I’m not getting pushed out of here. We made thirty-three percent last year at the bottom line with a gross margin of forty-eight.”

Roland’s eyes showed his anger. He took a deep breath and exhaled as he stood. He came around the desk. Peter swiveled his chair, following him with his eyes.

Roland leaned down toward Peter and put his hands on the arms of Peter’s chair. His straight brown hair fell away from his forehead and his tie fell forward, pointing like a dagger toward Peter. He flattened his lips together, looked deep into Peter’s eyes. “I want thirty-seven percent on the bottom. You don’t want to do it. I’ll draw up your parting papers.” Roland stood erect.

Peter was shaking his head. “No, I won’t sign any. I’ll go to court first.”
Roland walked back behind his control platform and sat down. Peter’s face was red and he was blinking rapidly. Roland locked eyes with him.

I could feel Peter’s panic. He felt he was about to die!

Peter’s expression changed to one of pain. He held his head. “Fuck!” He looked at Roland as if Roland was causing the pain. “How the hell? Ahh!”

A drip of blood fell from his ear, then another, then a stream. His pupils dilated. He slumped in his chair. His head fell limp on his shoulder.

Roland looked at me as he picked up his phone and held it. “Wow. Must have blown a gasket somehow. Poor Pete. I guess he just wasn’t that good at handling stress. Such an untimely demise. I was going to give him such a good package, too.” He tapped the phone on the desk slowly while he stared unemotionally at me.

“Well, Sedric, you’re next in line. I mean, the president’s position is open and I want you to take it. You know what you need to do now, go do it. Get rid of those two thousand bodies. Oh, and take tomorrow off. It’s Friday anyway and we need to make it look like we’re in mourning. It’s going to make a mess of the weekend with the funeral and all anyway. Go now, Mister President.”