You are here: Home / Fiction / Horror / Portraits of Pain by MW Sims 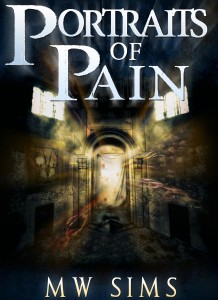 “THE EMBODIMENT OF TORTURE AND SUFFERING, MASTERFULLY CRAFTED ATOP A CANVAS.”
Eric Bishop is commissioned by a mysterious art collector for the recovery of a rare, nearly-mythical painting which is said to be the vista to a realm of suffering and torment, driving any who view the horrid canvas into a murderous-rage. That painting is The Portrait of Pain.

Plagued with anxiety from a haunted past, and only motivated to save the life of his ailing daughter, Eric sets out to investigate the whereabouts of the painting. Though his skepticism initially causes him to be indifferent toward the horrific lore surrounding the portrait and its artist, he soon discovers something far more sinister awaiting him . . .

What Inspired You to Write Your Book?
Several things, the first being my obsession with the theory of unseen dimensions. “What if someone was able to capture something we aren’t able to see, and, somehow, show it to us?” I thought. Needless to say, it turned into a great premise. One of the other important things about this book is it is a reflection of humanity; every person, every face, and every life has suffered in one way or another (some more than most). Some people have suffered to the point which their pain is clearly noticeable in their eyes. I’ve always looked at people and tried to read them, study them, like a painting.

How Did You Come up With Your Characters?
All of the characters share portions of my own personality (yes — even the ‘bad guys’). The main character, Eric Bishop, is sort-of the underdog in this story, just as I’ve always felt to be. He is plagued with anxiety, and struggles day to day. He is finally met with a challenge he fears he can’t accomplish, but with no other options, he takes on the challenge. Everything literally works against Eric, yet he continues on, determined.

Book Sample
Police sirens wailed in the distance attending to the chaos at Cedar Hall as embers from the burning barn floated weightlessly through the sky and to the infinity above, the nearby trees began to catch fire as a result of the mob’s poorly-planned execution attempt. Though they knew they had been responsible for killing the man inside, they deemed it to be necessary, looking on in delight, watching the barn become fully engulfed as Hagstrom shrieked from inside his fiery grave. Thunderous cracking sounded from a nearby flaming tree just before its collapse, the gigantic piece of lumber crashing through the roof of the barn and blowing cinders and flames onto several of the nearby onlookers, the gasoline canister next to them combusted and liquid flames splashed across their bodies, another result of their poor choices. Alarmed, the others removed their jackets and attempted to put out the flames which ate away at their friends, however, the gasoline-fueled inferno had been far too strong to extinguish as their skin boiled, melting away, and their muscles beneath cooked.
Lead by the blooming beacon of the firestorm, a Sheriff’s Deputy arrived at the scene, the officer exiting the car looked on, frozen in complete awe. The officer radioed for fire assistance before demanding the patrons step away from the barn and their burning friends. Though they struggled to save their quickly-melting associates, they ultimately knew the rapidly-charring bodies were beyond rescue. Complying with the officer’s orders, they stepped back, yet maintaining their entranced gaze upon the blazing mayhem.
“What the hell is happening?” The deputy asked.
The Bloodied Tux who set the barn ablaze looked to the officer, the reality of his actions sinking in as the foul odor of boiling meat passed through the air. “The necessary extermination of a vile disease,” he replied as several more police cars approached, painting the forest with a blue and red disco of lights.

Buy Portraits of Pain On Amazon