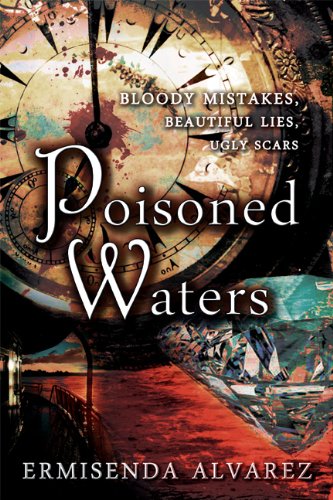 Helen Gardener is murdered on a trans-Atlantic cruise. The Diamond Royale sails from Southampton to New York with her murderer aboard. Set in the 1950s, Poisoned Waters follows the stories of seven unfortunate characters and how they are affected by her death. Was it merely an accident? Mr Phillips, the owner of the ship, and sponsor of the cruise, rules with an iron fist, in search of something or someone.

Lies spiral out of control as the suspects try to survive the final days on board. Conflicted by their sense of morals, greed, and lust, they realise what kind of people they really are. Who will rise? Who will fall? Who was Helen’s murderer?

It contains adult themes including death, violence, and sex scenes.

What Inspired You to Write Your Book?
I had always wanted to read a who-dunnit book with international characters on a 1950s cruise ship.

How Did You Come up With Your Characters?
I took a lot of personality traits, wrote them down, put them in a hat and drew them out one by one. That’s how I made the base personalities for all my characters. It was fun and different.

About the Author:
Along with numerous solo works, Ermisenda began writing on role play sites at fourteen and completed her first crime novel at fifteen. Driven by the desire to evoke the kaleidoscope of emotions her favorite authors are able to, she kept writing. Growing up bilingual amongst her Spanish family in Australia, she found a love and deep appreciation for language and the power it wielded.